"A huge day" is how Eddie Jordan described today's launch of the DHL Jordan Honda team. It might not have been the best kept secret in F1 over the past ten days, but the launch itself certainly proved to be one of the most innovative presentation ...

"A huge day" is how Eddie Jordan described today's launch of the DHL Jordan Honda team. It might not have been the best kept secret in F1 over the past ten days, but the launch itself certainly proved to be one of the most innovative presentation ideas we have seen for some time.

It started off just like any other F1 car launch, with the main players on stage, going through well rehearsed questions and answers, before watching a film about DHL. 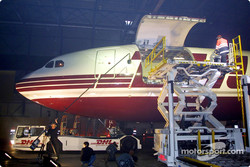 The new Jordan Honda EJ12 arriving at the DHL aircraft hangar at the Brussels airport.
Photo by Jordan Grand Prix.

Held in a huge DHL aircraft hangar at a foggy Brussels airport, the presentation was interrupted by a message from the Control Tower, announcing an urgent DHL delivery for Eddie Jordan. A massive cargo Airbus appeared on the screen, looming out of the fog, completing a fly past, before the hangar doors swept open and the 52 metre long plane in full DHL livery was towed into the presentation. The side door opened and out slid the EJ12, under wraps on a pallet.

To the obligatory accompaniment of dry ice and loud rock music blaring out of the PA system, the car was rolled onto the stage, where Giancarlo Fisichella and Takuma Sato helped DHL staff pull the wraps off the car. Reinforcing the message that this was all part of a routine day's work for Jordan's new title sponsor, Eddie Jordan then had to sign a docket acknowledging safe delivery of his parcel. "Safe and sound, delivered by DHL," intoned the boss, proving that he might have learnt his lines, but winning an Oscar for acting might take a little bit longer! 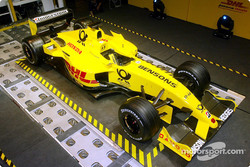 Drivers and the team's main players then posed for photographs, before embarking on the organised chaos that always signals the start of the media interviews, when the "real" questions get asked. Takuma Sato dealt with this new experience as coolly as he has handled everything else about his new life in F1, while old hand Giancarlo Fisichella deftly dealt with the media, showing off his bilingual Italian and English skills. The Honda men commandeered the team motorhome, also in the hangar - yes it was that big! And Eddie Jordan was happy to perch on a stool handing out bon-mots, as well as the occasional brickbats if he felt the question demanded it!

The fact that the EJ12 had only left the factory a couple of hours before the midday (CET) presentation and would be back at base in time to be packed off to Stansted with the rest of Jordan's equipment for the Australian GP, was the most astounding element of the day. Jordan might have been almost the last team to launch its 2002 challenger, but it had certainly done it in style.