The first-ever Detroit Grand Prix in 1982 was an often chaotic but highly memorable event, as Formula 1 got its lucrative second race in the United States – a late replacement for Watkins Glen – to complement Long Beach way out west. McLaren’s John Watson surged through the field for a famous victory from 17th on the grid in a two-part aggregate race that was packed with incidents and overtaking.

Watson would, of course, go on to better this feat by winning from 22nd on the grid at Long Beach a year later, but claims it was this Motown race that had given him the supreme confidence of a true “street fighter”.

The event followed on from Monaco, and took place without Toleman – whose truck had broken down on the way back to England, stranding its cars in France so they missed the freight connection! The buildup to the race was equally chaotic, with planned practice sessions being cancelled due to drivers complaining about a lack of runoff and tyre barriers. 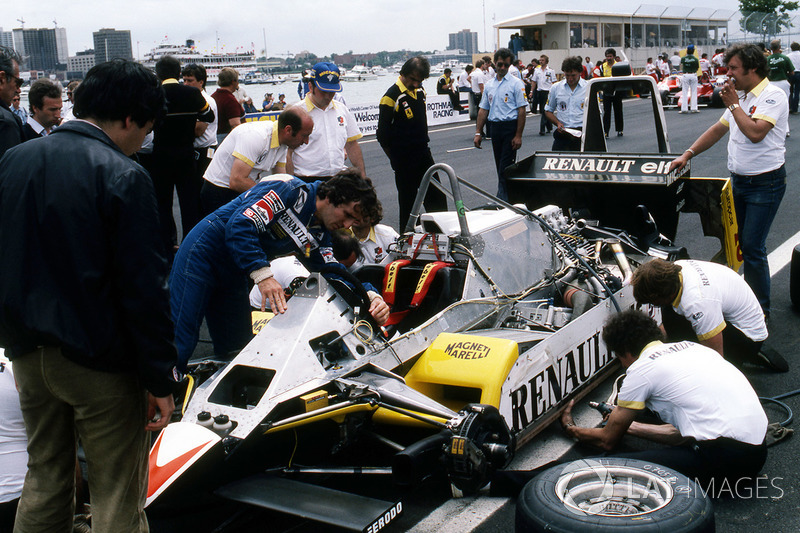 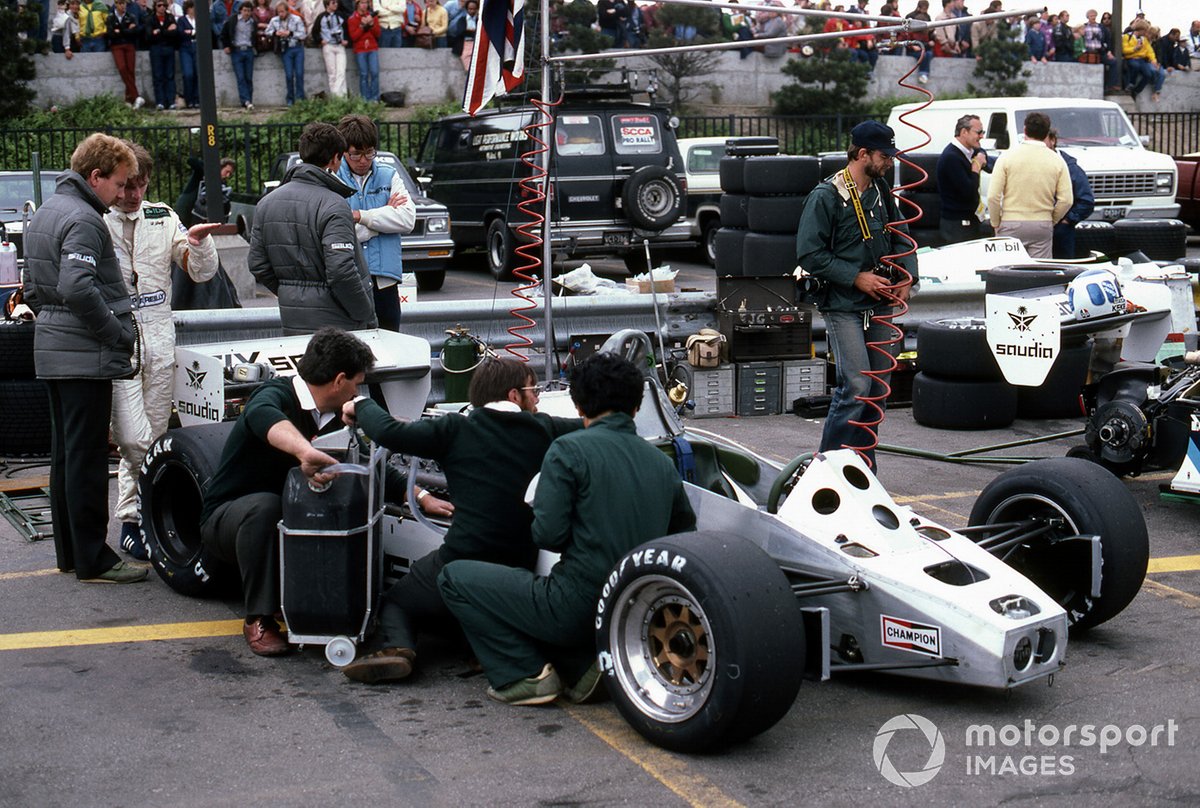 Derek Daly and mechanics work on his Williams FW08

The track’s layout, which was anti-clockwise and featured a tunnel, turned out to be even slower than Monaco! Jackie Stewart, who was commentating for American TV, declared it: “A very impressive racetrack indeed, a great home for a grand prix here in Detroit, Motor City, capital of automotive industry around the world.”

The points table was quite remarkable after six rounds, with Renault’s Alain Prost leading with 18, Watson on 17, Didier Pironi (Ferrari) on 16, Keke Rosberg (Williams) on 14, Riccardo Patrese (fresh from his crazy Monaco win for Brabham) on 13 and McLaren’s Niki Lauda on 12. Lauda's teammate Watson had his hopes of victory dented by a wheel-banging session with Chico Serra’s Fittipaldi, which resulted in the McLaren being towed back to the pits. He was forced into the spare car, and could only salvage a lowly 17th position on the grid. 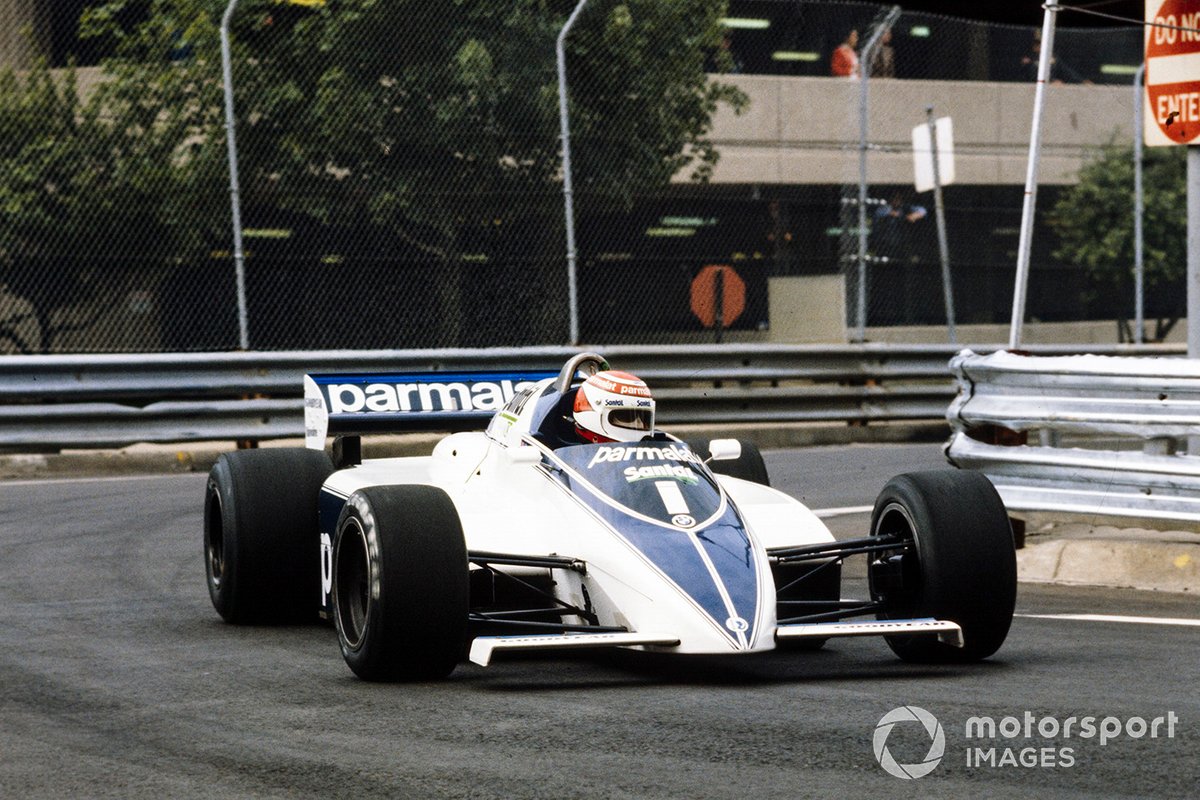 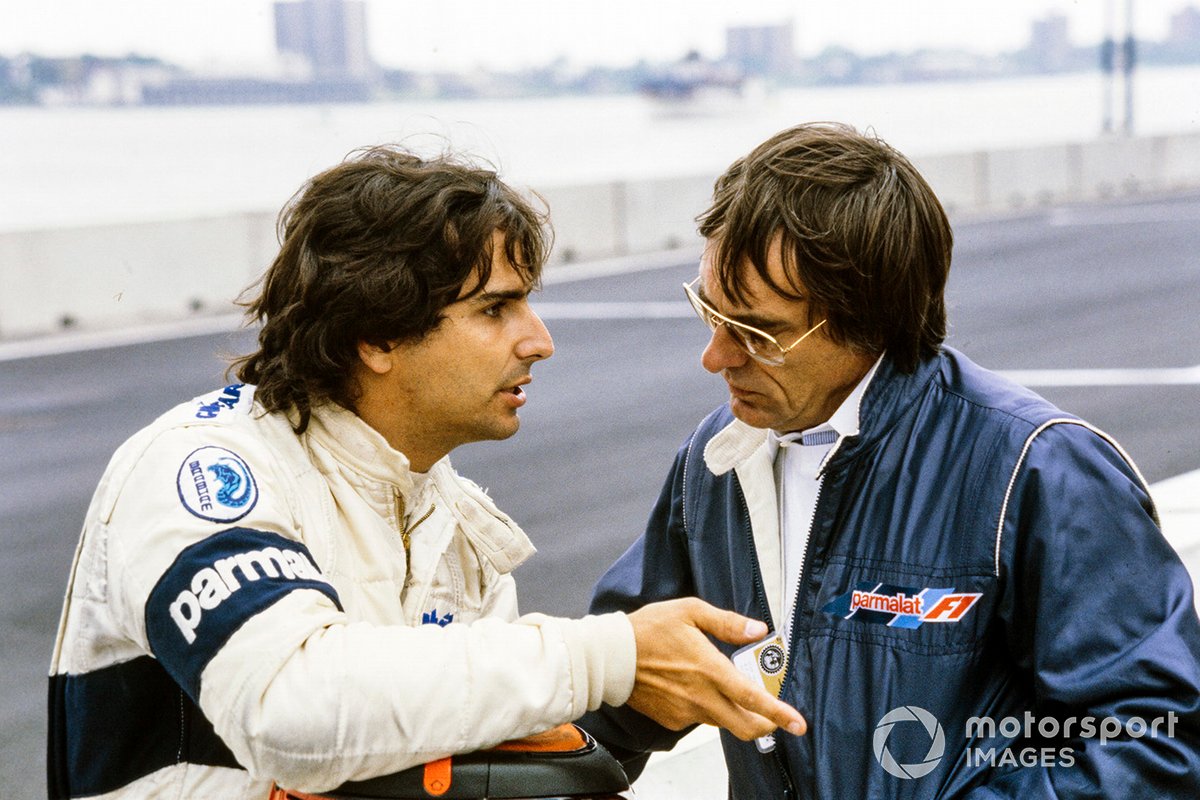 Prost took pole from de Cesaris, with Rosberg and Pironi – still in the sole Ferrari following Gilles Villeneuve’s death at Zolder – forming row two ahead of the impressive Manfred Winkelhock, with a career-best fifth for ATS. World champion Nelson Piquet (above) failed to qualify, after problems with the turbo BMW engines in both his primary and spare Brabhams!

From the start, Prost led from de Cesaris and Rosberg, while Winkelhock was an early casualty when a front hub failed and pitched him into the wall on Lap 2, all the more galling as he’d topped the times in Sunday’s warm-up. De Cesaris didn’t last much longer, as a driveshaft broke after he clipped a wall, promoting Rosberg to second. 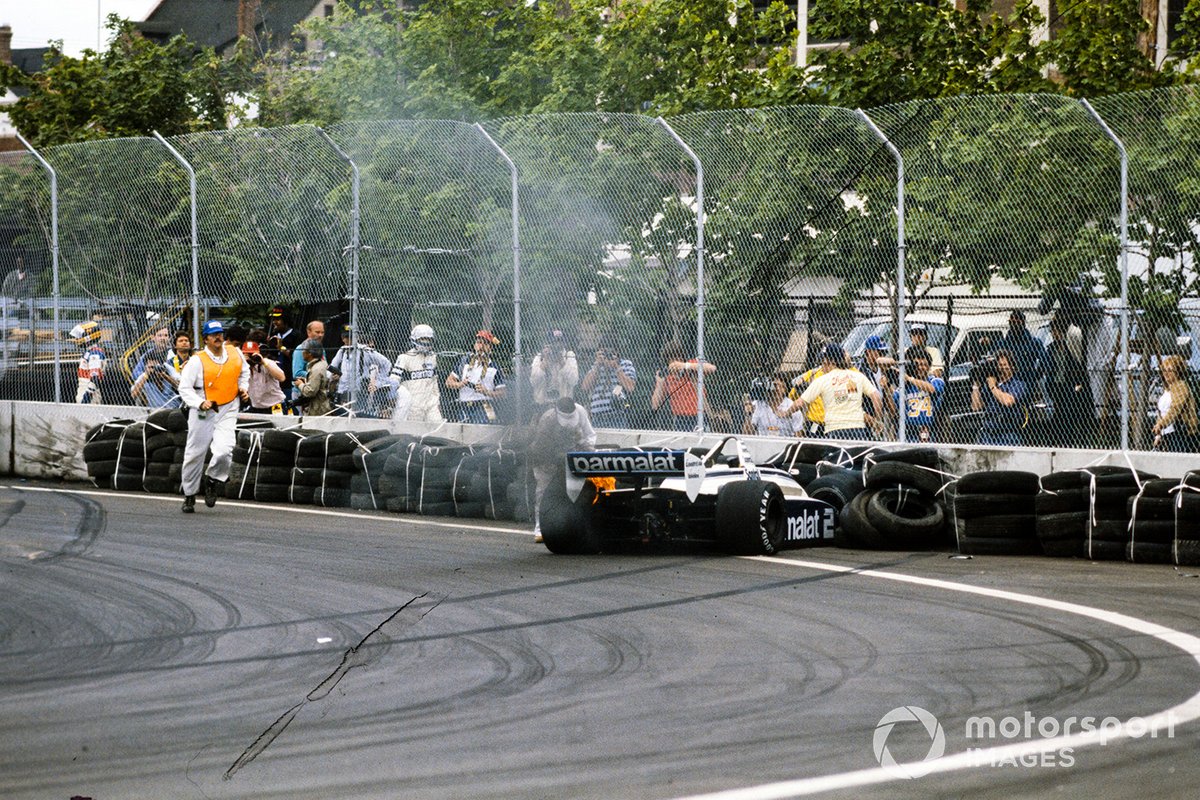 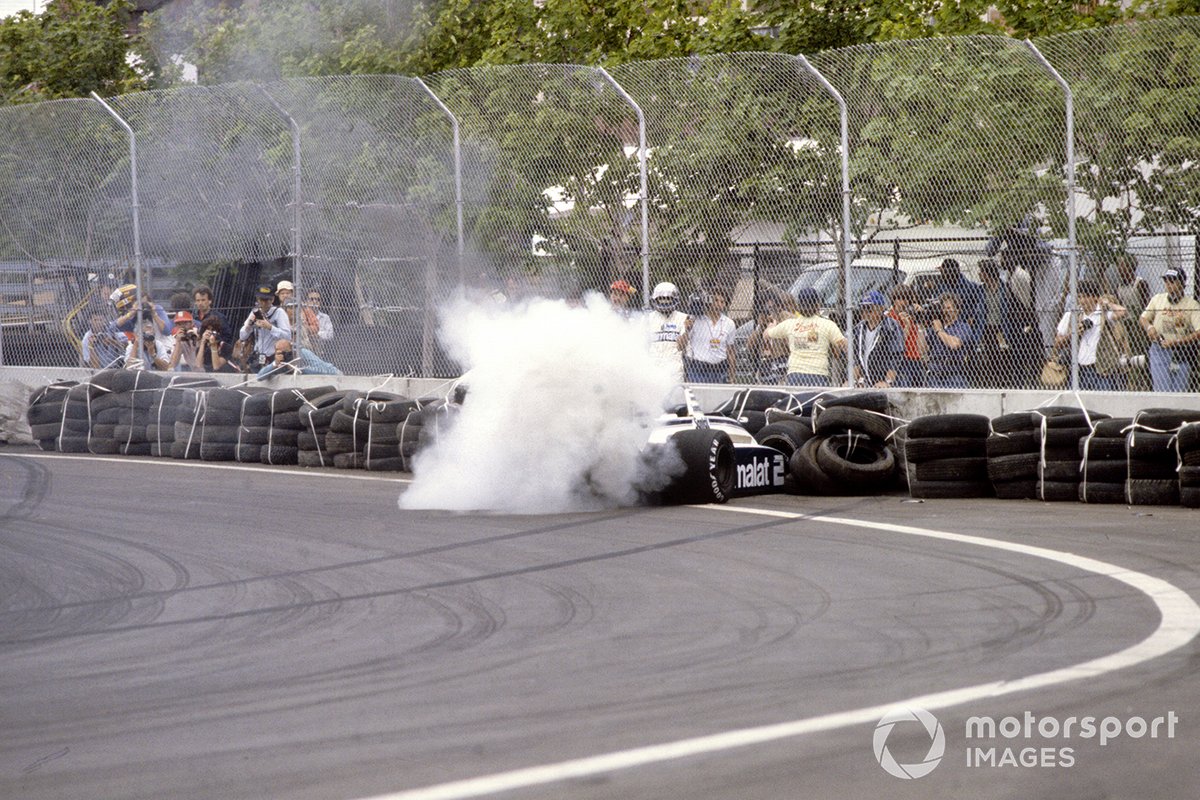 A chaotic incident on lap seven caused a red flag, as the Lotus of Elio de Angelis and Roberto Guerrero's Ensign clashed. Patrese shunted his Brabham in avoidance and his left-rear brake caught fire (above), with marshals struggling to extinguish it. Around the mess steered Watson, who’d seen the crash unfold right in front of him. 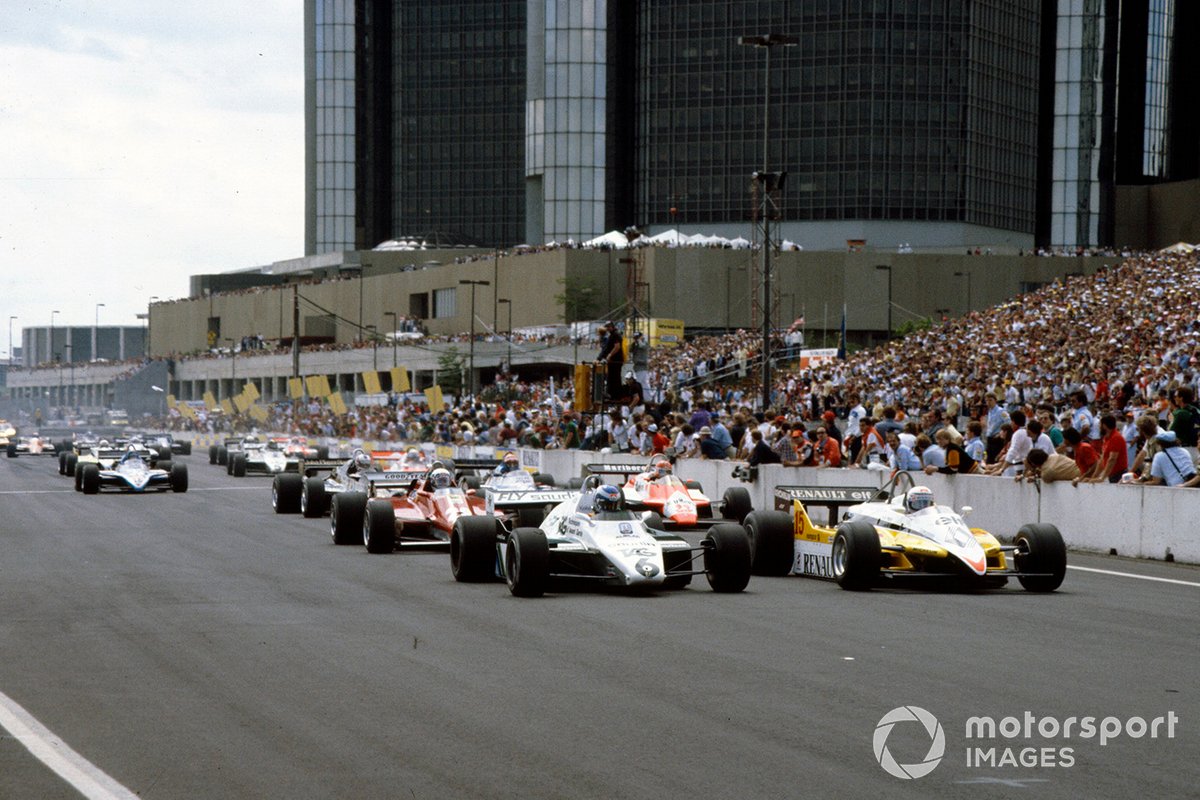 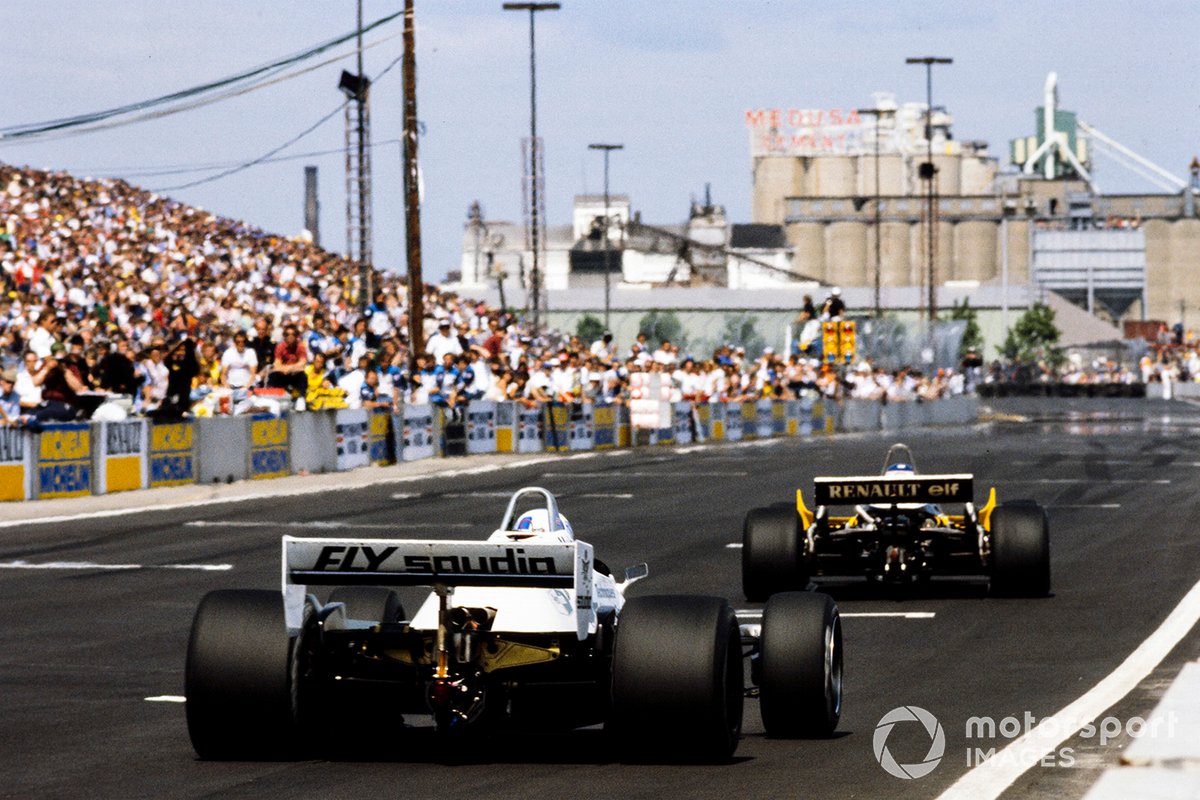 At the restart an hour later, Prost beat Rosberg on the sprint to Turn 1, the Renault outdragging the non-turbo Williams into the long left-hander that started the lap. Rosberg hounded Prost for the lead, and seized his opportunity – and briefly they banged wheels – in a left-right sequence of corners when Prost’s car hesitated. Prost had held a 3s aggregate lead over Rosberg, but that soon evaporated too.

Prost was suffering a problem with his engine’s electronic ignition system, which turned out to be related to the fuel-metering unit, and fell back into the clutches of a gaggle of cars led by brake-troubled Pironi, with home hero Eddie Cheever (Ligier), Bruno Giacomelli (Alfa Romeo) and Lauda right behind. 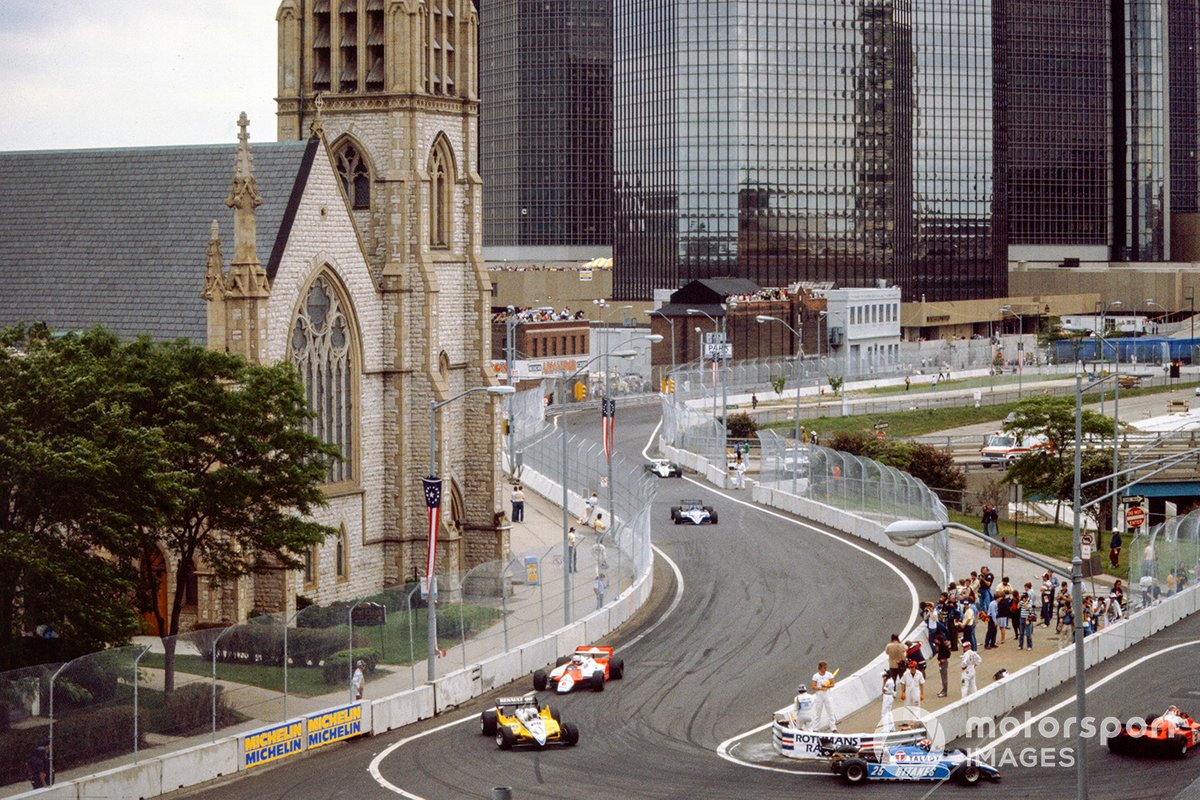 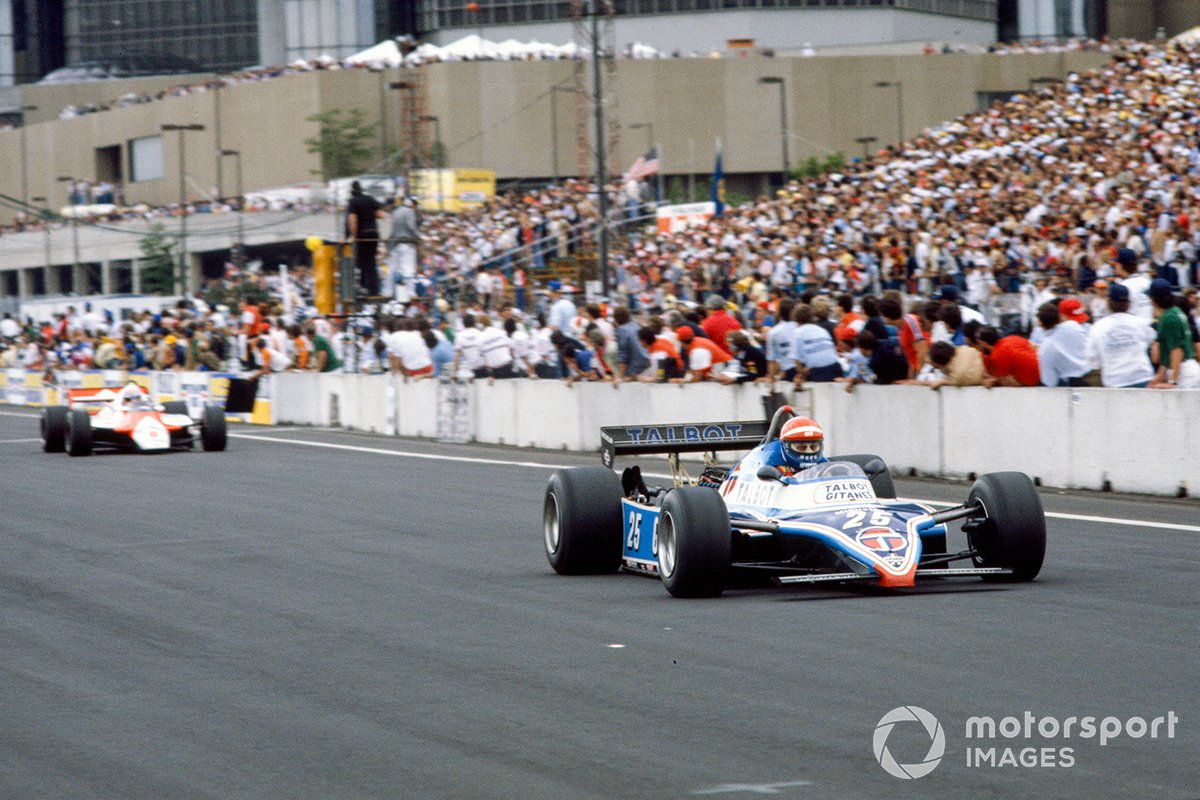 As Pironi passed Prost, the stealthy Watson latched on to this group in seventh – having taken the restart in 13th on the grid and worked his way through the field with metronomic progress. Prost fell further and further back, and was out of the points by Lap 28.

Watson passed Giacomelli on Lap 30, but Giacomelli retaliated when Watson made a mistake avoiding Lauda. The Alfa struck Wattie, but while that damaged the Italian's left-front wheel, the Ulsterman escaped unscathed.

Pironi now became the cork in the bottle, 21s behind Rosberg by Lap 32, and as Cheever hounded Pironi, Lauda allowed Watson to outbrake him at Turn 1, and Watson then made some amazingly bold lunges on Cheever and Pironi further around the course to gain three places in one lap. Considering the sinuous course had been described as one on which it was "impossible" to pass, Watson's latest effort triggered BBC TV commentator James Hunt into describing it as "a magic lap!" 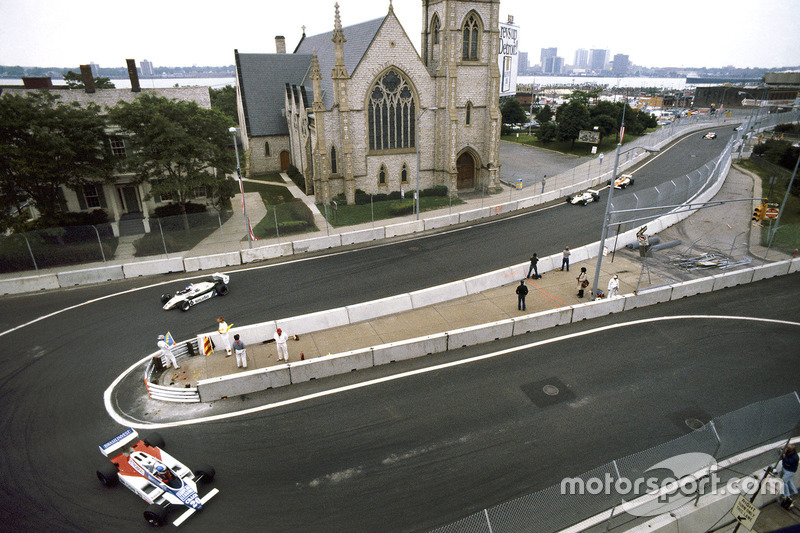 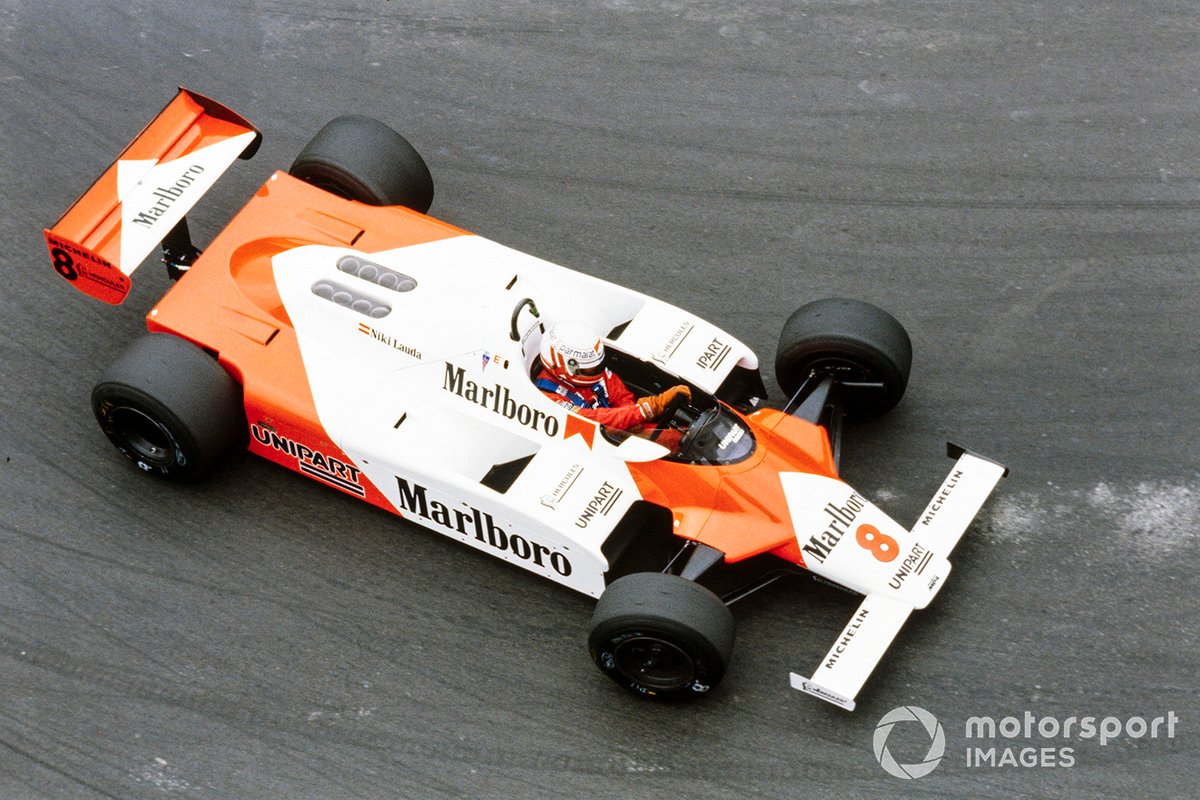 As Cheever toiled to pass Pironi, Lauda took his chance to jump ahead of him for fourth and the Austrian, who had triumphed at Long Beach, quickly caught and passed Pironi too. Watson was carving into Rosberg’s lead now, setting new lap records in his pursuit, and passed the eventual World Champion (on the road) on Lap 38, but when Lauda tried to pull off a similar maneuver, he shunted and broke his suspension.

“Silly mistake," admitted Lauda. "When I saw John coming through the field like a rocket, I wasn't using my head. I should have waited a little longer to pass Rosberg.”

Rosberg had a 13.2s gap over Watson from the first part of the race, but the Finn couldn’t keep up with the Ulsterman’s searing pace – so it wouldn’t be the day that Rosberg nailed his first grand prix victory after all. Watson finally overcame his aggregate deficit to officially lead the race on Lap 42.

“When Watson began to pressure me, I had to push the car hard,” said Rosberg. “Up until then it had been perfect, but it all began to fall apart. The brakes started to fade, the front tyres lost all their grip and then later in the race I lost third gear.”

This was one of the biggest gap swings in F1 race history, as Watson was 63s behind the leader on Lap 16, but just 35 laps later he held a 28s lead!

Rosberg fell back with his multiple issues, with Pironi blasting past him on the start/finish straight on Lap 48. But Cheever was the true star of the closing stages, passing Pironi for second when he “half shut my eyes and went for the gap – if he’d shut the door, we would have both gone off”. 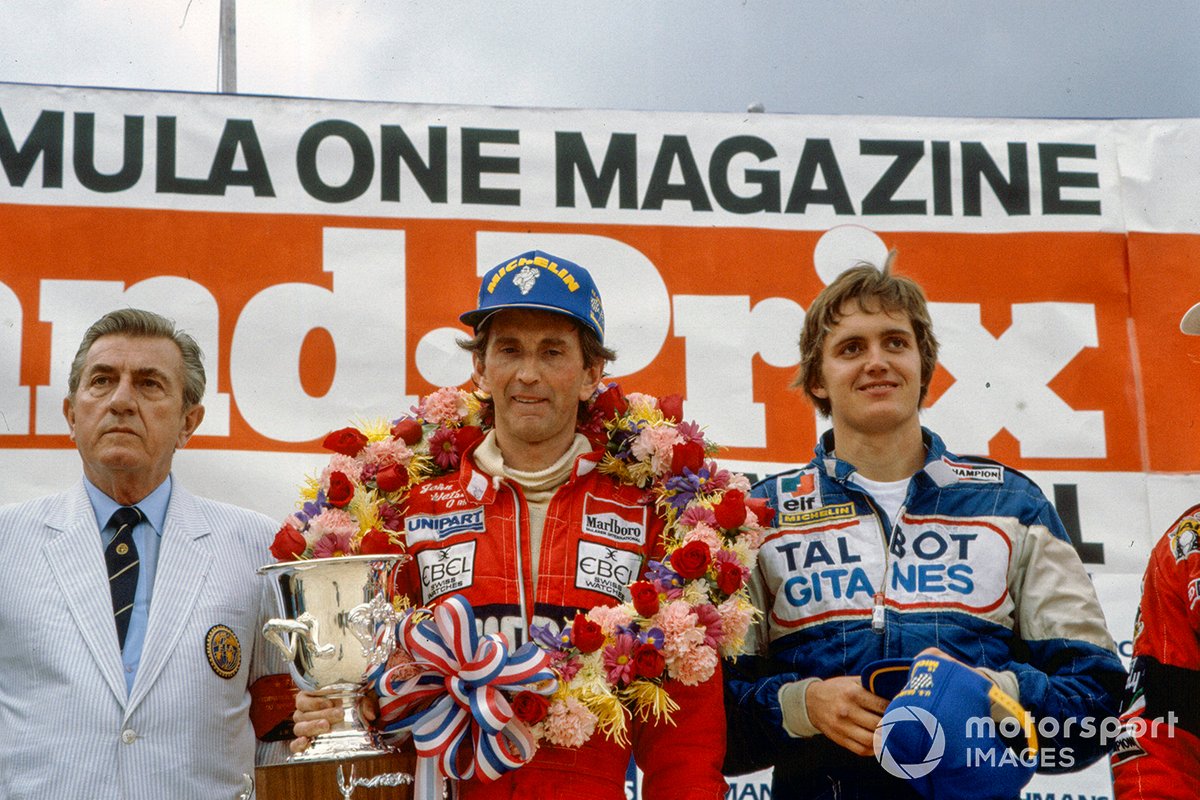 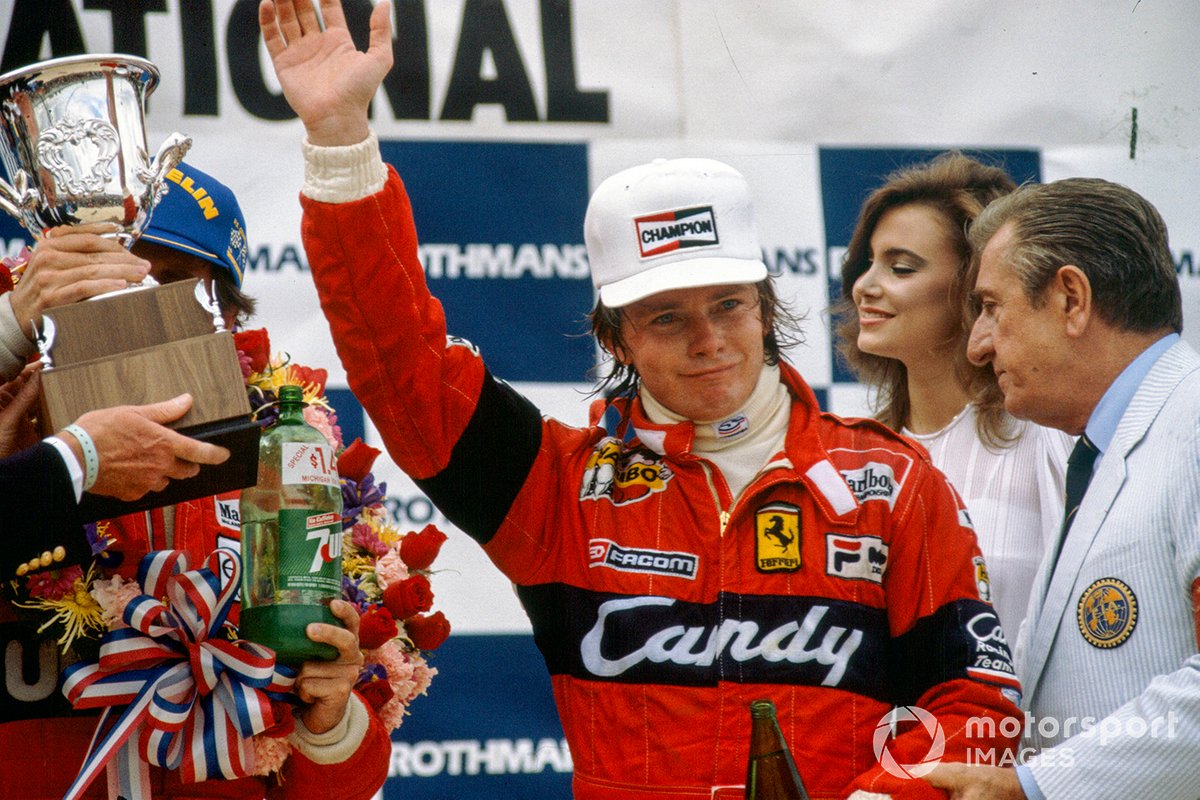 Watson won the race by 15.726s over Cheever, his fourth career F1 win, and was humble in victory: “I owe my success to a good car and the right tyres, which were chosen on the advice of Michelin.”

Pironi finished third – over a minute in arrears – with the limping Rosberg the only other unlapped car in fourth. His Williams teammate Derek Daly finished fifth (taking the flag in front of Rosberg, but the positions were reversed on aggregate), ahead of Jacques Laffite in the second Talbot-branded Ligier. Laffite had actually worked his way up to third place at one point, despite damaging his front wing against Pironi’s car, but his Matra engine lost power in the closing stages and he was forced to tour around.

Only 11 cars were classified, with Prost crossing the line in 12th but had spent too long in the pits having his ECU problem addressed. Although eight laps down, he did set the new track’s fastest lap, however.

The FIA has announced that it will relax Formula 1’s COVID-19 protocols for the 2023 season, including a requirement for those in the paddock to be vaccinated.