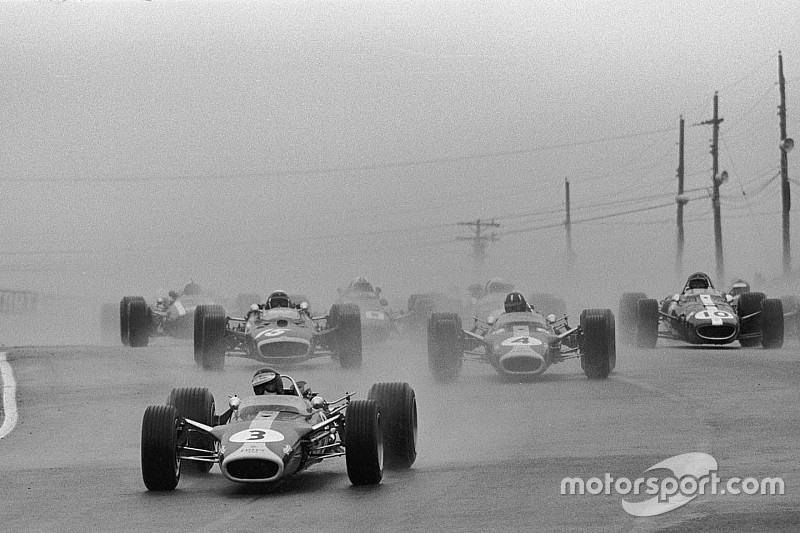 The first edition of the Canadian Grand Prix was held on this day, August 27, back in 1967. Sir Jack Brabham, driving one of his cars powered by a Repco engine, captured victory.

For most Canadian racing fans, the best way to celebrate the country’s Centenary in 1967 was to stage a round of the prestigious Formula 1 World Championship. A dedicated, hard working group of motorsport fans worked towards this goal and finally the FIA granted an August date.

The race was held at Mosport Park, a spectacular and scenic roller coaster road course located in southern Ontario, near Toronto. The 3.957km long track was made of ten fast, challenging and very different corners that required superior driving skills, bravery and total commitment from the drivers.

Lotus drivers Jim Clark and Graham Hill were fastest in qualifying in the new Ford-Cosworth DFV V8 powered 49s and they shared the front row of the grid with World Championship leader Denny Hulme, driving a Brabham BT24-Repco. Clark captured pole position with a time of 1m22.4.

Ferrari’s Chris Amon was on the second row alongside Dan Gurney's Eagle. Jack Brabham's Brabham-Repco and Jochen Rindt’s Cooper-Maserati made up the third row.

It was raining when the race scheduled for 90-lap, 356km began. Jim Clark jumped into the lead with Hulme in hot pursuit. On lap four, Hulme powered into first place while Brabham moved ahead of Hill to take third.

New Zealand’s Bruce McLaren's car (a BRM-engined McLaren) was performing well despite the rain and he was up to fifth when he had a spin but he then fought back and by lap 13 was able to take third place from Jack Brabham.

On lap 22, the flying McLaren passed Clark for second place. The track began to dry and McLaren's car was not best suited to the ever changing conditions. Slowly, Clark and Brabham regain ground on McLaren and passed him. Hulme was still leading the race, but Clark caught him and took the lead on lap 58.

However, rain started again. Clark remained into the lead until lap 68 when his engine cut out because water found its way into the ignition system of the Ford V8.

Jack Brabham overtook his teammate Denny Hulme on that same lap, and so the Brabham cars ran in formation to the finish. Dan Gurney crossed the line in third place, one lap down. Graham Hill, Mike Spence (BRM) and Chris Amon completed the point-scoring top 6 finishers.

Rosberg: Mercedes "seriously off the pace" before qualifying