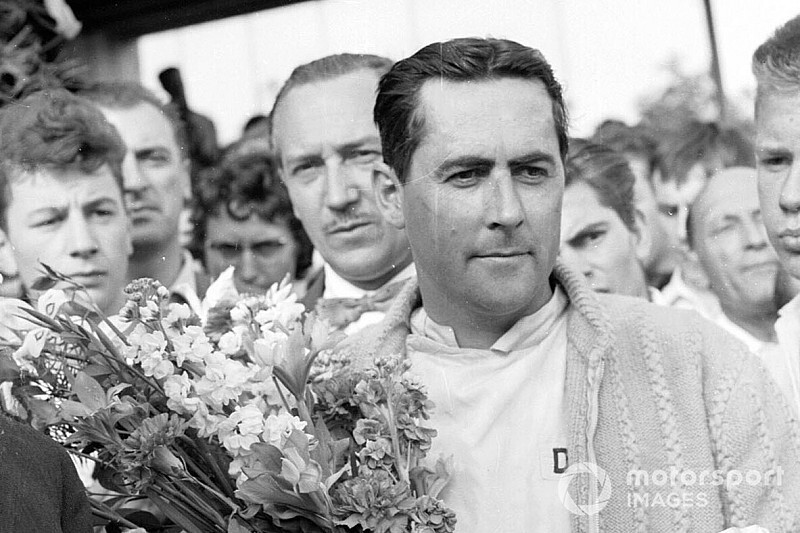 Sir Jack Brabham, who would have turned 94 this week, has earned a unique place in Formula 1 history. This is his story.

Sir Jack Brabham will surely remain the only Formula 1 driver in history to win the World Championship in a car bearing his own name. Although known for his aggressive and vigorous driving style, that belied a deep mechanical understanding that made his machines some of the most sturdy and trustworthy in an era when open-wheel racecars were, as a whole, frighteningly fragile.

Brabham’s interest in engineering first became vocational when he served as a “fitter” in the Royal Australian Air Force, but after getting discharged following the end of World War II, he became interested in speedcars (Australian term for midgets) and won five national and regional championships in them 1948-’51. After turning his attention to road racing using Coopers, he continued to display great ability, and moved to the UK to pursue a career in the sport. There he stayed loyal to the Cooper marque, forming a friendship with founder Charles Cooper and his son John while campaigning the marque’s radical rear-engined cars in both Formula 2 and Formula 1.

While clinching the 1958 Autocar F2 title, Jack’s previously haphazard F1 career also started gaining momentum, and he scored several top 10 finishes that year. Then came the big turning point – Cooper acquired the 2.5-liter Climax engines for 1959, and two wins and three other podium finishes in an eight-race campaign were enough to earn Brabham the World Championship. He doubled up in 1960 after a stunningly dominant five-in-a-row win sequence, leading soon-to-be team owner rival Bruce McLaren in a Cooper 1-2 in the Constructors’ Championship. 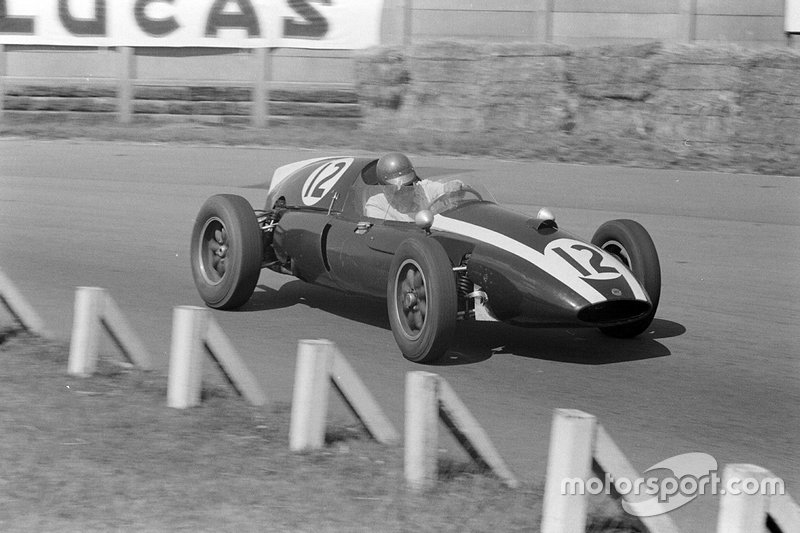 Jack Brabham drives his Cooper T51-Climax to victory in the 1959 British Grand Prix at Aintree.

Then Cooper, having started the rear-engined trend, was left behind by the switch to 1.5-liter engines in 1961, and Brabham suffered a desultory year in terms of F1 results. However, on the plus side, he had become a businessman – and Indy car driver! Along with designer and engineer Ron Tauranac, Brabham had founded Motor Racing Developments, a company which started out building Formula Juniors but with a long-term plan for graduating to F1.

But also that year, having developed a friendship with eventual two-time Indy 500 winner Rodger Ward, Brabham became the man who initiated the rear-engined revolution at the Brickyard. Armed with a Cooper, he entered the 45th Indianapolis 500 and caused mild shock by outperforming many of the more powerful front-engined roadsters, qualifying 13th and finishing ninth.

Armed with the Brabham BT3, the two-time World Champion scored six points in the 1962 F1 World Championship, and the following year, he expanded the squad to a two-car operation and hired the brilliant Dan Gurney as his teammate. Between them, they scored 30 points, which elevated the team to third in the Constructors’ Championship – a remarkable accomplishment for a squad in its sophomore season. 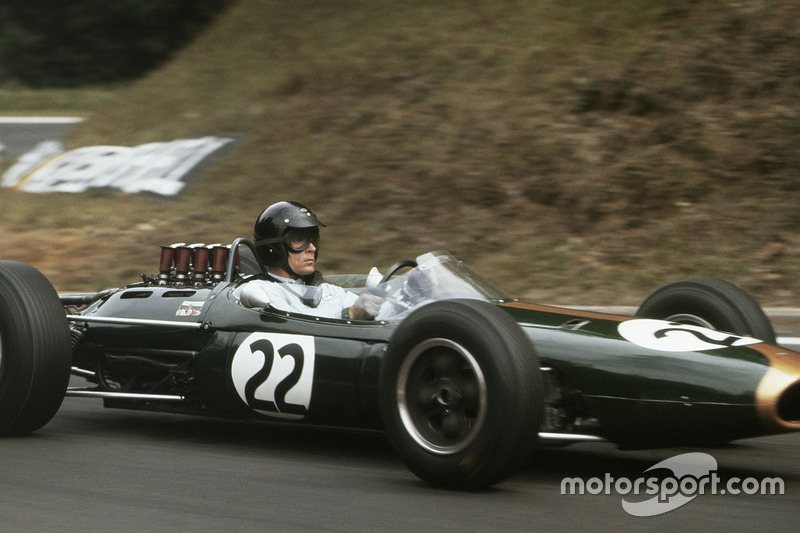 The points haul was the same in ’64, but Gurney’s victories in Rouen and Mexico City provided the breakthrough and encouragement the increasingly impressive team needed. In ’65, they all trod water as the Jimmy Clark/ Lotus 33 combo was all-but unbeatable, but for ’66, the Brabham team was ready for the new 3-liter regulations, thanks largely to Jack’s far-sightedness.

Figuring rival teams would struggle for reliability in the first year of the new rules, Brabham had commissioned the Australian Repco company to design an engine that was not too overambitious but very dependable, using an Oldsmobile unit as the template. Brabham’s prediction was accurate: Ferrari struggled all season, Lotus simply didn’t have a suitable engine ready, and so Jack scored a dominant third World Championship. 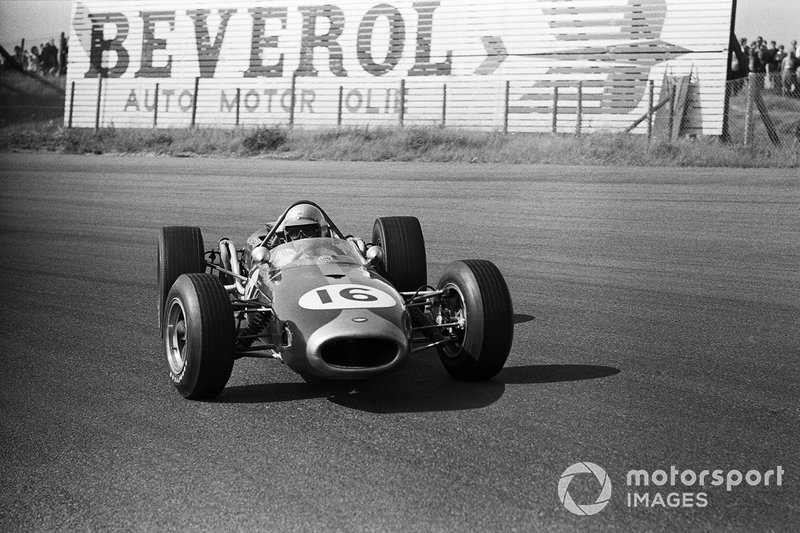 Jack Brabham's third World Championship came in 1966, at the wheel of his own Repco V8-powered BT19. Here he oversteers around Zandvoort on his way to the third of four wins that year.

The following year, anticipating the strength of the Ford-funded Cosworth engine in the Lotus 49s, Jack became more ambitious with his own car and was constantly trying new, developmental parts, which occasionally let him down. Teammate Hulme, by contrast, stuck with more proven mechanicals, fewer “trick bits,” and the resultant superior reliability allowed him to edge his employer for the ’67 drivers’ title. Between them, they scored a 1-2 in the Drivers’ Championship, ensuring a second straight Constructors’ crown. 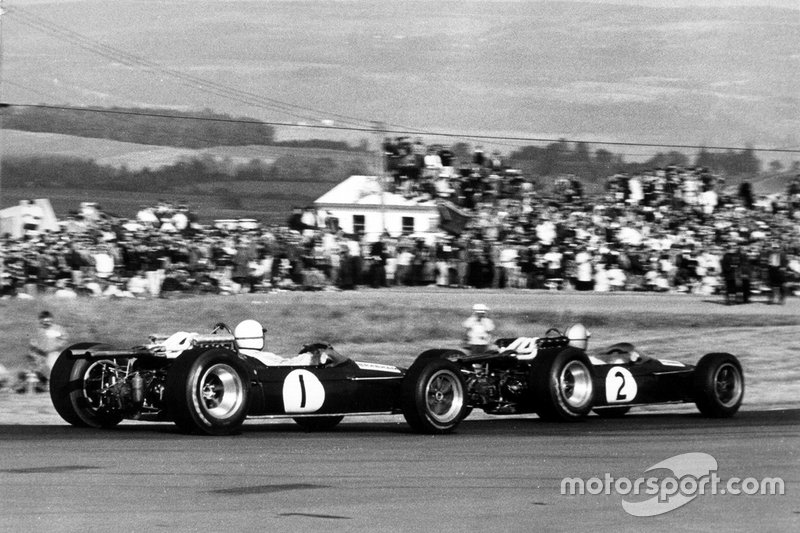 Denny Hulme leads teammate Brabham at Kyalami in ’67. Superior reliability would see the Kiwi prevail over the boss in the final points standings.

Hulme then left to join Bruce McLaren’s eponymous team for 1968 and while Brabham was able to replace him with another driver of championship potential, Jochen Rindt, the pair of them were usually wasting their time as Repco’s reliability took a sharp dive. In a season that had claimed the lives of Jimmy Clark, Mike Spence and Jo Schlesser, suddenly racing, from a 42-year-old Brabham’s perspective – or perhaps more importantly, the perspective of his nearest and dearest – looked all risk and no reward. The business side of things, by contrast looked safe and peachy, as his marque was producing the Formula 2 cars of choice at this time.

However, Jack had always put his team’s needs ahead of his own and so when Rindt was lured to Lotus for ’69, the ‘old’ Aussie battler was left concluding that the most suitable candidate to lead his newly Cosworth-powered team’s driving force was himself.

He was right, too, for although he injured his foot in a testing accident, forcing him to miss three midseason races, he topped and tailed his year with pole positions, and also landed a couple of podiums. Meanwhile, his replacement for Rindt, the similarly precocious Jacky Ickx, scored two wins for the marque. Now it seemed Jack could hang up his helmet knowing he had an ace who would continue doing justice to his cars’ potential. 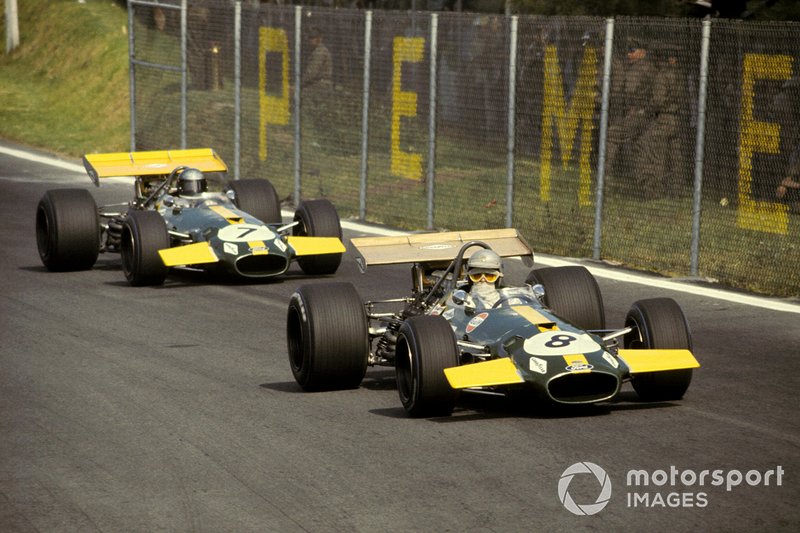 Brabham (8) beat his bright prodigy Jacky Ickx to pole at Mexico in ’69, but ceded best to him in the race. Yet both were defeated by Hulme, driving for another great Antipodean driver/constructor, Bruce McLaren.

Not just yet. Ickx departed to Ferrari for 1970 and so Brabham, soon to turn 44, headed into the fray once more – and won the season-opener in South Africa! He then came within a single corner of winning the Monaco Grand Prix (error while under pressure from Rindt) and should have won the British GP but ran out of fuel on the final run to the flag. Elsewhere, it was unreliability that let him him down, otherwise he might have been a genuine championship threat to Rindt and Ickx, his former employees who dueled for the crown.

But those familial pressures to quit while ahead were given extra weight by the tragic fate of rivals. McLaren, Jack’s former teammate, fellow driver/engineer and friend, was killed while testing a Can-Am car, Piers Courage died in a crash during the Dutch Grand Prix, and Rindt perished at Monza, winning the World Championship posthumously.

And so, not without some rueful backward glances, Jack Brabham retired at the end of the 1970 season with 14 Grand Prix wins, 13 pole positions and three World Championships to his name. 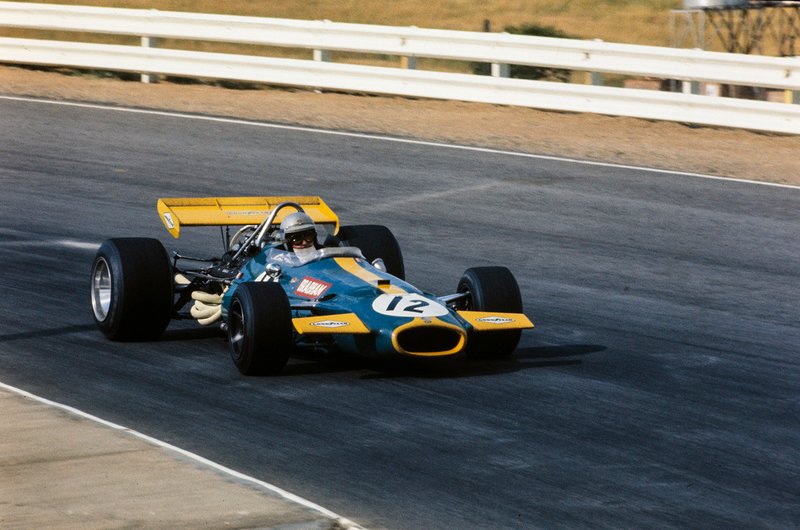 The final GP win for "Black Jack" came at Kyalami in 1970 in a BT33. Only a jumble of misfortunes prevented him making a strong run for the title, at the age of 44!

Brabham sold his share of the company to Tauranac who then partnered with Bernie Ecclestone, and in 1979 was awarded an honorary knighthood in England to make him Sir Jack Brabham. He would eventually see his sons Geoff, Gary and David all display great promise in open-wheel racing, before finding their most notable successes in sports cars.

When Brabham died in May 2014, Dan Gurney wrote: “A motor racing giant has left our planet whose combined achievements as F1 World Championship driver and car constructor in all likelihood will never be equaled. Dark-haired "Black Jack" was a fierce competitor, an outstanding engineer, a tiger of a driver, an excellent politician and a hands-on creator and visionary…

“I followed the trail he had blazed by trying to build, race and win with my own F1 cars. I have been told that only three men in the history of auto-racing have managed to do that. Bruce McLaren and I won races, but Sir Jack Brabham won World Championships. He will be forever in a class all by himself.

“I will miss you Jack! You showed the way!”