Join us as we delve into the latest technical developments from the Italian Grand Prix at Monza, courtesy of Giorgio Piola and Sutton Images. 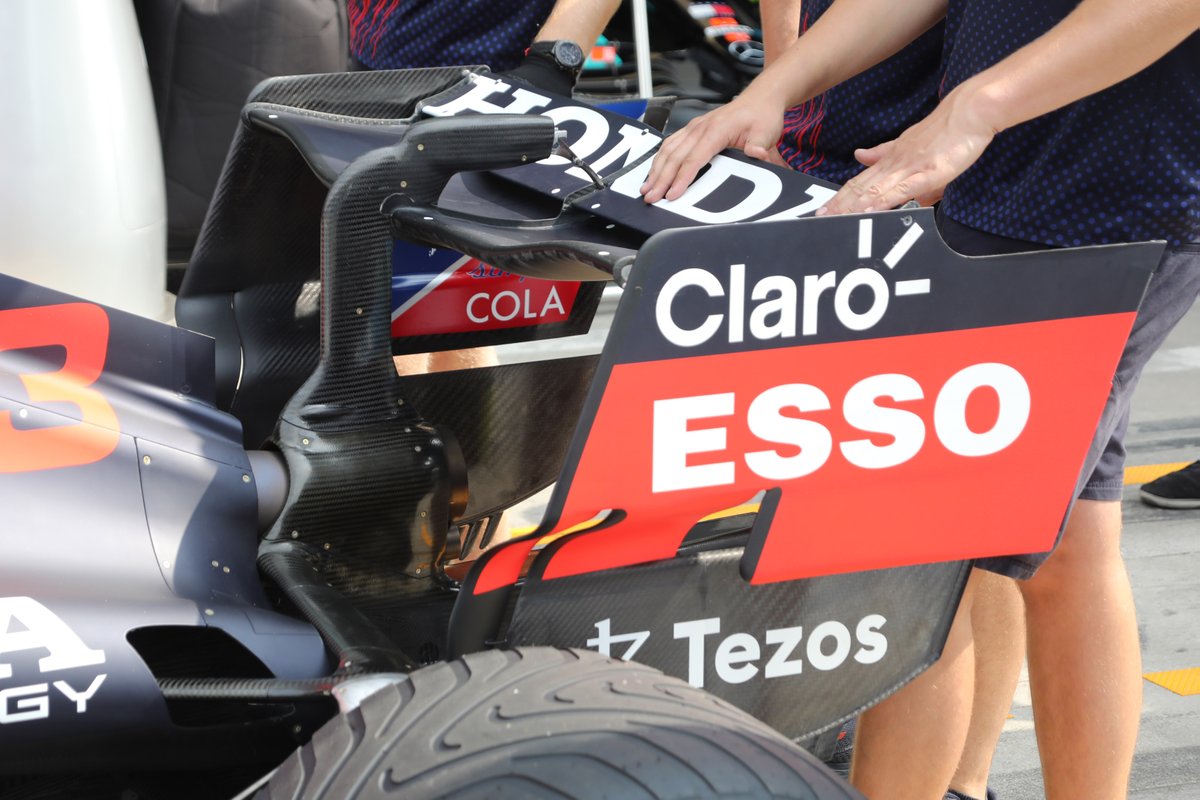 1/22
Red Bull's rear wing arrangement takes things to the extreme for Monza with the spoon-shaped wing mounted extremely high on the endplate as the team look to reduce drag as much as possible, with the central section poised to do most of the work in terms of creating downforce. 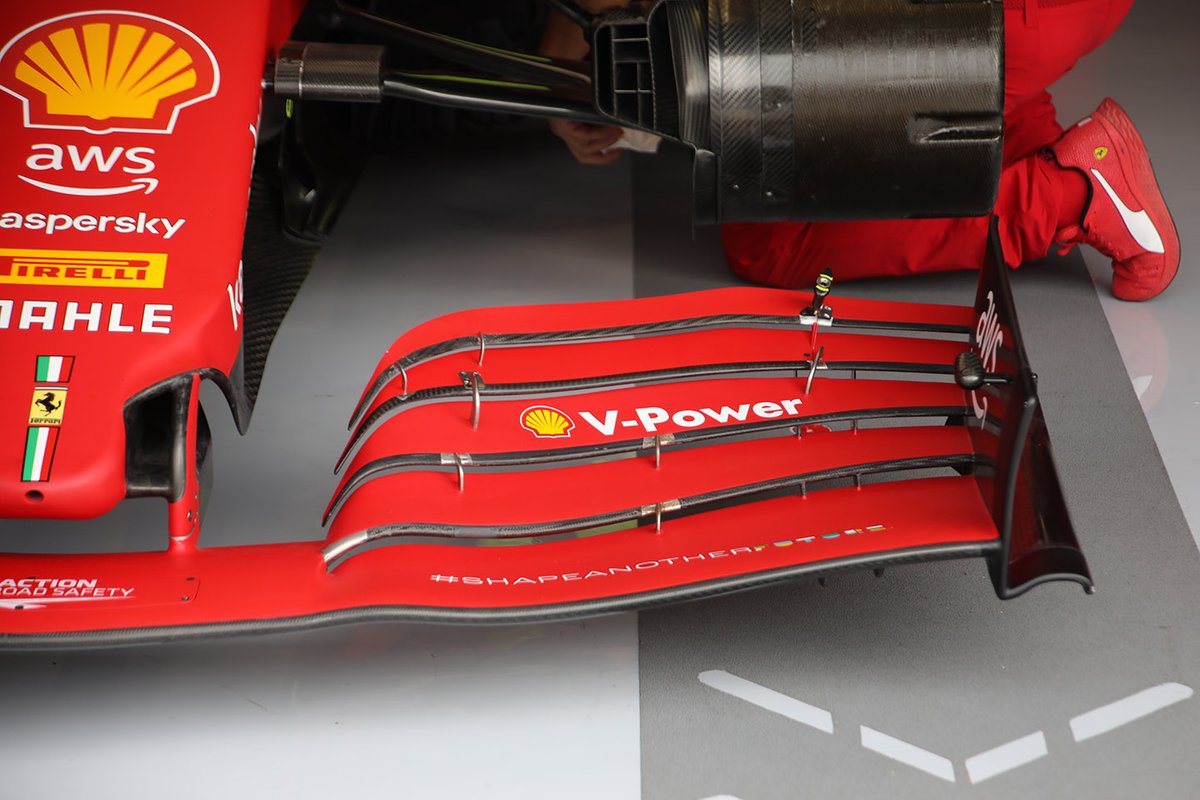 2/22
Ferrari's front wing for Monza is not only a trimmed upper flap, like most of their rivals, it also has a revised second flap too. Also note the cover over the front brake drum which is used to optimise the temperature of the brakes prior to the tyres being fitted. 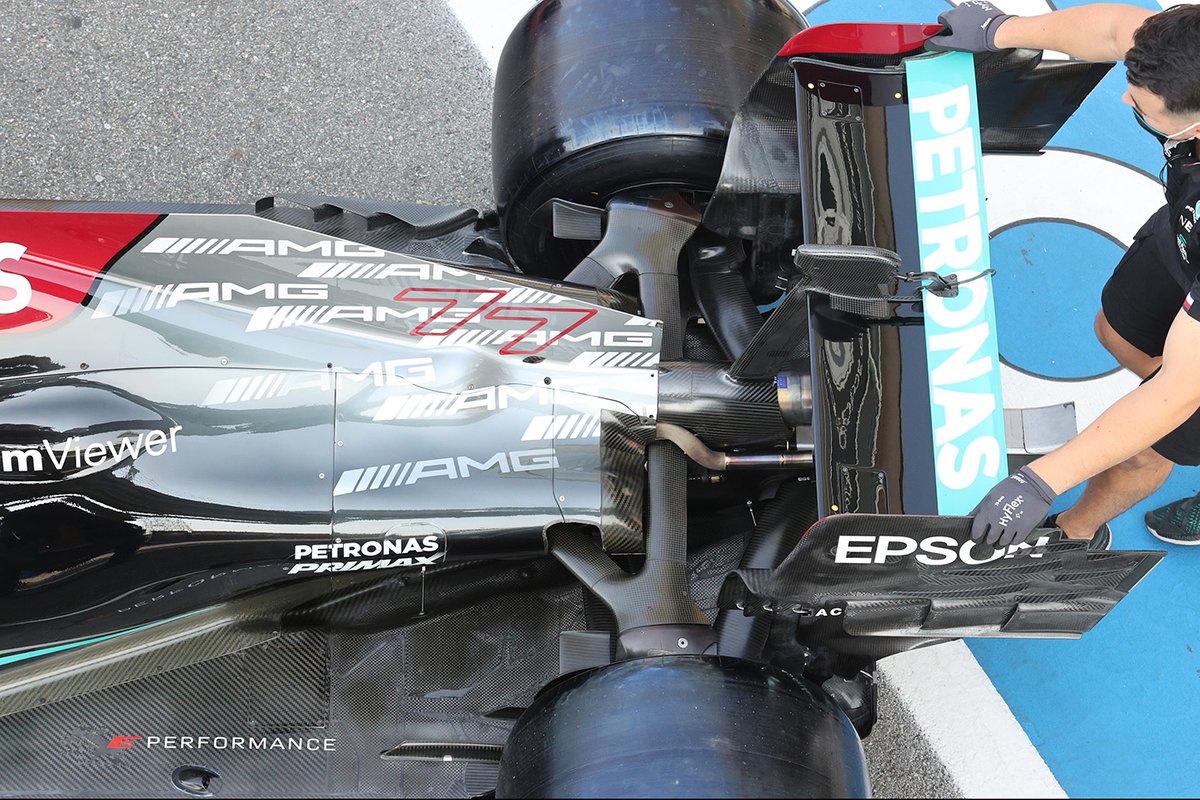 3/22
A top down overview of the Mercedes W12 rear end and their lower downforce rear wing with a single mounting pillar in the centre. Also note how the floor has been scalloped out into the coke bottle region and how far back the rear suspension arm is mounted on the crash structure. 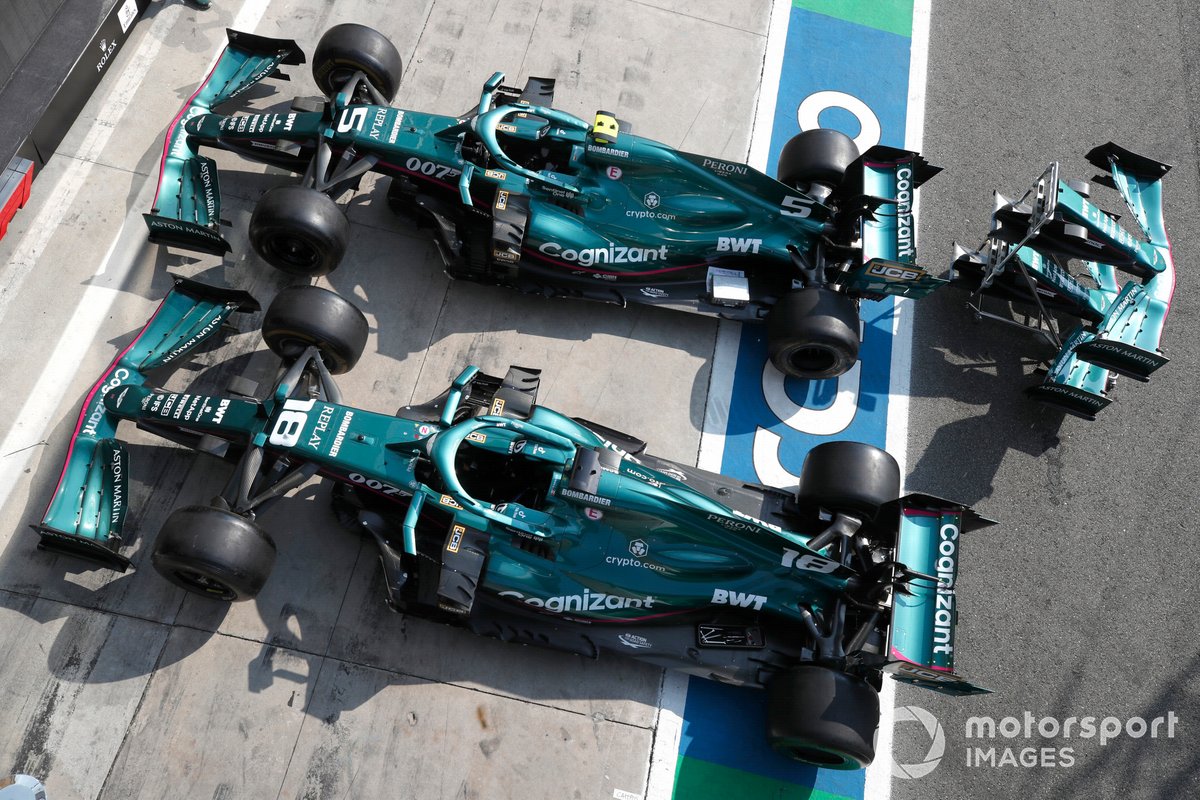 4/22
Top down overview of the Aston Martin AMR21's which have been extensively overhauled during the first half of the season as the team looked to overcome the issues that were created by the new regulations. 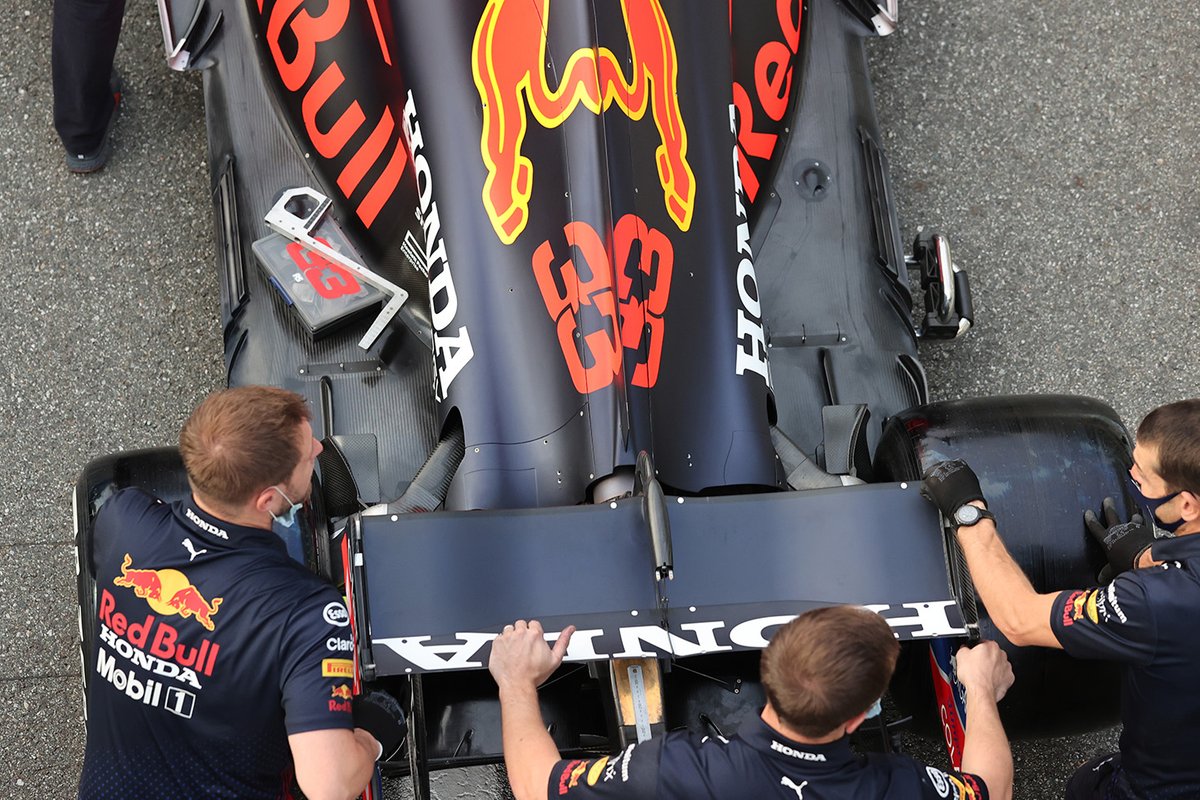 5/22
Top down overview of the Red Bull RB16B as it's pushed to scrutineering, note the teams treatment of the edge of the floor, with various solutions used to help redirect the airflow before the rear tyre. 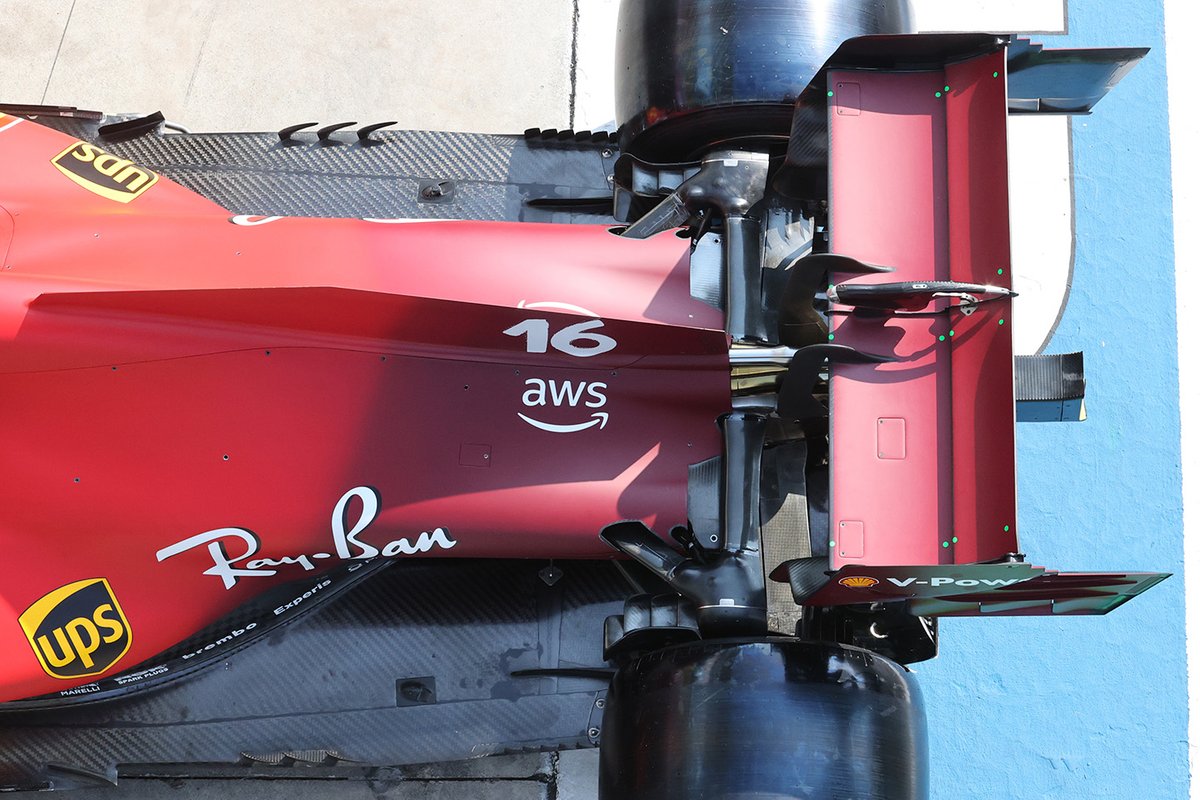 6/22
A top down overview of the Ferrari SF21's rear end which is outfitted with their lower downforce rear wing. Also note the treatment on the edge of their floor with a single outwardly angled strake near the cutout, three 'r' shaped fins midway along the cutout and a cluster of fins just ahead of the rear tyre. 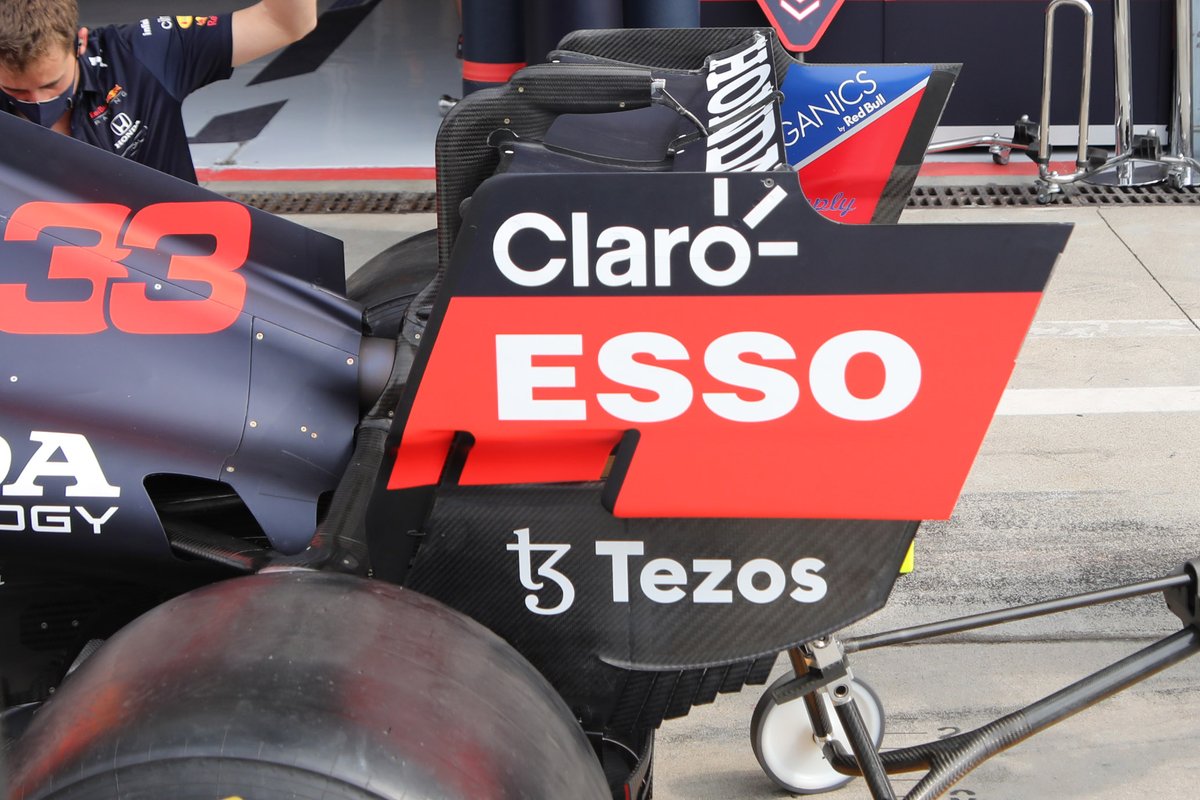 7/22
This shot from the side of the Red Bull RB16B's rear wing highlights two key details, firstly the upwash strakes and serrated upper rear cutout have been removed for Monza and secondly we can see just how little angle of attack the rear wing is set at, with the top flaps leading edge also following the curvature of the mainplane. 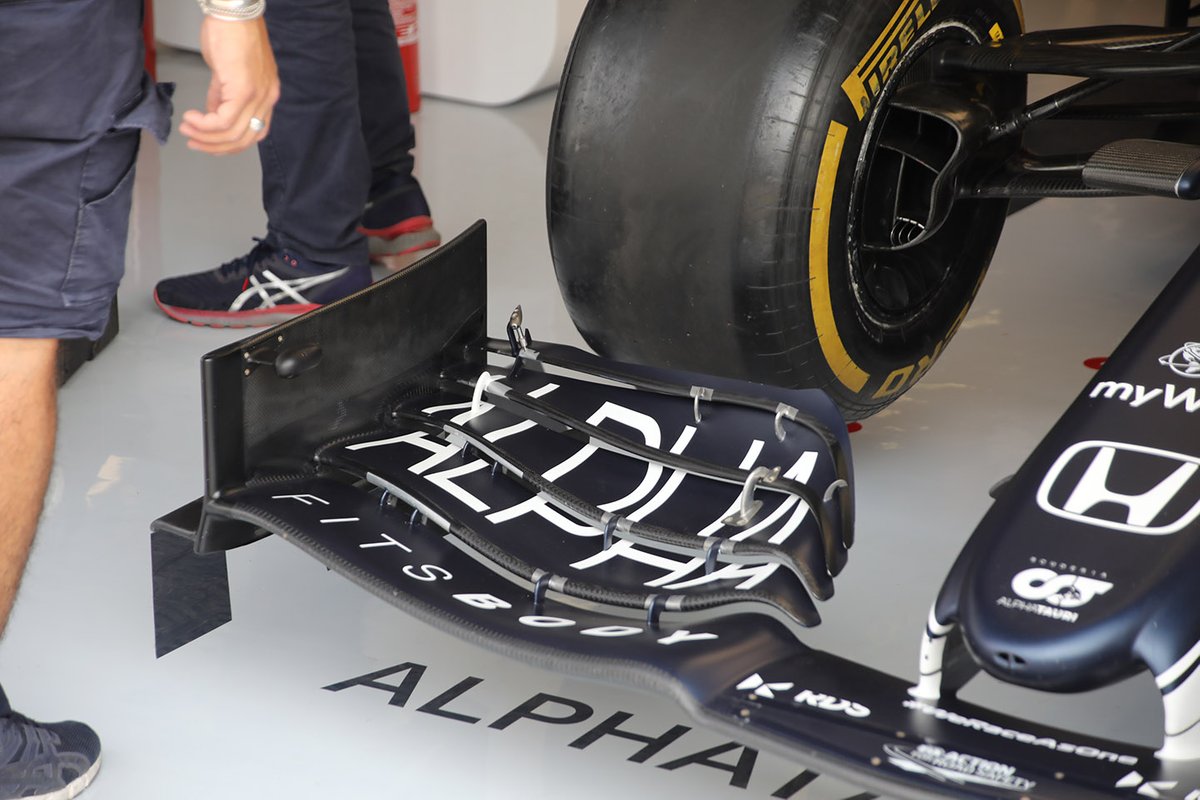 8/22
AlphaTauri have trimmed the trailing edge of their front wings top flap to help reduce downforce and balance the car front-to-rear given the smaller rear wing that will be deployed. 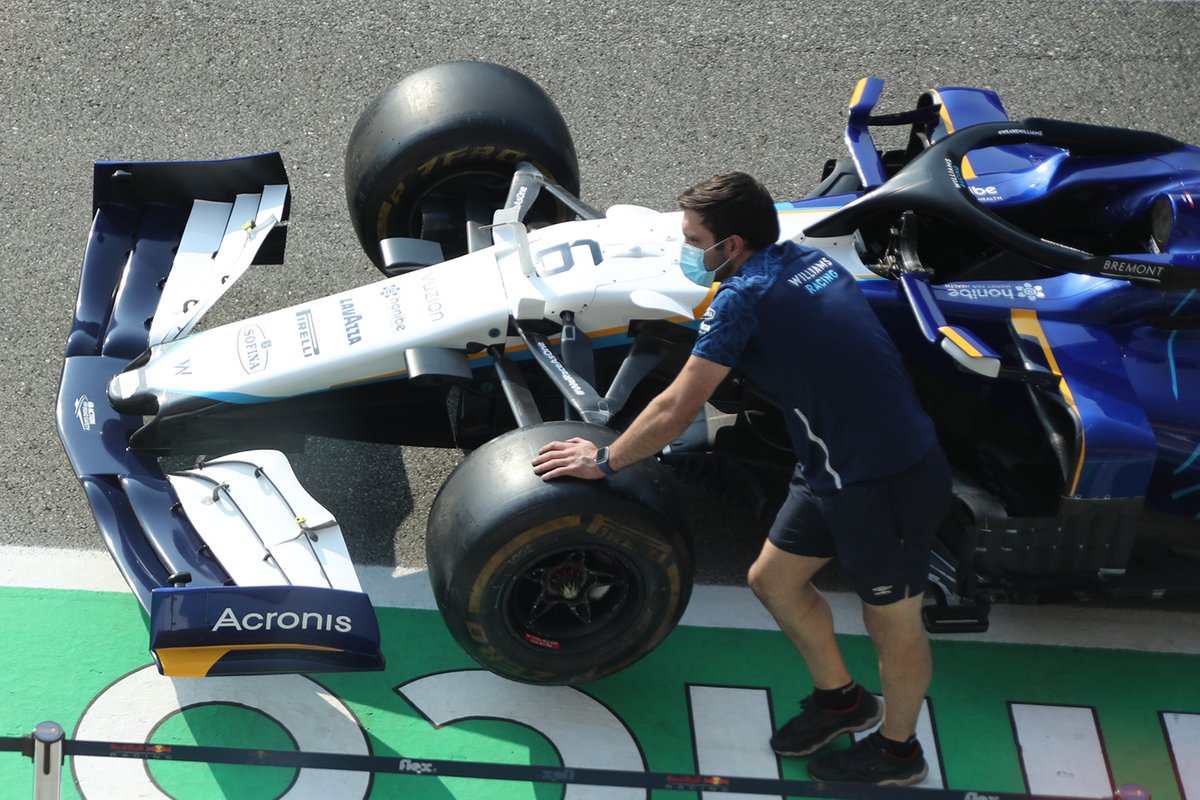 9/22
The Williams FW43B being pushed down the pitlane to scrutineering, note the curved trailing edge of the upper flap which has been modified to reduce downforce. 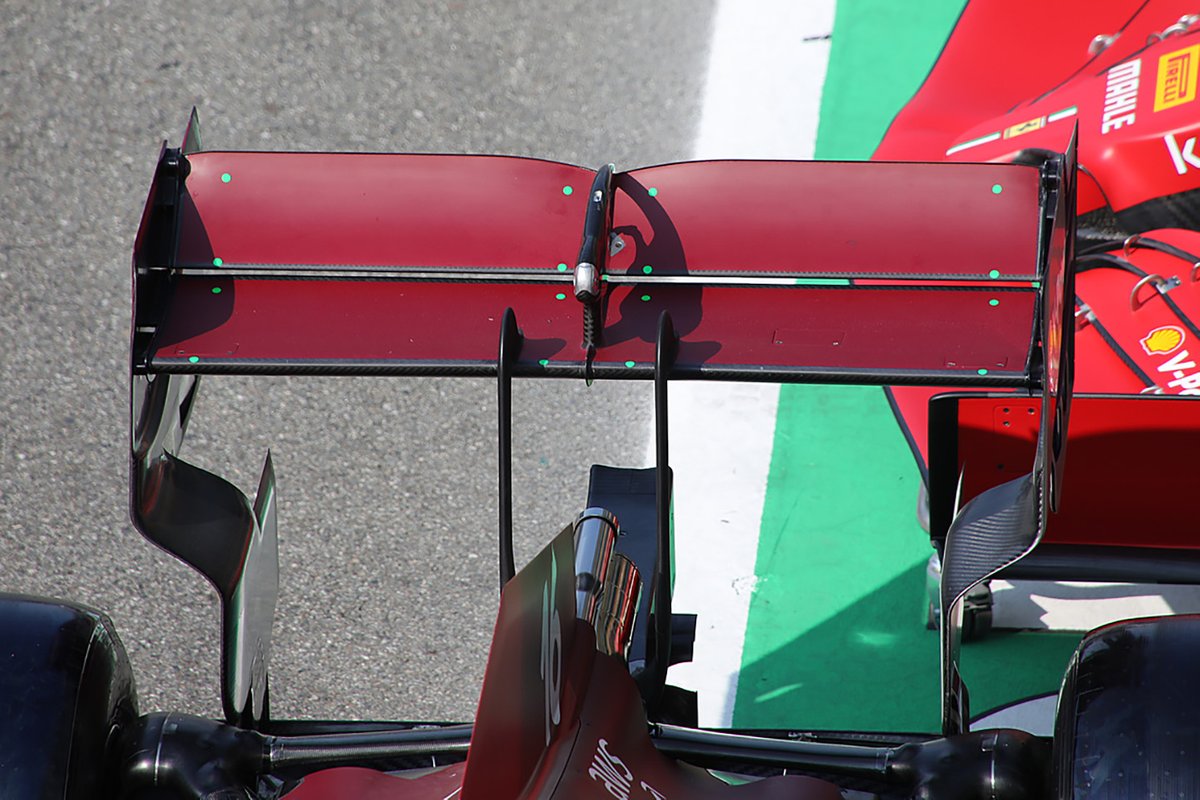 10/22
Ferrari's lower downforce rear wing which as you'll note has the dog-eared edge in the upper corner of the endplate to help alter the tip vortex. This is neither new or unique as most of the grid are now using the concept in one form or another. 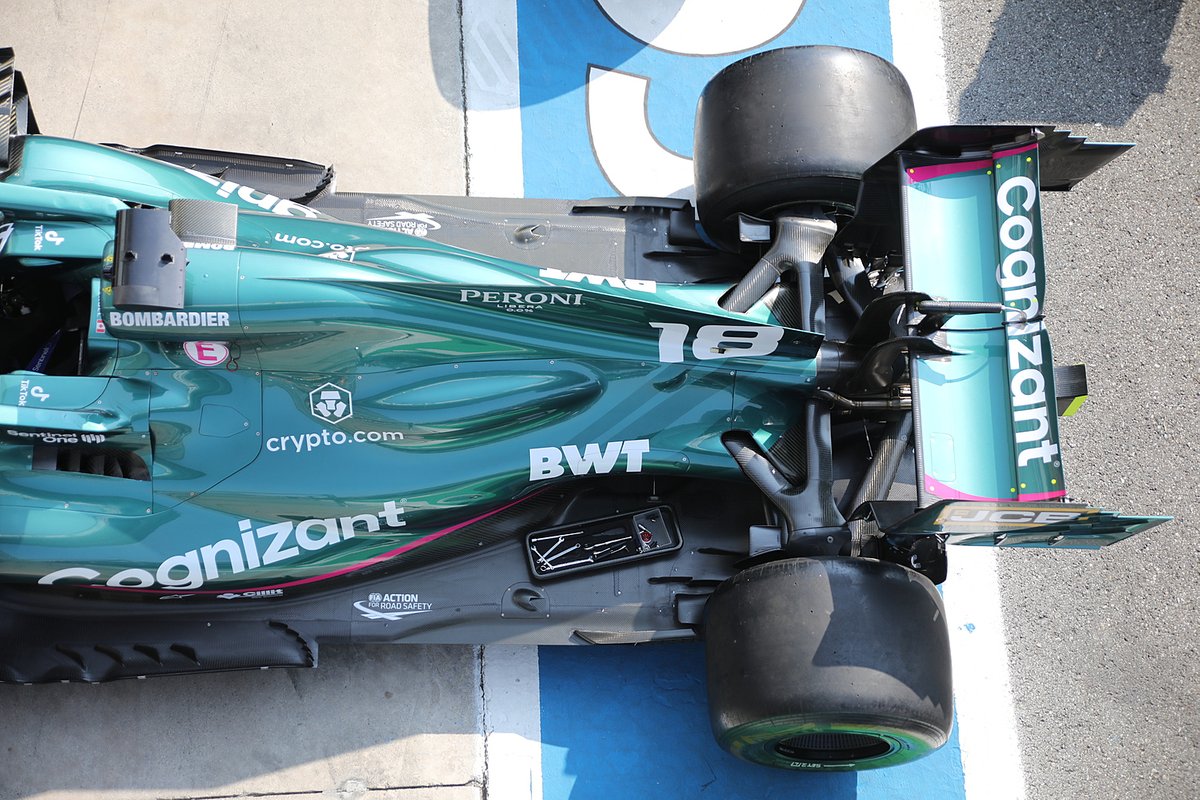 11/22
The extremely tightly wrapped rear end of the Aston Martin AMR21 which requires the two blisters on the engine cover to enclose the larger inlet plenums on the Mercedes power unit. 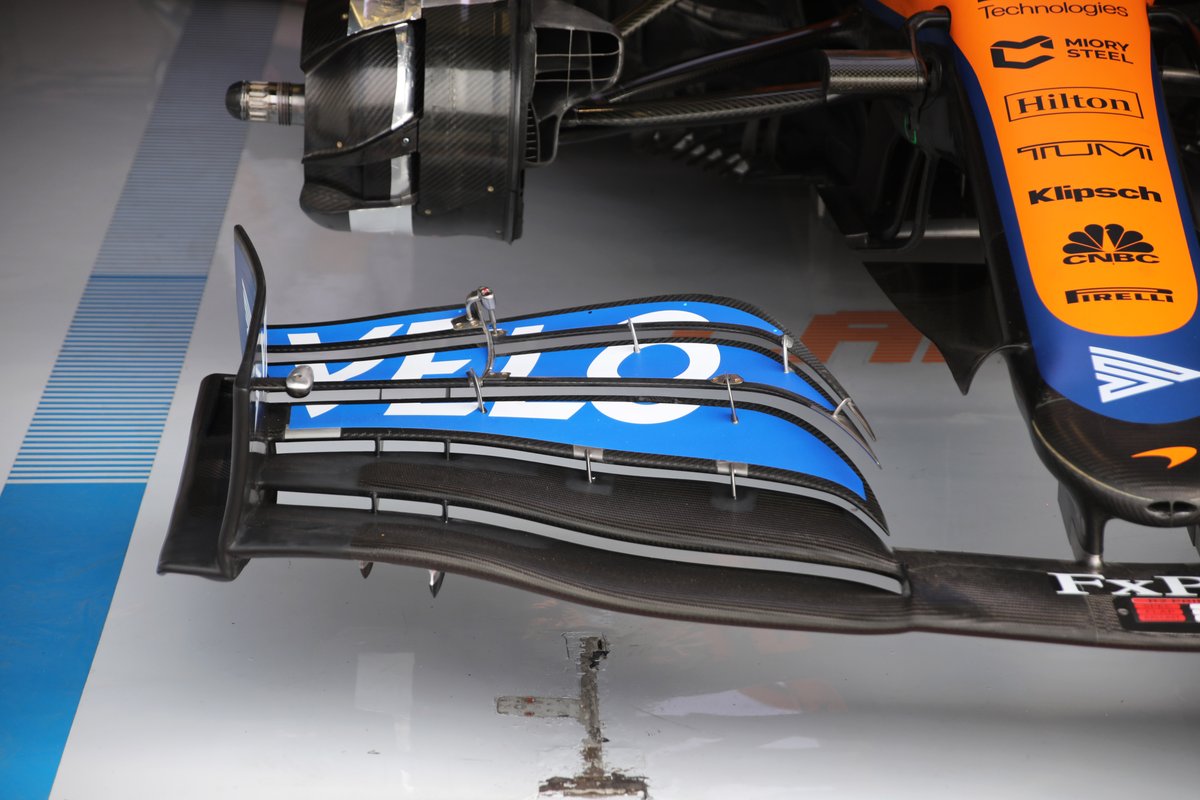 12/22
McLaren's front wing upper flap has been trimmed on the inboard section (right of the adjuster) to reduce downforce. 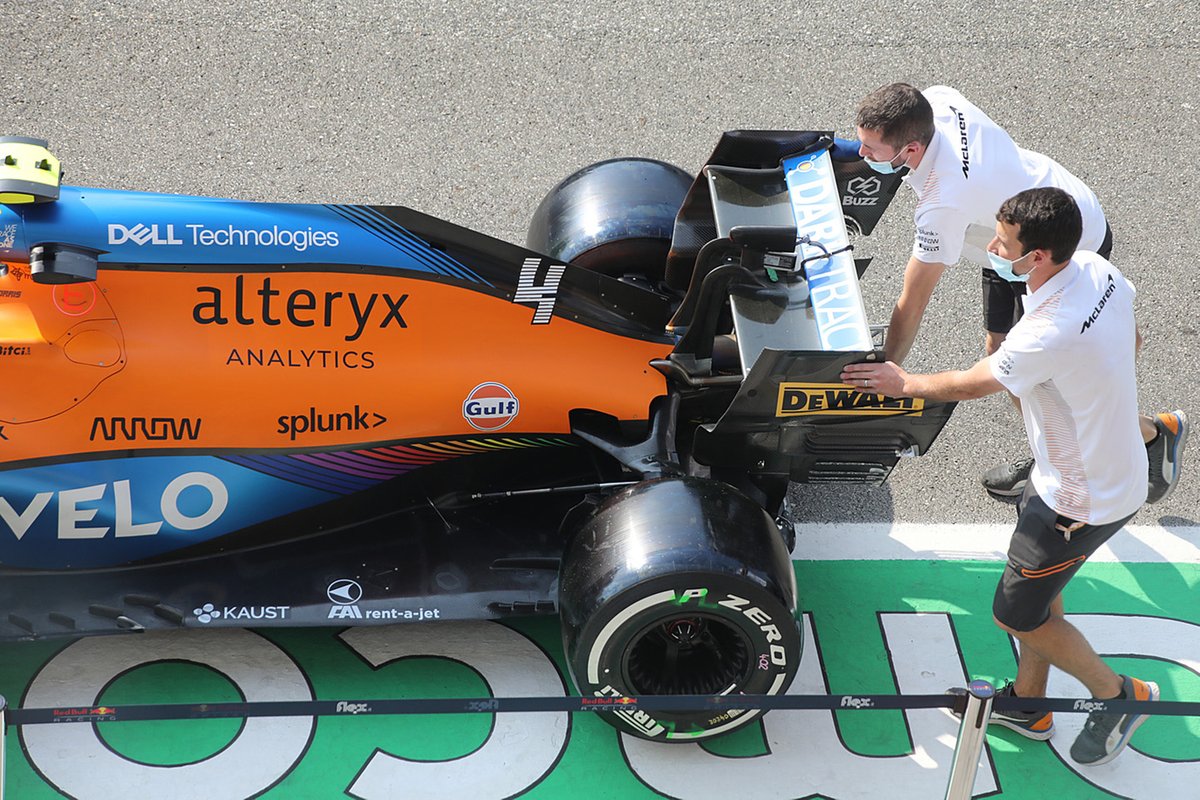 13/22
McLaren's low-downforce rear wing, which you'll note has the upper flap trimmed back and no Gurney tab applied. 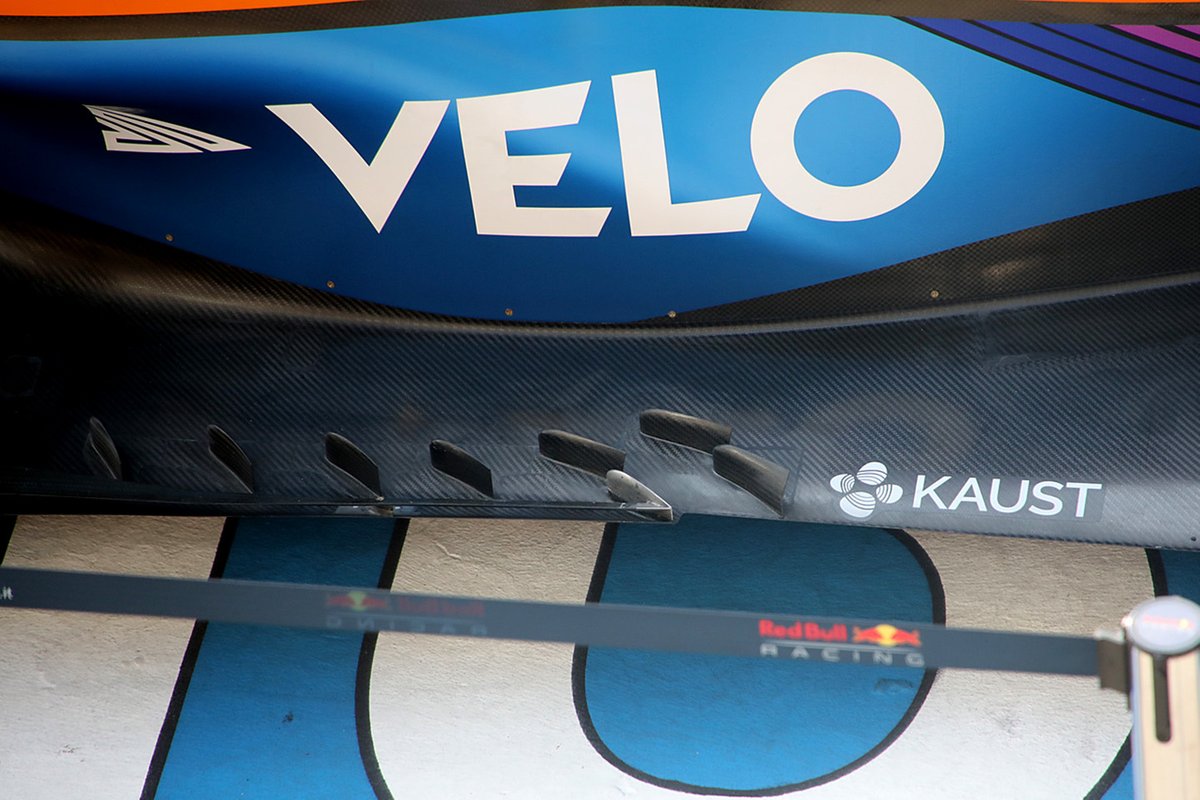 14/22
The forward section of the floor on the McLaren MCL35M with its numerous fins which are fanned out, in order that the airflow is directed as required. Also note the small Z-shaped cutout that the team uses, whereas others have taken much more floor away to achieve their objectives. 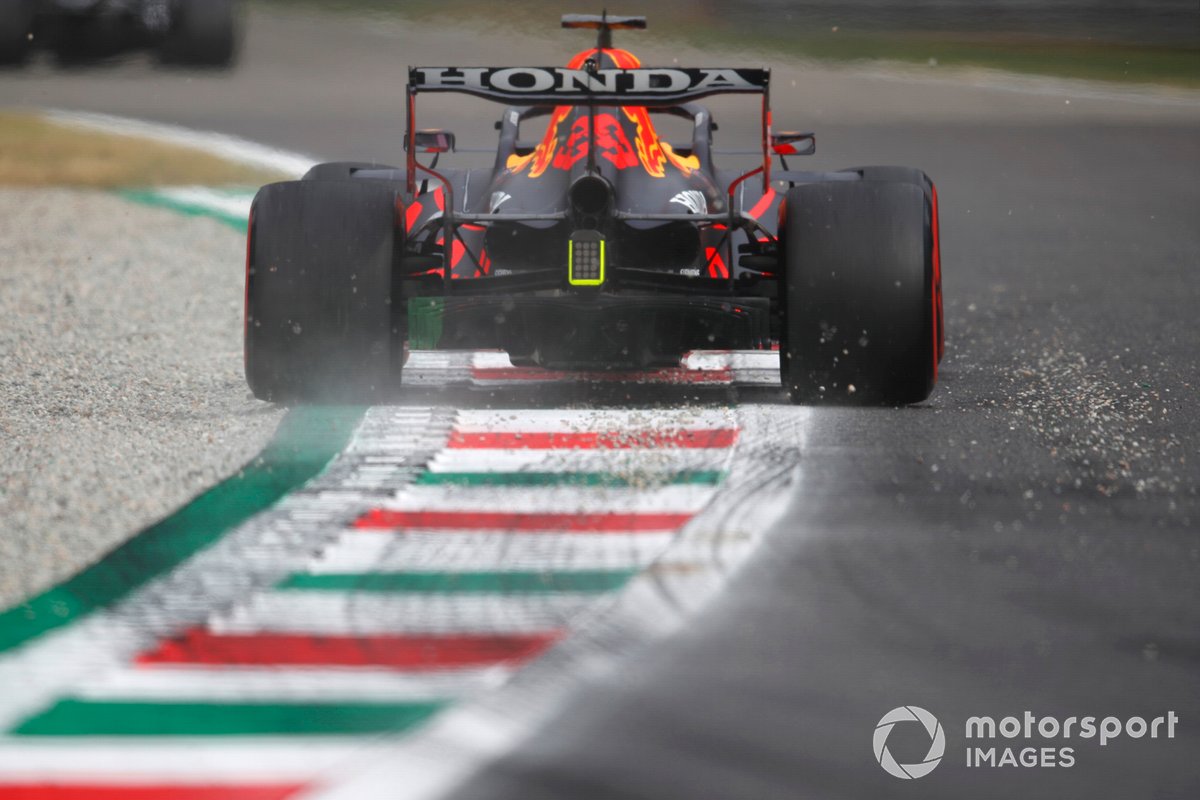 15/22
Flo-viz was painted on the outer corner of Max Verstappen's RB16B during FP1 as the team looked for confirmation that it was performing as expected. 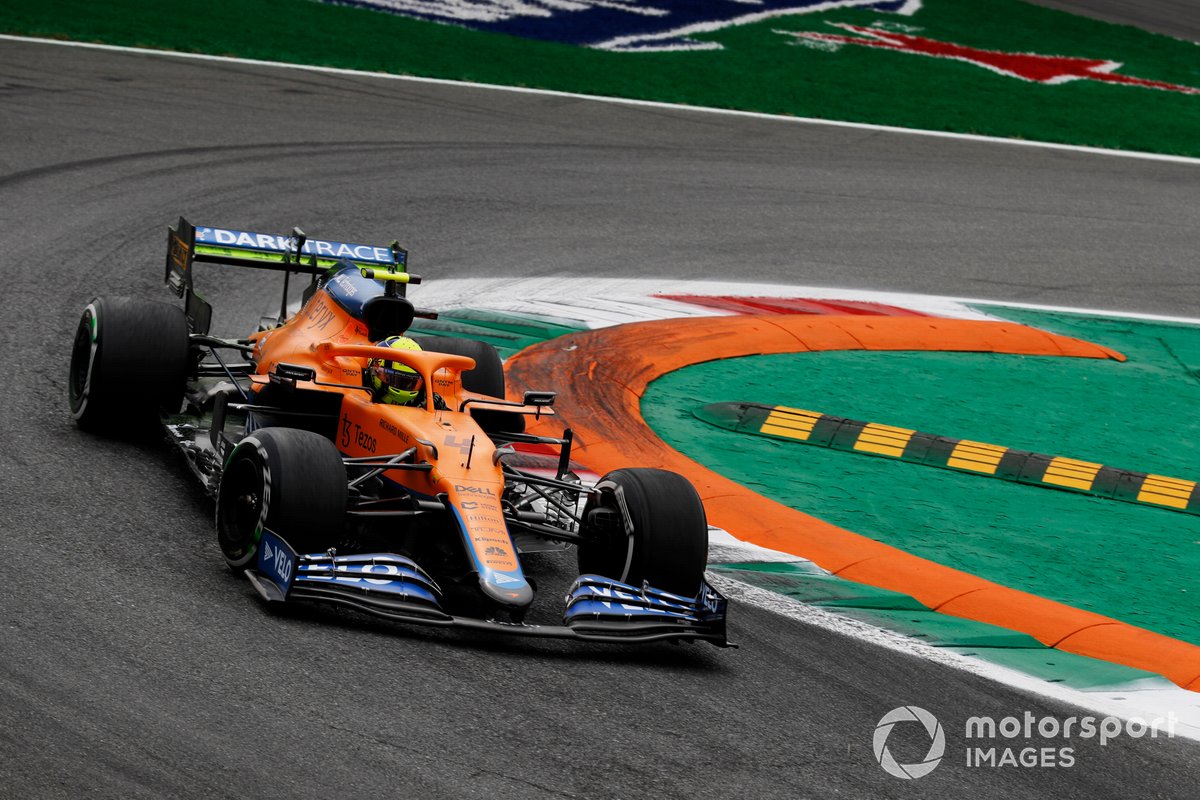 16/22
Flo-viz was also applied to the rear wing mainplane of Lando Norris' MCL35M as the team evaluated its low downforce set-up. 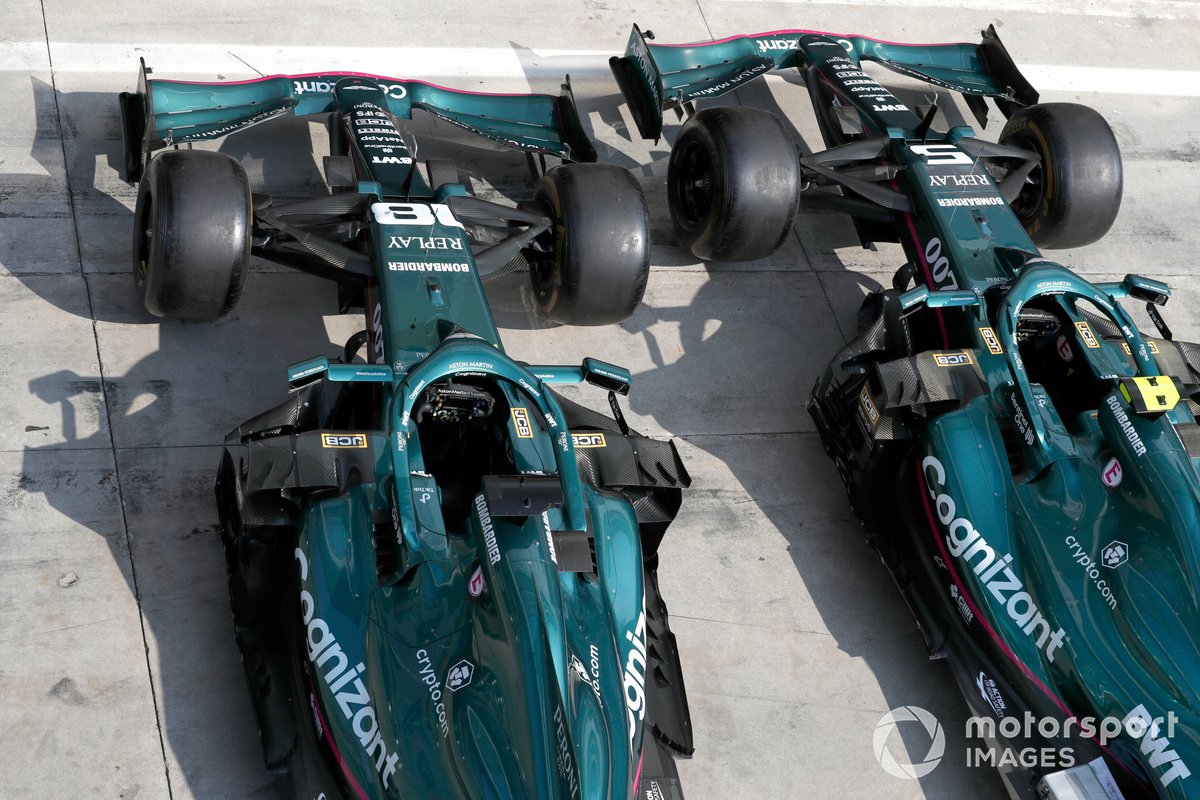 17/22
As we look down over the front of the Aston Martin AMR21's we can see that both cars are fitted with their lower downforce front wing, which was introduced at the Belgian GP and has a kink in the top flap just ahead of the front tyre. 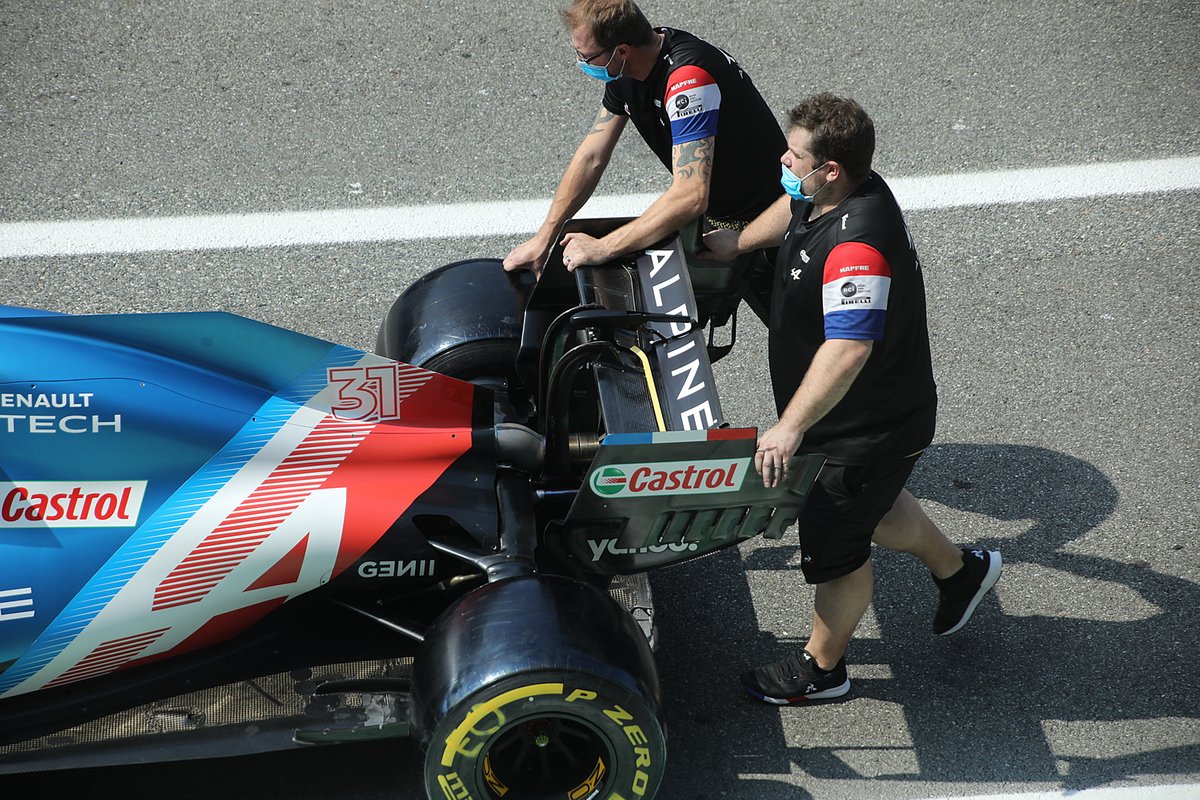 18/22
The Alpine A521 is pushed down the pitlane to scrutineering with its low-downforce rear wing installed. Note the Gurney trims are not installed yet but can be seen resting on top of the wing in case they are needed during the weekend. 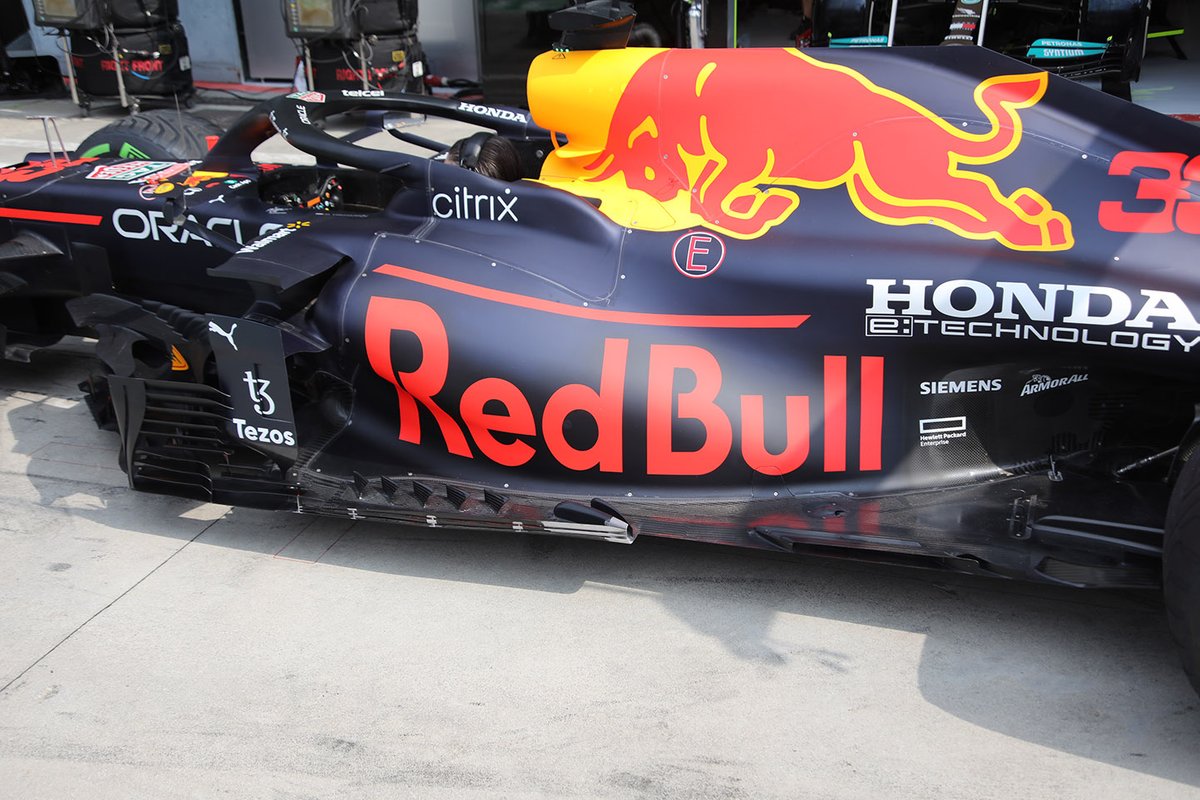 19/22
A nice view of the Red Bull RB16B's floor and the furniture on the edge of the floor. Note the twin strake arrangement near the cutout, this had previously only been the more dominant of the strakes until Belgium when it added an additional strake. 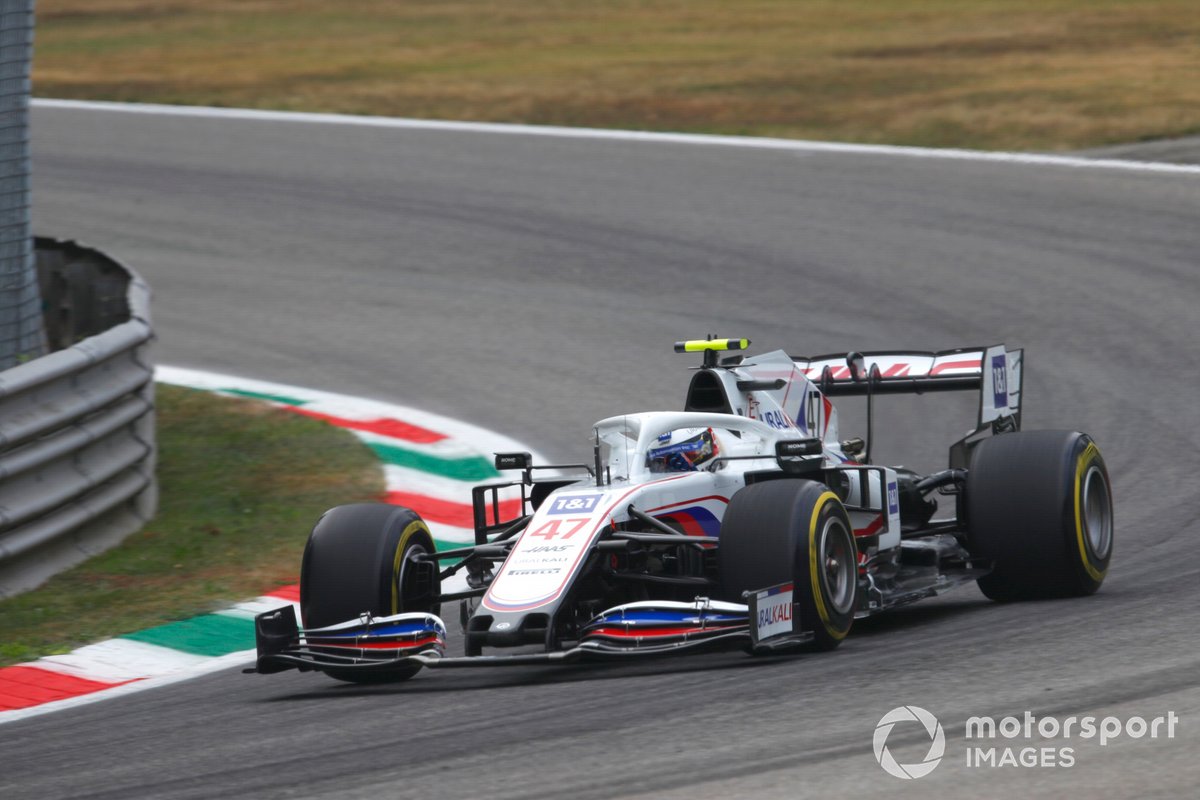 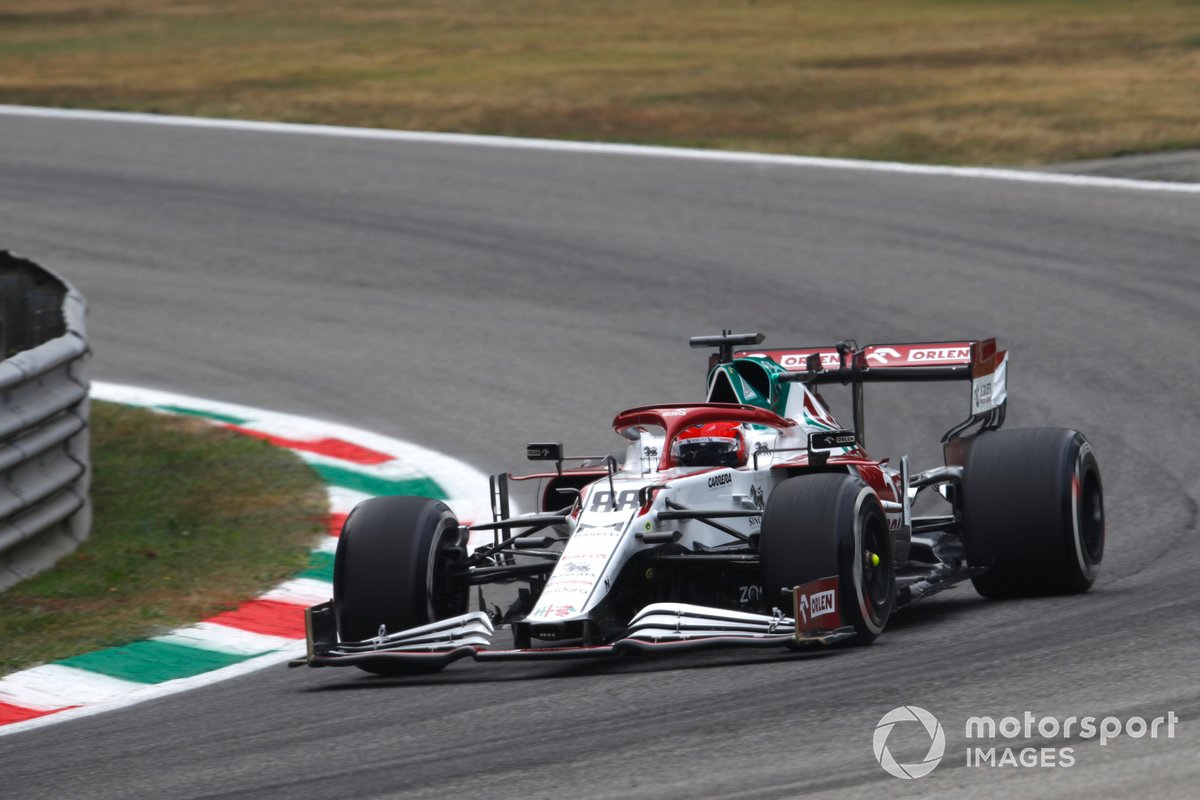 21/22
Alfa Romeo has a similar rear wing arrangement to last year with a large but sawn off pair of rear wing pillars used to compliment the smaller box region. 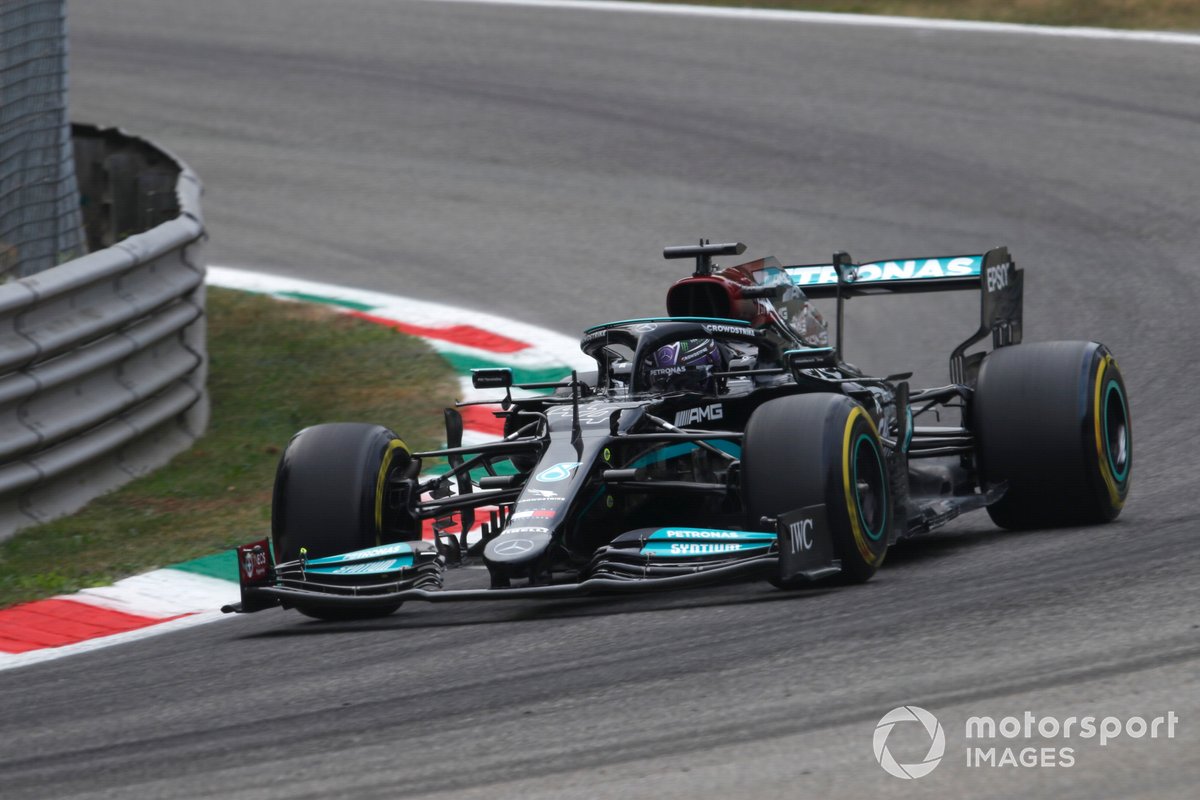 22/22
The rear wing favoured by Mercedes is similar to the low-downforce arrangement used by the team in 2020.