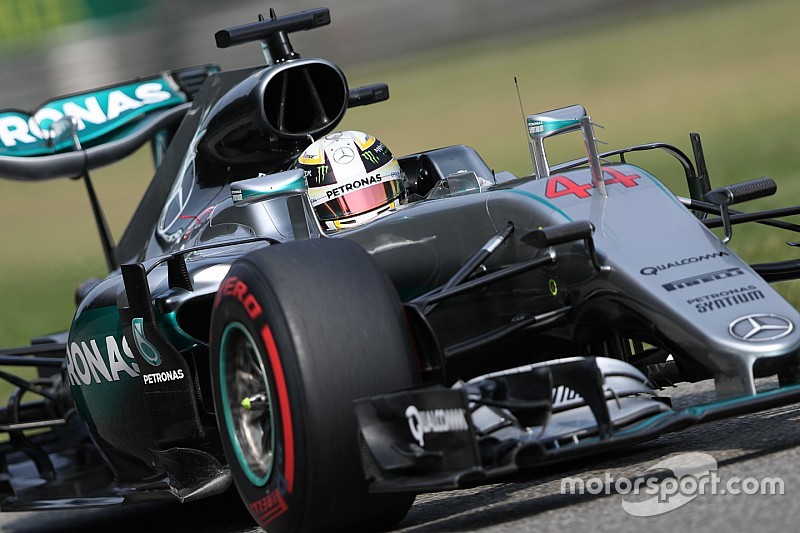 Lewis Hamilton set a blistering pace ahead of qualifying for the Italian Grand Prix, the Briton topping the times in final practice.

Hamilton used Pirelli's supersofts to set a best time of 1:22.008 that put him nearly four tenths of a second ahead of his Mercedes teammate Nico Rosberg, second fastest.

Mercedes, which has led all sessions with a 1-2 so far, appeared to be in a league apart once more.

Teammate Kimi Raikkonen was fourth, 1.1 seconds off the pace, ahead of the two Williams of Valtteri Bottas and Felipe Massa.

The Red Bull team continued to lag behind the leading cars, with Daniel Ricciardo and Max Verstappen winding up seventh and eighth over 1.7 seconds off the pace.

As the fastest drivers took it easy at the start of the session, it was the Haas duo Gutierrez and Romain Grosjean who set the early pace.

But Grosjean's session came to an early finish when he lost the rear of his car 12 minutes into the session at the Variante Ascari, the Frenchman spinning into the gravel.

That triggered a Virtual Safety Car period while the Haas was recovered.

After that ended, the frontrunners jumped onto the track, Ricciardo moving to P1 ahead of teammate Verstappen, the Australian using supersofts while the Dutchman used the softs.

Hamilton and Rosberg - both on softs - moved to the top of the times right after that, the Briton posting a 1:22.856 as the German lost time behind a slow Verstappen, who appeared not to see his rival in the mirrors at the second chicane.

"What on Earth was that?" complained the Mercedes driver on the radio.

Vettel split the Mercedes duo, but fell nearly half a second short of Hamilton's best despite running on supersofts.

Raikkonen also used the softest rubber to move up to fourth, over six tenths off the pace.

At the back of the field, meanwhile, Esteban Ocon appeared to have more problems with his Manor after yesterday's stoppage, the Frenchman only completing an installation lap after the halfway point.

Verstappen moved up to sixth with a run on supersofts, but it was the Red Bull driver's time to get impeded, this time by Magnussen at Ascari.

With less than 20 minutes to go, Mercedes started to show its hand, first Rosberg going quickest with the best time of the weekend and seconds later Hamilton setting a blistering 1:22.008 that put him nearly four tenths ahead of his teammate and over 1.3 seconds in front of the Ferraris.

Vettel reduced the gap with less than 10 minutes left on the clock, but the German was still nearly a second off the pace despite running new supersofts.

The session came to an end with an incident from Renault's Jolyon Palmer, who went off at Parabolica.