Italian GP - Five out of ten for Ferrari

Luca di Montezemolo: "I am more unhappy than he [Fernando Alonso] is, but in a great family, you win and lose together..."

One could feel the excitement go up a notch or two driving into the Monza circuit this morning, as yesterday’s big crowd grew even larger, with fans flocking to watch the spectacle of the fastest qualifying of the year.

It was a session packed with exciting moments and the overall result for Scuderia Ferrari is a very positive one. 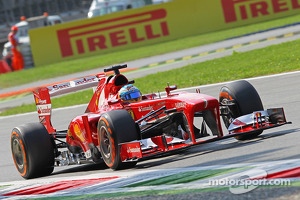 It has been repeated so many times this year that qualifying is not exactly a strong point for the F138 and normally Fernando and Felipe have to fight it out with at least three other top teams, usually in the shape of Red Bull, Mercedes and Lotus.

However, today, with the very surprising exception of an on form Nico Hulkenberg securing third place for Sauber, the only rivals preventing the Ferrari duo from having a clear view of the run down to the first corner tomorrow are the Red Bulls of pole man Sebastian Vettel and his team-mate Mark Webber.

Aware that competing with Red Bull using conventional means would be difficult, the Ferrari strategists decided to try and boost their performance by slipstreaming, the driving trick that this circuit is famous for and which led to it boasting the closest ever finish to a Grand Prix in 1971, when Peter Gethin won by just one hundredth of a second and even fourth placed Mike Hailwood was less than two tenths behind the winner!

This involved getting Felipe to run ahead of Fernando with the aim of punching a hole in the air that the Spaniard could then drive through with an added boost of speed. In the end, it didn’t really work out, partly because a Toro Rosso threw up a huge dust cloud after going through the gravel at the final Parabolica corner just ahead of Fernando.

In fact, inadvertently, Red Bull aided our cause, as Felipe admitted he got a great “tow” from Mark Webber’s car, which helped reduce his lap time! That contributed to the Brazilian setting the fourth fastest time, while the Spaniard is fifth, with Nico Rosberg alongside him on the outside of Row 3 in the Mercedes.

Another interesting aspect on this circuit where speed is king and power holds the key, is the fact that thanks to the aforementioned Hulkenberg and both Toro Rossos, five cars out of the top ten on tomorrow’s grid are powered by a Ferrari engine. Now, the biggest unknown for tomorrow’s twelfth round of the world championship could be the weather, as storms are predicted. The Scuderia is ready for whatever the weather and the opposition can throw at it.

Luca di Montezemolo: “Certainly we were hoping for a better result today, given the results of the morning session and then the first two parts of qualifying, but we are very close to the Red Bulls and I’m sure that with a good start, we can put them under pressure. The race is tough here and our long run pace is very good.

Even if I can’t be happy at seeing Hulkenberg’s Sauber ahead of us, I am pleased to see it up there with the best, because it shows we have a great engine. In terms of the World Championship, the aim is to be ahead of Vettel and also get Massa into a position where he scores good points.

Felipe has always gone well here, especially in qualifying and I expect him to have a good race tomorrow. Fernando is a great driver, who has done a lot for Ferrari and he is right to be unhappy at not securing better results: from that point of view, I am more unhappy than he is, but in a great family, you win and lose together and now I’m expecting the team to do their very best”.

Fernando Alonso (Q3: P5, 1:24.142): “Today went well compared to qualifying at recent races, with the car being competitive, allowing us to fight with the best. Of course, we weren’t at the same level as Red Bull, who yet again here have gone well all weekend, but the race is tomorrow and we start from what is all the same a good position.

Here at Monza the slipstreaming strategy is often used: having a car three to four seconds ahead of you allows you to gain a few tenths and for that I must thank Felipe, especially in Q3 when I came up behind Vergne’s Toro Rosso and he waited for me. The radio messages have been misunderstood, as is often the case when you don’t experience something first hand: the word ‘genius’ refers to the fact that we could have got out before Rosberg had gone by on his quick lap, but this should not raise any doubts about the impeccable job from the whole team.

Today, we were able to run competitively in all three sessions and get closer than ever before to the rear wings of the Red Bulls: for the first time, there are not so many cars between them and us, apart from Hulkenberg who was very strong in Q3. We will have to try and pass him on the first lap so they don’t get away from us”.

Felipe Massa (Q3: P4, 1:24.132): “I am very pleased with this qualifying result because, compared to yesterday, the car has improved and this makes me confident for the race. In Q3, I managed to put together a very good lap, making the most of Webber’s slipstream. It was a great help having him ahead of me by four seconds and even if maybe I lost time at Ascari, I am still satisfied with my performance.

We were well aware that at a track like this, it would be very important to have both cars in the top four and that tomorrow’s race will be a tough one. Even if the weather forecast is uncertain, we will be ready for anything and will try our best to get all the potential out of our car. It would be fantastic to give all the fans who are here at our home race to support us with so much affection a reason to be happy”.

Pat Fry: “After the results obtained in the last five or six races, we can be satisfied with our performance here today at Monza and with the positions from which Fernando and Felipe will start tomorrow’s race. Certainly, our aim is never just the second or third row, but fourth and fifth places on the grid are the result of a great job from the entire team over this weekend, in which we paid maximum attention to choosing the best possible package for this track.

We knew it would be a particularly close qualifying, as can be seen from the seven tenths that separate the 16 drivers as they went from Q1 to Q2. We took nothing for granted and even if the pace of the top two today was not within our grasp, we knew we could count on a quick and competitive car. Now, we are already concentrating all our attention on the race, because that’s the only thing that really counts and it will also allow us to analyse the overall performance of our car”.