Ecclestone confirmed city mayor Fernando Haddad had written him a letter "and he's guaranteed to revamp the whole facilities there".

Jul.11 (GMM) Interlagos has moved a step closer to securing its future on the F1 calendar.

Earlier this year, the future of the Brazilian Grand Prix came into doubt when F1 supremo Bernie Ecclestone said the venue in Sao Paulo must be upgraded. 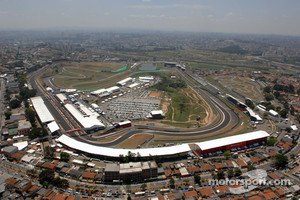 But those fears eased when Ecclestone confirmed city mayor Fernando Haddad had written him a letter "and he's guaranteed to revamp the whole facilities there".

It was said a new contract through 2020 would then be signed.

Now, O Estado de S.Paulo newspaper is reporting that the city has indeed opened up bids for the construction of an all-new three-storey pit and paddock complex and revisions to the layout, to be ready for 2015.

The report said Sao Paulo is paying for the project through an agreement with the tourism ministry, aimed at "maintaining F1 in Brazil and in the city of Sao Paulo", according to spokesman Nunzio Briguglio.

Honda to base F1 operations in UK