Inside story: What it’s really like to be an F1 mechanic 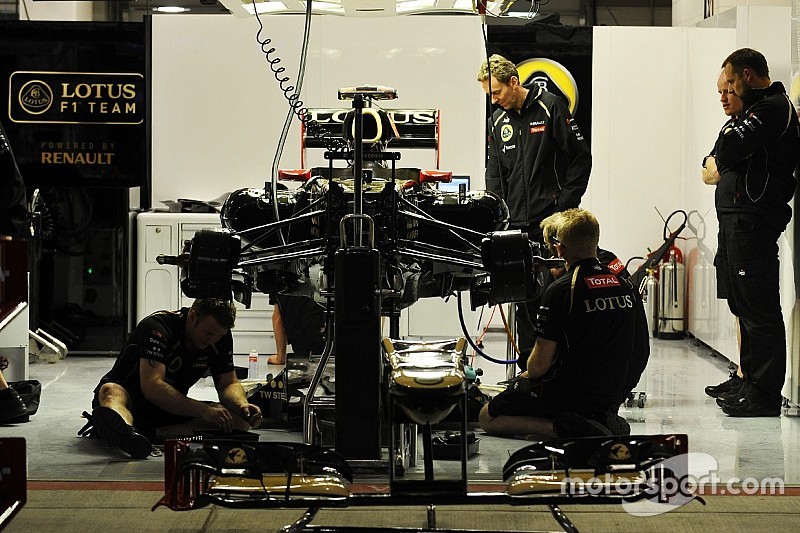 Baker started working for Williams Touring Car Engineering, which managed Renault's British Touring Car programme in the mid ‘90s. He then moved up to F1 with Arrows in 1997, before he joined the ranks of Renault in 2002.

As the chief mechanic, Baker has huge responsibilities in ensuring Lotus’s cars are in top shape all weekend.

“My role is to make sure that the specs of the two cars of Romain Grosjean and Pastor Maldonado are correct,” he says. “It’s also sorting out faults with cars, as well as the everyday management and dispatching work for the guys.”

He confirmed that a real love for the sport is essential to work in F1, where the demanding 19-race global calendar means plenty of long-haul flights as well as gruelling weekend schedules.

“You got to be passionate about motorsport for sure,” he adds. “If you want to work in F1, you have to be very highly motivated. You need to be able to work quickly, under pressure, and to make precise decisions as we have a limited time to work on the cars.

Baker believes that times have changed for the current breed of mechanics, compared to bygone eras.

‘The job has changed incredibly,” he confirms. “We travel a lot, we spend 10 hours in airplanes travelling economy class, and then there’s jetlag.

“Fifteen years ago you’d finish your work and go out to have a beer; whereas now, the guys finish and ask to go for a run or go to the gym. It has become more of a business now.

“The new generation of mechanics are not athletes yet, but physically they are very fit.”

The garage is set-up in time for the cars and equipment to be delivered to the track. For the rest of the opening day, the mechanics are busy putting the cars together with all the correct components.

“If it’s a European race, we travel early Wednesday morning and normally get to the circuit around 2 pm,” says Baker. “We can be there until 11 pm as there is no curfew on Wednesday night. We try not to leave things for the Thursday.

“We then fire up the engines on the Thursday morning, and check all the systems.”

The cars are taken to technical inspection, with their Mercedes V6 power units and gearboxes installed, ahead of Friday’s running.

The mounted tires are collected from Pirelli and regrouped in sets. The drivers and engineers walk the track, while the Lotus E23 Hybrids are checked one last time by mechanics.

Then it's Friday, the first day of track action – with two 90-minute sessions of free practice.

“We usually leave the hotel around 6:30am,” he adds. “It is the busiest day of the weekend for us. We’ll probably work right until the curfew.

“We rebuild the cars at the end of FP2. We fit a race engine and a race gearbox in each car. There are also parts to swap around, and certain suspension pieces that we change because of the mileage we put on them.

“If you’re working up to the curfew, you’d be back at the hotel and get four, five hour’s sleep, and then you’re back into it again.”

The mechanics leave the hotel around 7:30am on Saturday morning and get straight into it at the track.

“The gap between FP3 and qualifying is extremely small. We need to install race exhausts, race brakes, that kind of stuff. Each circuit requires different things.

“If you get to Q3, you get the cars from parc fermé, and then you have an hour and a half to look at the cars, take the floors off, make sure they are OK, and have them rebuilt so that they look like F1 cars.

“The parc fermé procedure has made a huge difference. Going back a few years, we’d arrive on the Thursday and basically work non-stop until the Sunday night. There were several engine changes to perform, plus taking care of the third car.

“It’s a lot more regulated nowadays. At least we get some sleep now.”

Sunday is the main event

The parc fermé procedures mean that Sunday mornings aren’t as hectic than times gone by, with no warm-up session to complicate matters.

During the race, the mechanics stay on their toes in the garage and execute tire changes. But their work doesn't end at the chequered flag.

“After the race is over on Sunday, we generally have about eight hours of work ahead of us. We pretty much strip the cars. Everything goes back to the factory in Enstone. To strip these completely takes a good four hours of work.”

For obvious reasons, the two long breaks during the year – in December and August – are welcomed warmly by the weary mechanics.

“The good thing about F1 is that we know all the dates in advance, so we can pretty much plan our whole year,” Baker concludes. “The guys know exactly when they’ll have time off.

"They spend enough time out of the country that we try to get them back home with their families as often as possible.”