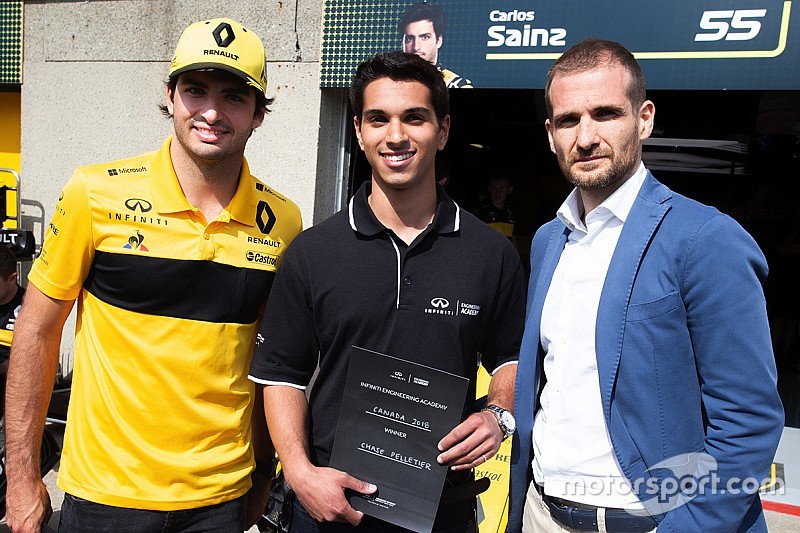 One young engineering student was handed a once in a lifetime’s opportunity to kickstart his Formula 1 career during the Canadian Grand Prix weekend.

In the pitlane in front of the Renault garage, Carlos Sainz revealed that student Chase Pelletier, 22, was the Infiniti Engineering Academy 2018 Canadian winner.

His prize is a six-month placement at both the Renault F1 Team at Enstone and another six months at Infiniti’s Technical Centre in Cranfield.

Pelletier was one of ten finalists for the Canadian region of the annual competition to find young engineering talent and impressed the judges over two days of challenges. He was immediately congratulated by both Carlos Sainz and Tommaso Volpe, director of global motorsport and performance projects at Infiniti.

“It’s an absolutely unbelievable feeling to be the Infiniti Engineering Academy 2018 Canada winner,” said Pelletier. “I came into this past week feeling confident but for it to be a reality and to get a placement at Renault is surreal and I’m looking forward to the experience ahead.”

Pelletier is specialising in Automotive Engineering at the University of Ontario Institute of Technology and was one of thousands of applicants for this year’s competition.

“For aspiring, young engineers this is really is the best way to reach the pinnacle of motor sport and I can’t wait to get started.”

In Montreal, the candidates faced a number of challenges to test both their engineering skills and the ability to work in a team. They included building a dragster model and working out a tyre compound strategy for the Canadian Grand Prix.

This year’s Infiniti Engineering Academy has also developed a partnership with Havard University and the candidates were observed on their decision-making by Dr Julia Hinson, a specialist in decision science.

“We are looking for candidates with strong technical knowledge, but also how good they are at working under pressure and in a team,” says Infiniti’s Volpe.

“With this detailed research from Harvard University as we run this programme around the world we can see if there is any variance in the decision-making process between different cultures.”

The Infiniti Engineering Academy (IEA) was launched in 2014 and the prize for the seven regional winners (from the US, Canada, Mexico, Europe, Middle East, China and Asia-Oceania) is a six-month placement at both Renault and Infiniti.

Speaking in the Montreal paddock, Bob Bell, technical director of Renault emphasised the importance of the programme: “The Infiniti Engineering Academy provides us with a constant source of talent. We get an extremely high calibre of people coming through our doors and on their work placements they are treated like a permanent member of staff. It’s a real benefit.”

If you’re a current engineering student and fluent in English then visit http://academy.infiniti.com for more information.