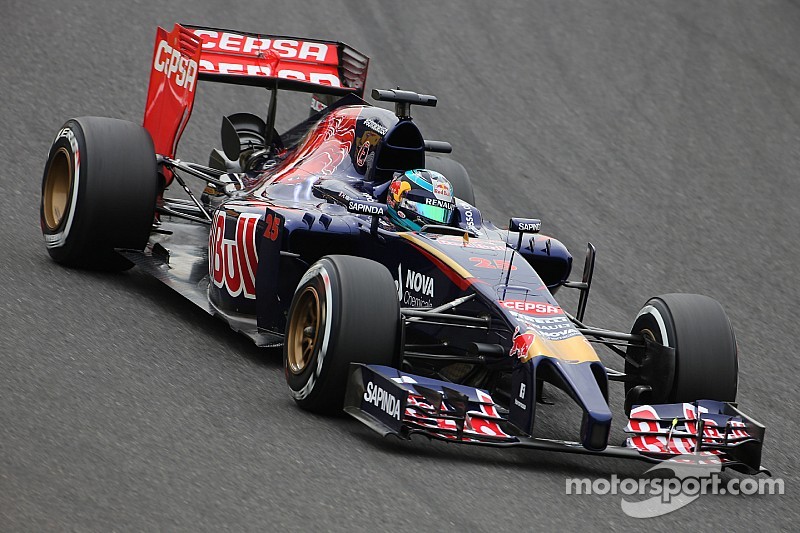 Daniil Kvyat: "It’s been a very special Saturday here in Japan today, as I was told that I would be driving for Infiniti Red Bull Racing next year."

Jean-Eric Vergne (Q2 1:34.984, pos. 11th): "I'm really satisfied with my Qualifying today, especially considering how the weekend had gone so far for me. I didn't drive FP1, I had two technical issues in FP2 which shortened my running time, I could complete only 3 laps in FP3 this morning.

However, the team was able to set up the car in time for Qualifying and I managed to do my job well this afternoon on a difficult track like Suzuka. It 's an extremely good job from the whole team, something to be pleased about. The race is tomorrow and anything can happen, even starting from the back of the grid."

Daniil Kvyat (Q2: 1:35.092, pos. 13th): “It’s been a very special Saturday here in Japan today, as I was told that I would be driving for Infiniti Red Bull Racing next year. It’s a fantastic feeling and a great opportunity and honour for me, so I want to thank Red Bull for trusting me. As for Qualifying today, I’m happy with our general performance, but we could have done better.

Q1 was fine, but in Q2, my last flying lap was disrupted by some slower cars in front of me. When I arrived in Turn 1, my tyres were not up to temperature and so the lap was compromised, as getting into a rhythm is very important here. But still, I’m looking forward to tomorrow’s race, whatever the weather may be!”

Ben Waterhouse (Deputy Technical Director): "This morning we had a normal session for Daniil, running a typical programme without any issues. We managed to get a good performance out of the car and so we were quite pleased with the job done. On Jev's side we had anticipated that we may have to replace the engine and actually we had to put the car in the garage early in order to change it. So after a great job by his car crew we managed to get the car out and ready in time for Qualifying.

The session itself was slightly disappointing, as we didn’t get the most out of the cars. Both drivers encountered traffic on their outlaps in the final run of Q2, otherwise they could have possibly qualified higher up the order. But it’s the race that counts and with the weather forecast as it is, we have every chance of getting a good result. Unfortunately, Jev will have a slightly more difficult afternoon, as he takes a ten place grid penalty because todays engine change meant fitting his sixth of the season.

The most important thing is that he managed to qualify above P12 and so he takes all his penalty here, with none of it carried over to Russia next weekend. Jev did well, considering how little running he has had this weekend.

We had a big push from the guys in Faenza and Bicester to have a new package this weekend and I think tomorrow we can get more of the potential out of it and hopefully score some good points.

Ricardo Penteado (Renault Sport F1 track support leader): "It was a busy day for us today with the ICE change on JEV’s car between FP3 and qualifying, but all went smoothly and the maps and new parts performed as planned. Both drivers did a good job but unfortunately got caught in traffic on the last run of Q2, which was a shame as we believed they had the pace for Q3. But tomorrow will bring a very different scenario with the rain so let’s see what we can do – hopefully we can see some of the same overtaking from Singapore!”

Lotus endured a frustrating qualifying session for the Japanese GP

Ferrari at Suzuka: For the sixth time this season Alonso qualified fifth