Motorsport.com's editorial team delivers a three part tribute to the two men lost on these days 20 years ago. Rubens Barrichello suffered a scary crash, while Roland Ratzenberger and Ayrton Senna would perish in on track accidents.

It only took 15 minutes of cars on track in the first qualifying session for a major accident to occur. Around 1:15 p.m. on April 29, 1994 a Formula One driver by the name of Rubens Barrichello found himself in a very dangerous situation. Hanging upside down, uncouscious, in his race car.

“That is a serious off for Barrichelo, the red flag is out,” the television commentator stated.

The television coverage loomed over the inverted car of Barrichelo. They quickly flipped it back over. A gruesome scene was shown as Barrichelo’s head flopped lifeless in the car. 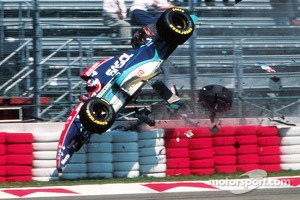 “Professor Watkins, straight to Rubens Barrichelo who is sitting in his car…” the commentary track continued.

Finally, a replay showed the world how this driver found himself upside down.

“Something went very badly wrong indeed, and it looks to me like something in the suspension…OH! And a very bad impact, high up into the tire barrier!”

At approximately 140 mile per hour, in a chicane at Imola called Variante Bassa, Barrichello hit the curbing, causing his car to become airborne.

It caught the low tire barrier, causing it to flip in the catch fence, and then back to the ground and onto its roof.

“I had a scary moment yesterday,” said Barrichello, speaking during the time trials broadcast the following day.

“I pressed the brakes and then I can’t remember anything I just remember afterwards in the medical centre when Senna was beside me.”

There are dozens of stories surrounding every significant event in history. Everything is viewed from multiple points of view. 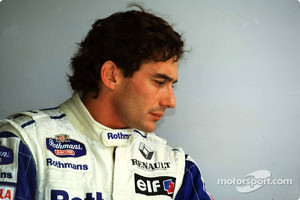 Barrichello remembers heading into the Variante Bassa corner, hitting the brakes and then waking up in a medical care center with his close friend and countryman Ayrton Senna standing next to him.

Senna’s perspective on the day was much different. He was leading the practice session that late April afternoon.

He was on track when the incident occurred. He was immediately told about the accident, and darted straight for the medical centre when he arrived back in the garage.

With the medical centre barred off, Senna resorted to hopping fences and breaking in the back door to check on the condition of his friend.

“The first face I saw was Ayrton’s. He had tears in his eyes. I had never seen that with Ayrton before. I just had the impression he felt as if my accident was like one of his own,” Barrichello said.

Once he found out Barrichello would be alright, he headed back to his car and promptly put it on the provisional pole with the fastest time of the weekend.

With all the potential dangers of the track, the cars, the racing, and the evidence staring him, and the whole field in the face in a close call with Barrichello, everyone soldiered on, because that is what race car drivers do. 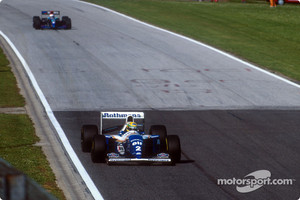 Damon Hill was racing with Williams-Renault with Senna that season, and recalls the violence of the accident, but said everyone just kept on racing.

What shook us most was the rate at which the car took off; at one stage it looked as if it was going to smash through the fence and fly into the grandstand. The Jordan, more by luck than anything else, finished on its side, upside down and against the barrier. That was bad enough but the marshals promptly tipped the car over and, as it crashed on to its bottom, could see Barrichello’s head thrashing around in the cockpit,” Hill said.

"We all brushed ourselves off and carried on qualifying, reassured that our cars were tough as tanks and we could be shaken but not hurt.”

Unfortunately, there were still a pair of tragedies waiting to occur. Barrichello’s accident was just the precursor to a weekend that would go down in infamy.

Haas not ruling out Domenicali for F1 team

Pump up the volume