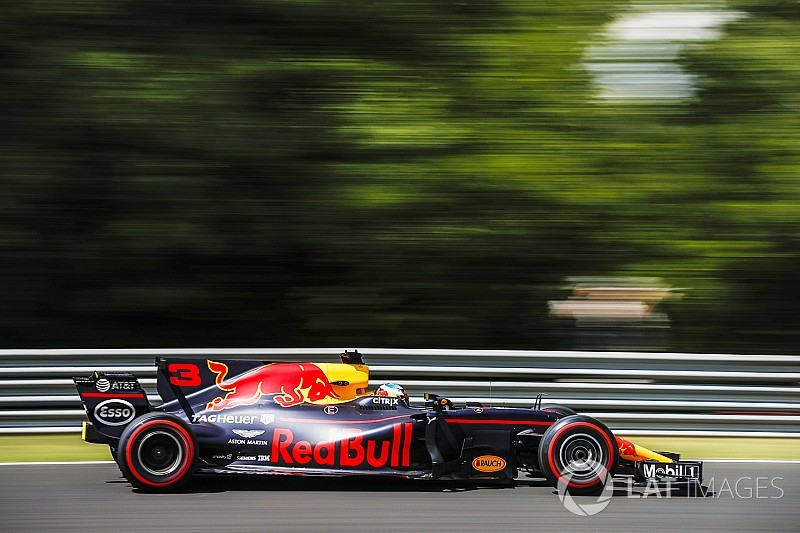 Daniel Ricciardo continued his impressive pace in the upgraded Red Bull ahead of Formula 1's Hungarian Grand Prix with the quickest time in second practice.

Ricciardo, who was fastest in the opening 90-minute session at the Hungaroring, clocked a 1m18.455s on the supersoft tyres to finish 0.183 second clear of Sebastian Vettel.

Valtteri Bottas was third fastest, ahead of Kimi Raikkonen and Lewis Hamilton, with the top five drivers separated by just 0.324s.

Much of the early running was completed on the soft compound tyre, with Hamilton leading the way with a 1m18.779s, six tenths quicker than Ricciardo.

Championship leader Vettel was the first to switch to the supersofts and promptly went top of the charts with a 1m18.638s.

Hamilton did not improve his time after failing to get a clean lap together, but Bottas and Raikkonen did to go second and third.

Ricciardo then bolted on the supersofts to go quickest of all, a fraction quicker than he managed in the morning session.

Focus had just switched to gathering long run data when Pascal Wehrlein crashed heavily at Turn 11 to bring out the red flag.

The rear of the Sauber stepped out as he went through the right-hander and when Wehrlein corrected, the car spun in the opposite direction.

The German clouted the barrier with the front-right and then ricocheted into an adjacent barrier, damaging the left-hand side of the car.

Wehrlein, who was 20th quickest, was able to exit the car unassisted but was taken to the circuit's medical centre for precautionary checks. He was given the all-clear.

It was another frustrating session for Jolyon Palmer, who was forced to revert to the old-spec floor for FP2 following damage in an incident in FP1.

The rear of his Renault stepped out at Turn 14 and as Palmer corrected, the car lurched the other way and sent him sliding into the barriers to bring out the red flag again.

Haas did an impressive job to get Kevin Magnussen out for the closing stages of the session, after Antonio Giovinazzi crashed in the first session.