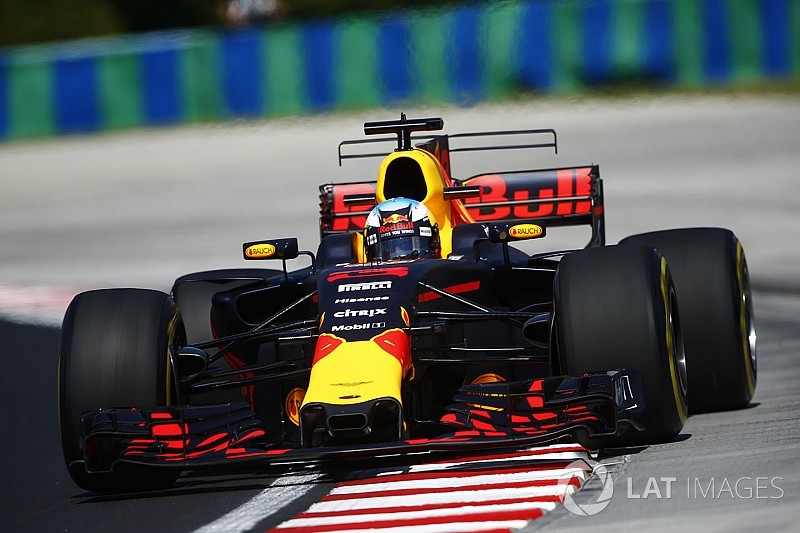 The Red Bull driver clocked a 1m18.486s on the supersoft Pirelli tyres, the time just 0.05 seconds slower than the fastest ever lap of the Hungaroring in an F1 car, set by Rubens Barrichello in 2004.

The Australian, running in an updated Red Bull, finished 0.234s seconds ahead of Ferrari's Kimi Raikkonen, with Lewis Hamilton in the Mercedes just over a tenth further back in third.

Championship leader Sebastian Vettel struggled with oversteer in a scrappy session and ended up sixth quickest, one second adrift of Ricciardo.

It was Valtteri Bottas who set the early pace, the Finn clocking a 1m19.451s on the supersofts before making a series of improvements to drop down into the low 1m19s.

Teammate Hamilton then became the first man into the 1m18s, only to be usurped by Ricciardo, who pumped in a series of quick laps to sweep to the top of the times.

Attention then turned to gathering long-run data, particularly on the supersoft tyre, at the Hungaroring.

Bottas was fourth quickest, ahead of Max Verstappen, with McLaren getting both cars into the top 10 as Fernando Alonso and Stoffel Vandoorne finished seventh and eighth respectively.

Renault's Nico Hulkenberg and Jolyon Palmer were separated by three tenths of a second as they completed the top 10.

Palmer brought an early end to the session when he ran wide at Turn 4, driving over the exit kerb, which shattered his front wing, caused a puncture and scattered debris across the track.

The Briton tried to recover to the pits, but was ultimately forced to stop the car at the side of the circuit.

Felipe Massa was the leading Williams in 11th, four tenths quicker than teammate Lance Stroll, and just a fraction ahead of Force India's Sergio Perez.

It was a frustrating morning for Haas, with Antonio Giovinazzi - in for Kevin Magnussen for FP1 - bringing out the red flag when he lost the rear at Turn 11 and ended up in the barriers.

Earlier in the session, Romain Grosjean also ran of track, sliding gingerly into the tyre barrier and damaging the rear wing.

The Franco Swiss driver spent most of the session in the garage but managed a flurry of laps in the closing stages and ended up 16th fastest.

Alonso says Indy the only positive moment of 2017