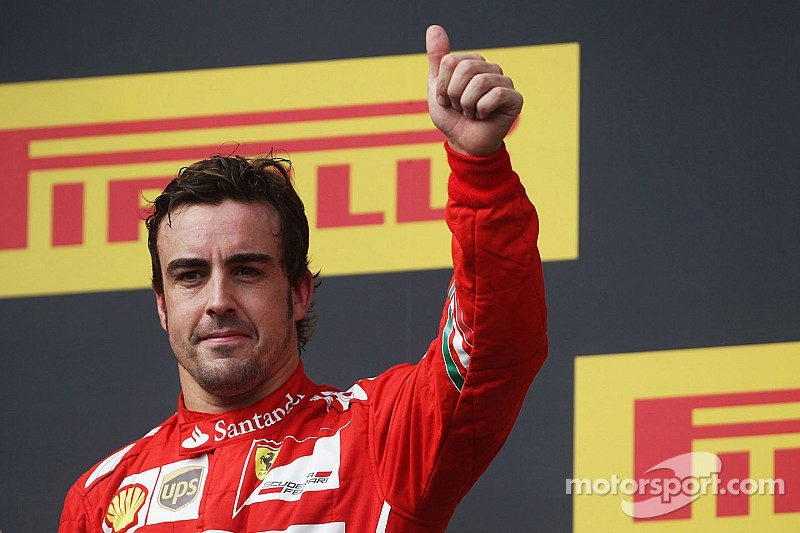 Fernando Alonso finished the Hungarian Grand Prix in second place to give Scuderia Ferrari its second podium of the season after China, a fantastic morale booster going into the summer break.

Budapest –  It was a truly incredible drive from the Spaniard who made the most of the slippery conditions at the start to create the building blocks for the rest of the race. He led for a total of 27 laps, only giving best to eventual winner Daniel Ricciardo on lap 67, the Australian Red Bull driver running on much newer tyres, having made three stops, while Fernando fought off strong opposition from the returning Mercedes duo behind him.

To complete a very positive day for the Scuderia, Kimi Raikkonen also put in a strong drive from sixteenth to sixth, to bring home valuable points for the Constructors’ Championship in which Ferrari re-takes third place. Lewis Hamilton completed the podium trio. Alonso is now the only driver to have scored points in every race this season.

The 70 lap Hungarian Grand Prix turned out to be a fantastic advertisement for the sport of Formula 1 with battles and overtaking throughout the field, with people running different tyre strategies. This weekend’s duel between Fernando and Ricciardo was never going to last as long as their fight in Germany last weekend, as the Australian had a huge tyre advantage. As for third placed Hamilton, the Englishman took his Mercedes from a pit lane start to the podium, a remarkable achievement….nearly as remarkable as Fernando’s! In the post-race press conference, the man from Oviedo didn’t feel it was one of his best races, although the assembled media didn’t agree.

Fernando got a fantastic start from fifth in the wet, with everyone running Intermediates and was third by Turn 2 behind Rosberg and Bottas, as Vettel had a poor start dropping to fourth. Kimi made up two places to be 14th. On lap 2, Fernando lost fourth to Vettel when he ran wide and Kimi was 13th.

On lap 8, the Safety Car come out after Ericsson had a huge crash in the Caterham after Turn 3. This worked against Alonso and the other leaders, as they had just gone past the pits, while those further back, including Kimi, all charged straight into pit lane to fit slicks, so that Fernando had to wait a further lap before pitting.

Lap 23 saw the return of the Safety Car as Perez had a huge crash coming onto the pit straight. Ricciardo and Massa came in for fresh rubber, as did Bottas, which promoted Fernando to the lead, ahead of Vergne, Rosberg, Vettel and Hamilton so that Kimi was ninth.

Fernando came in for his second stop, taking on new Softs on lap 38 and it was here that he and the Ferrari strategists secured his podium finish. Realistically, he would have to make one more tyre stop, aiming for a possible fourth place finish. But with his usual skill and grit he did an incredible job of nursing a set of Soft tyres for a massive 32 laps all the way to the chequered flag.

By lap 56 Alonso’s lead over Hamilton came down to 1.2 seconds. Lap 61 the gap was just 0.8 with Ricciardo only 0.5 behind Hamilton. Lap 66 and Fernando’s mirrors were finally full of Red Bull as Ricciardo managed to get ahead of Hamilton. The Australian was on much fresher rubber and inevitably went past Fernando on lap 68. That left three nail-biting laps for the Spaniard to make his Ferrari as wide as possible, just holding off Hamilton to the flag.

Marco Mattiacci: “It was a great race and very pleasing to see our team fight back from an extremely complicated Saturday. Kimi and Fernando demonstrated just what they are capable of and the whole team was up to the task. However, this result is just a step on a journey which started a few months ago. Fernando’s second place is a confidence booster and a sign that the major effort everyone is making to bring Ferrari back to the top is moving in the right direction, however we have to be realistic about it. Here, the weather and the track conditions leveled out the performance differences and that’s why we must not delude ourselves. Now we must just go back home, set on always doing better.”

Fernando Alonso (P2 - Fast Lap: 1.27.419): “This podium means a lot to me and the whole team, because after so many difficult races, we managed to get the most out of everything, also taking a few risks and second place seems like a win. To do 31 laps at the end on used Soft tyres was a great challenge. At that point, the strategy suggested that if we had made a third stop, we could have finished fourth, but we decided to run to the flag instead. This race shows that anything is possible when there are unusual conditions like today, with a wet start and the appearance of the Safety Car. We managed to make the most of all opportunities that presented themselves, taking the best decisions even at the most difficult moments. Sure, the characteristics of the circuit, with its limited overtaking opportunities, helped us and that’s why we have to be realistic and continue to work on the car, to improve in all aspects.”

Kimi Raikkonen (P6 - Fast Lap: 1.27.983): “Today’s race was difficult, but much more fun than the others, as I had a good feeling with the car, the pace was good and I felt I could push. After the way qualifying went yesterday, sixth was the most we could hope for. At the start, I got away well but then I lost vital time behind a Sauber and when I caught Massa’s Williams, I couldn’t get past: here in general, overtaking is not easy and we lack speed down the straights. Sure, this is a good team result, but we must not get too excited, because even if there are signs of improvement, we still have much work to do in a lot of areas to get to where we want to be. We’ve had a very complicated start to the season, but I hope the second part of the championship will go better. I have great faith in the team and I feel we are going in the right direction. Even if it’s going to take some time, I’m sure the results will come.”

Pat Fry: “After mixed fortunes in qualifying yesterday, today the team showed it could react extremely well and keep a cool head when faced with the variable situations that arose during the race. It’s never easy in cases like this, with rain at the start, the Safety Car, having to avoid traffic and especially with having to keep faster cars behind us, but the team performed very competently. The F14 T demonstrated the good race pace it had already shown on Friday and that has helped us re-take third place in the Constructors’ classification. After the summer break, we come to two races that will be difficult for us, on two tracks where it will be important to make the most of any opportunity, just as we did today. On behalf of the team, I wish to congratulate Fernando and Kimi. We had promised them redemption and we were true to our word. We know that there is still a long way to go, but we will spare nothing in our efforts, continuing to work hard to improve, day by day.”

Hungarian GP: Who was your Driver of the Day in Budapest thriller?