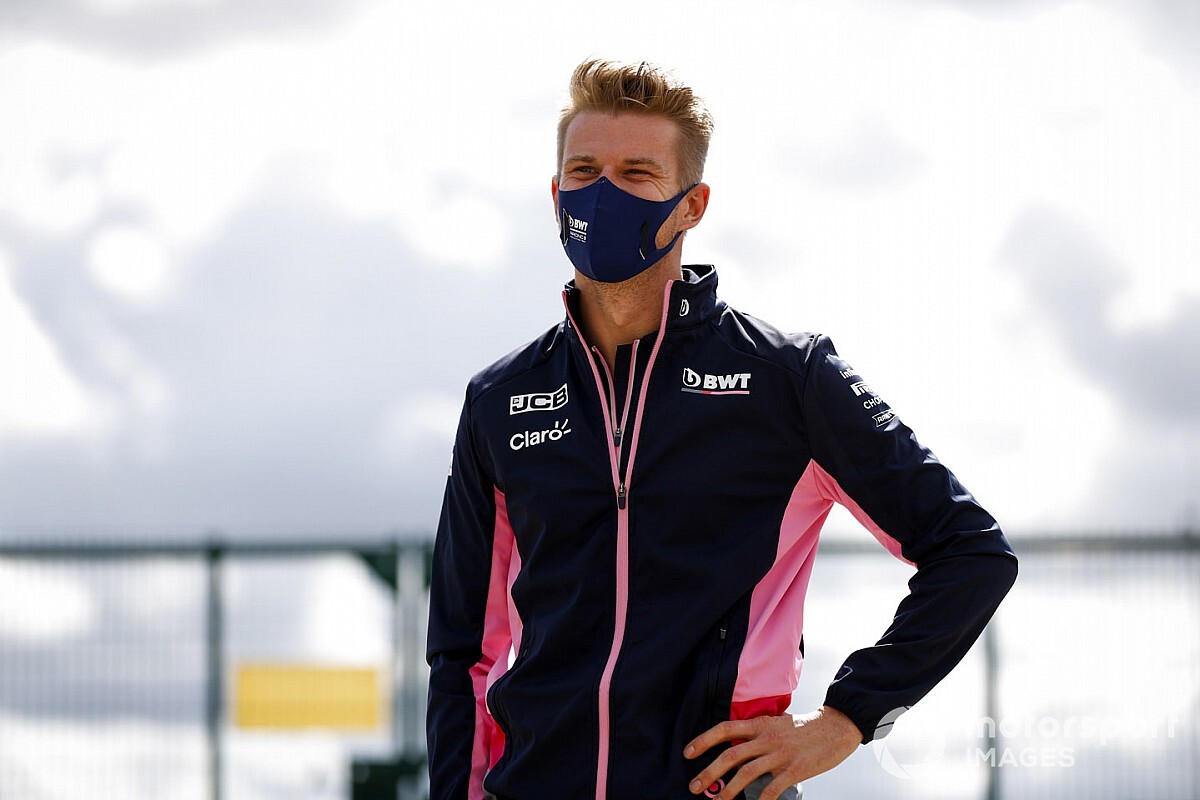 Nico Hulkenberg says that he's in talks with some Formula 1 teams about a possible full-time return in 2021.

The German was called in to deputise for Sergio Perez at last weekend's British GP, although he didn't get to start the race after a clutch issue meant that the team couldn't start his power unit.

Hulkenberg remains on standby for Racing Point this weekend.

Perez's quarantine period has officially ended, but the Mexican needs a negative COVID-19 test before he is allowed back into the paddock.

Hulkenberg says there have been no firm developments on his future, but suggested that there could be more news in the next two weeks.

"I've been in contact with quite a few people from the F1 industry, and team principals, because obviously we all know each other," he said.

"Some is just casual chat, some is more about the future subject. So definitely in discussions and in talks there.

"But nothing to say concrete yet there. I guess it's still a matter of a couple of weeks before things will get a bit more concrete and firm.

"If not F1, to be honest, that is not so clear in my mind yet either. I think I'll take one step at a time and then see how things roll, and which way they're going in a couple of weeks' time."

Hulkenberg acknowledged that a second race outing this weekend could do him no harm.

"Of course, if you have a strong result, it's always a good advertisement. But you know that that stands always, and that's valid all the time.

"But I think people and especially team principals, they don't just look at one event, a one-off, especially when it's under these circumstances.

"So of course, it would be good and I would love to have a great, great race and if I'm, if I'm in the car, I just want to be a good replacement to help the team as much as I can, and contribute. during the race weekend. And the rest, I think that will sort itself out later, and it's kind of a separate matter."

Asked if it would be frustrating to be on the sidelines this weekend, he said: "Yeah, obviously that would be of course somewhat disappointing, after having been back in the car and getting a taste of it and then this, but obviously it was always clear that I come in as a temporary replacement for Checo, not knowing if it's one race, two races or what, so obviously he's the main driver and whenever he's good to race again, he'll be back."

Although he didn't get to race last weekend Hulkenberg's return went down well in the paddock, with Mercedes boss Toto Wolff acknowledging that he was a good choice for Racing Point.

"It's definitely nice to hear that feedback and the opinions of people about it," said Hulkenberg. "Definitely well received, and nice to read it and then hear that for me personally, I think it doesn't really play a big role when it comes to future questions.

"Because at the end of the day there's other things that they're looking at then, and if it fits or not with the team, but obviously I did what I could in the given circumstances. I think it went okay.

"Of course, it could have been better here and there, which is kind of normal, and what you would expect at this notice, but all in all, I think it was quite okay."