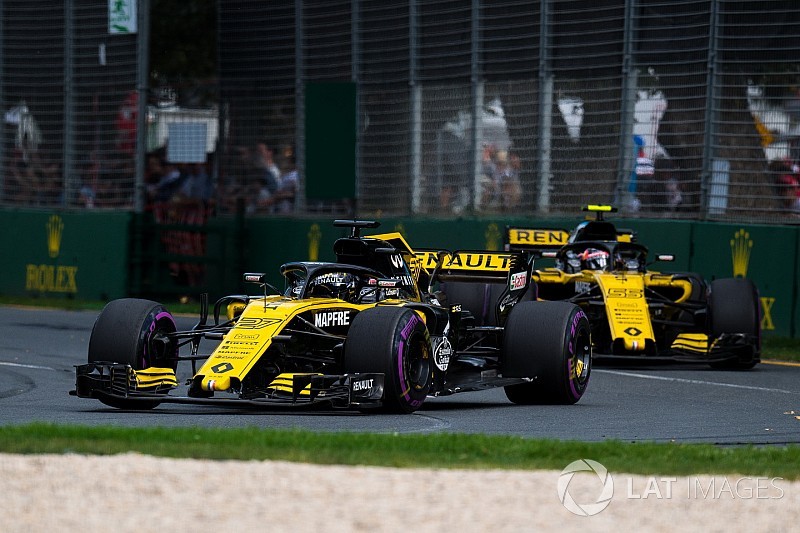 Nico Hulkenberg and Carlos Sainz have made Renault's Formula 1 car development "much easier" by being "completely aligned" in their feedback, according to chief technical officer Bob Bell.

The duo are in their first full season as F1 teammates, with Hulkenberg having arrived from Force India ahead of the 2017 season and Sainz joining from Toro Rosso midway through that campaign.

Hulkenberg has enjoyed a markedly stronger start to 2018 thus far, outqualifying Sainz three times and outscoring him 22-3 in the standings - but Bell says both drivers have been a huge asset to the development of the RS18.

"They are brilliant, those two," Bell said. "They are completely aligned about what they say about the car – and it's not because it's some sort of conspiracy!

"The car has got some obvious faults which they pick up on and tell us race after race, and they are completely aligned.

"A lot of those faults are common up and down the pitlane, all got nervous entries, mid-corner understeer and lack of traction on the exit. Some teams have got it more than others, the traits are quite similar, I suspect.

"The drivers are great, aligned on the issues of the car and that makes our jobs much easier. It's been a real pleasure to work with both of them."

When Bell's comments were put to Hulkenberg by Motorsport.com, the German said: "Yeah, we [he and Sainz] seem to want the same thing from the car.

Asked what the process of working with Sainz was like, he said: "It's been OK. There's not any process, to be honest, because it works fine without anything.

"We're both doing our job, we're professional enough, we have respect for each other.

"We're both trying to do the best job for the team and for our own careers, it works totally fine."

Hulkenberg, who previously partnered Rubens Barrichello at Williams, Paul di Resta and Sergio Perez at Force India, Esteban Gutierrez at Sauber and Jolyon Palmer at Renault, insisted that he got on well enough with all of his past F1 teammates.

"Of course there are some differences between personalities, but for me all my teammates were pretty easy-going and alright."

Pushing it too far? FIA to present F1 teams with solutions to avoid pit stop errors

Why F1 is on "disruptive" Aston Martin's radar