Spa is the first real high-speed challenge since Silverstone.

Aug.23 (GMM) Nico Hulkenberg has denied he is feeling nervous about racing at Spa-Francorchamps this weekend. 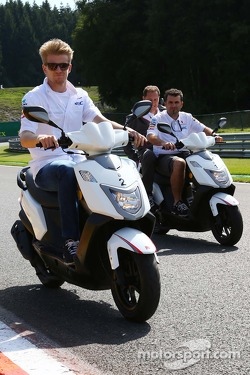 Nico Hulkenberg, Sauber rides the circuit on a moped.

The sport has subsequently raced at the Nurburgring and Hungary without incident, due to tyre structure changes and strict new operating guidelines.

But Spa is the first real high-speed challenge since Silverstone.

"I suspect Pirelli engineers have travelled to Belgium with some concerns," technical expert Gary Anderson told Speed Week, explaining that the extra load on the tyres through the infamous Eau Rouge will be "enormous".

Indeed, Auto Motor und Sport reports that Pirelli has redoubled its efforts to ensure teams will follow the new strict guidelines for pressure and camber this weekend at Spa.

So is Sauber driver Hulkenberg worried?

"Why?" the German said in an interview published by Speed Week.

"No, I have no concerns. I have heard nothing about that from the engineers.

"Pirelli has given us precise values in terms of the camber and pressure, so I expect no problems," added Hulkenberg.

Hulkenberg sees no chance of making F1 comeback in 2022