Nico Hulkenberg “couldn’t see” Romain Grosjean as they clashed on the opening lap of the Abu Dhabi race, which sent the Renault Formula 1 driver into his spectacular airborne accident.

The duo were fighting over seventh place as they approached the Turn 8/9 chicane at the end of the Yas Marina Circuit's main straight.

They both locked up and went deep into Turn 8, but Grosjean remained on Hulkenberg’s right-hand side for the apex of Turn 9 and they touched wheels – sending the German driver into a dramatic series of flips towards the barriers on the edge of the track.

“[It was] very disappointing but I think we have to put it down as a racing incident,” Hulkenberg told Sky Sports after the race.

“Racing Romain into Turn 8 – we both locked up, I went wide, he went even wider so I thought he ran off the track and I had Turn 9 to myself that’s why I went for the apex.

“But obviously he was still there and wheels made contact and the rest we’ve seen – just a couple of flips, which obviously look spectacular but nothing really dramatic.

“It looked spectacular, [but] not a hard crash – no heavy G impact – so no problem from that point of view.

“[It’s] unfortunate I didn’t see Romain. We both raced hard into Turn 8, both late on the brakes.

“I couldn’t see him – he was in my blindspot and the rest is history.

“Still, disappointing because it’s a long build-up of a race weekend and to be out so quickly is just always very hard to swallow and frustrating.”

Hulkenberg remained in his wrecked car – saying he was “hanging here like a cow” over his team radio – before it was safely overturned by marshals, who extinguished a small fire at the rear.

When asked if his car’s halo had stopped him squeezing out of the wreckage, Hulkenberg replied: “I don’t know, to be honest right now, if the halo blocked me or not.

“To the right I had the barrier anyway and then there was a very small gap.

“You know when you are upside down, it’s not so easy to find all the buttons and all the things because everything feels very different.

“It was the first time for me also to end up in the car on the roof. I was just sitting tight waiting for the marshals and they reacted very quickly and got me out.” 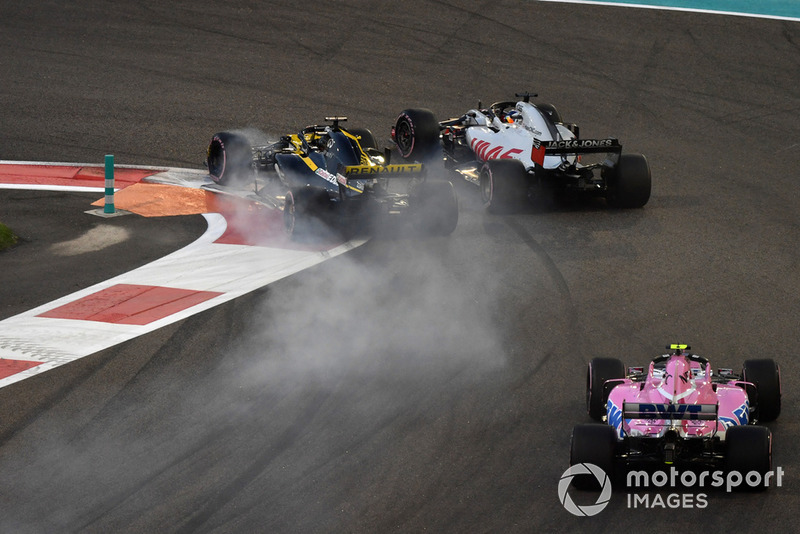