Today has been a very special day for HRT Formula 1 Team, as it wrote a new and important page of its history and of motorsport in general, in Monza where the first day of practice sessions of the Italian Grand Prix took place. History was made on two fronts: Pedro de la Rosa, who in Italy reaches his 100th Formula 1 Grand Prix, and Ma Qing Hua, who becomes the first Chinese driver ever in F1. 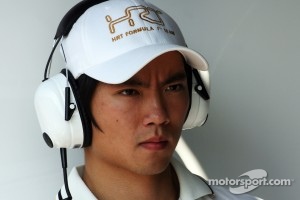 Pedro de la Rosa got his centenary Grand Prix off to a good start and was able to complete multiple aero configuration and tyre tests which, although still have room for improvement, have left good sensations.

Ma Qing Hua, who replaced Narain Karthikeyan for FP1 and faced an important challenge today, perfectly accomplished all the targets set by the team and covered 26 error-free laps and improved his performance and confidence lap after lap. Tomorrow, de la Rosa and Karthikeyan will have another 60 minutes at their disposal for testing before taking on the definitive qualifying session.

Pedro de la Rosa: "Today we enjoyed two clean sessions that enabled us to try out different aero configurations and complete a comparison of tyre compounds and a long stint towards the end in preparation for the race. We faced no problems and were able to complete all the tests as planned. We can still improve the car for tomorrow ahead of qualifying but we’ve set a good base for the race”.

Narain Karthikeyan: "We focused on testing different car set-ups and the car worked well with all of them. The shame is that we had to stop before the end because of an issue with the exhausts. It was a precautionary measure more than anything else and it will be fixed for tomorrow. But the best thing about the day was that I found a rhythm quickly and that the car performed well”.

Ma Qing Hua: "It was an extraordinary experience and I’m happy with my performance. From the start I felt comfortable in the car and working with the team, and I accomplished all the targets we set ourselves.

We started with quite a long stint on hard tyres and then we made changes to the set-up as I adapted to the F112. It was an important step for me, but also for motorsport in China since it’s a very young sport there but with a great potential”.

Luis Pérez-Sala, Team Principal: "I’m happy because Ma has taken another step in his development programme as a Formula 1 driver and he had a satisfactory debut. He did what was asked of him and showed clear progression, with no mistakes, to finish the session under the 107%.

Pedro also improved throughout the day and we cut down the distance to pole position, which proves we’re performing well. Narain found his rhythm immediately in FP2 but a problem with the exhausts forced us to stop before the end as a precautionary measure”.

James Courtney is a man on a mission