Spa-Francorchamps always offers a different challenge for Formula 1 teams on the set-up front, with the track having different demands throughout the lap.

The more technical middle portion of the circuit is sandwiched between two high-speed sectors that in normal conditions require the teams to make a trade-off between downforce and drag levels.

But with the long straights good for overtaking, most edge towards a lower downforce rear wing arrangement. They take the gains that come from this in the faster parts of the circuit, then deal with the pain that creates in the twistier section of the track.

However, with the weather set to play a significant role in the car's performance over the Belgian Grand Prix weekend, all the teams had to consider the ramifications of their choices come qualifying and race day.

In terms of the two title protagonists, Mercedes and Red Bull didn't want to be outdone by each other either, knowing that having too much wing on would leave them vulnerable to attack on the straights.

However, they still had to balance this against tyre wear too, as leaning on the tyres too much through the second sector would impact stint length during the race. 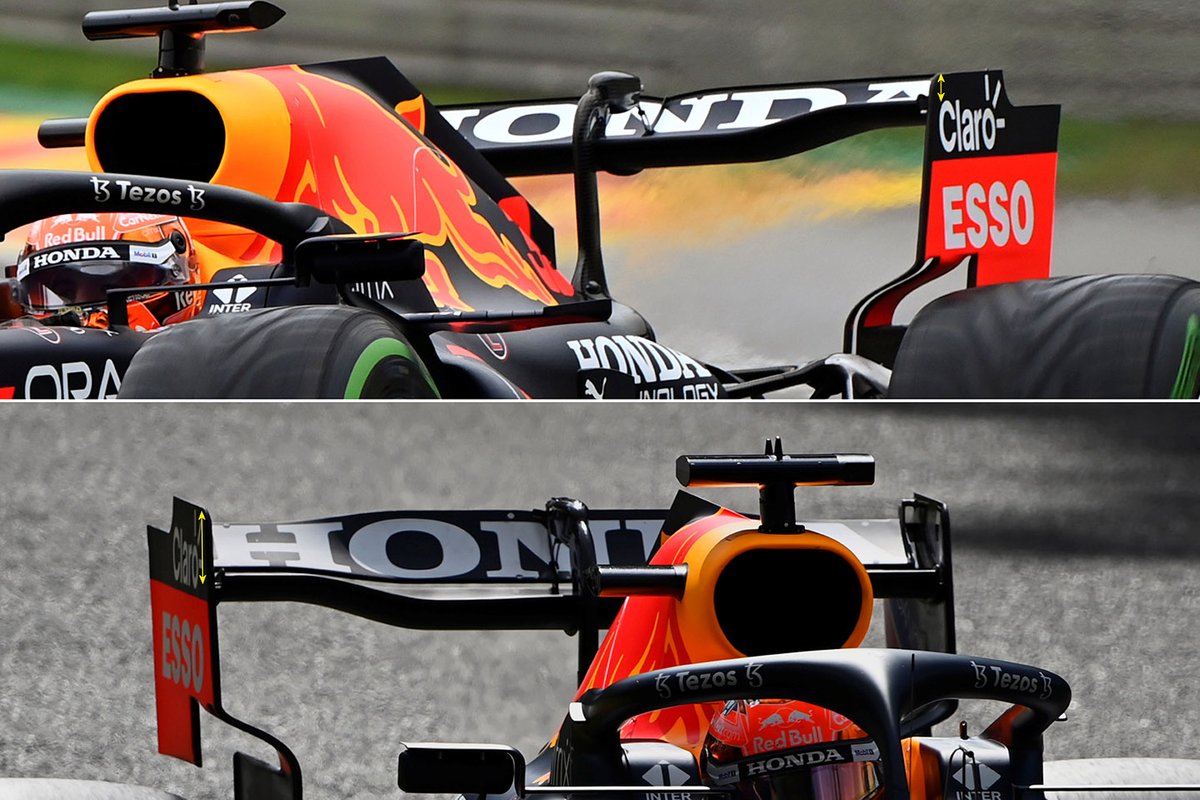 In order to accommodate their different run plans, both teams approached the weekend differently.

Mercedes tried out various options on Friday, whilst Red Bull ran what you'd consider to be the de facto choice for Spa until FP3 when it fitted Verstappen's car with a wing that we would normally see reserved for Monza (top).

The wing is still a similar spoon-shaped design, but you'll note just how much higher the mainplane is mounted on the endplate as the team looks to reduce the vortex created at the wing tip.

It didn't last long though, as the wet weather conditions forced the team's hand. It switched back to the higher downforce arrangement and interestingly also added a Gurney on the trailing edge of Verstappen's wing, whereas Perez continued to run without one until his car was rebuilt for the pitlane restart. 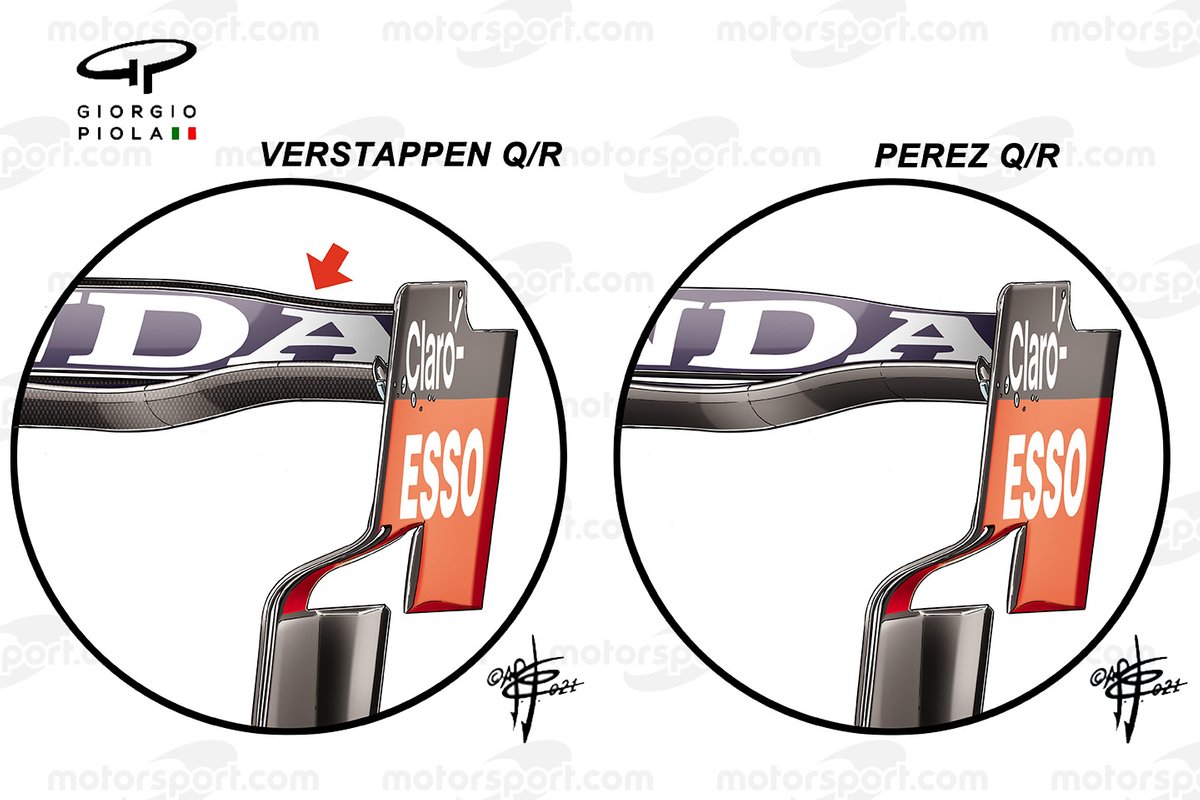 Meanwhile, Mercedes fitted its lower downforce rear wing to Bottas' car during FP1 to evaluate its merits before opting for the higher downforce model run by Hamilton throughout the weekend.

Notably, with the weather closing in on the circuit for qualifying, the team also added a Gurney to the trailing edge of its wing too, which helps to balance the car at the expense of some additional drag (blue arrow). 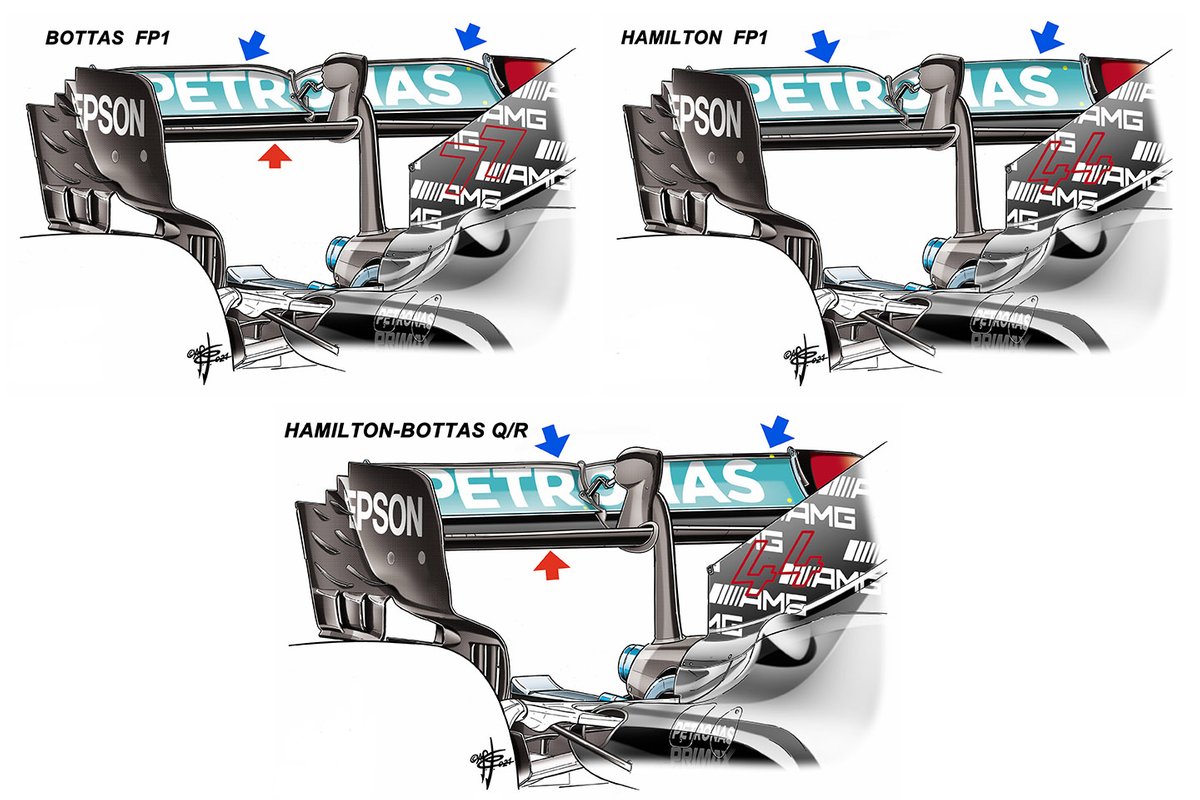 Aston Martin arrived at the Belgian Grand Prix with its own low-downforce offering but, rather than deploying just a different rear wing, it also had a rather novel solution for its front wing.

This revolved around the installation of a different upper flap, with two flat sections either side of a kink, which creates a very angular surface. 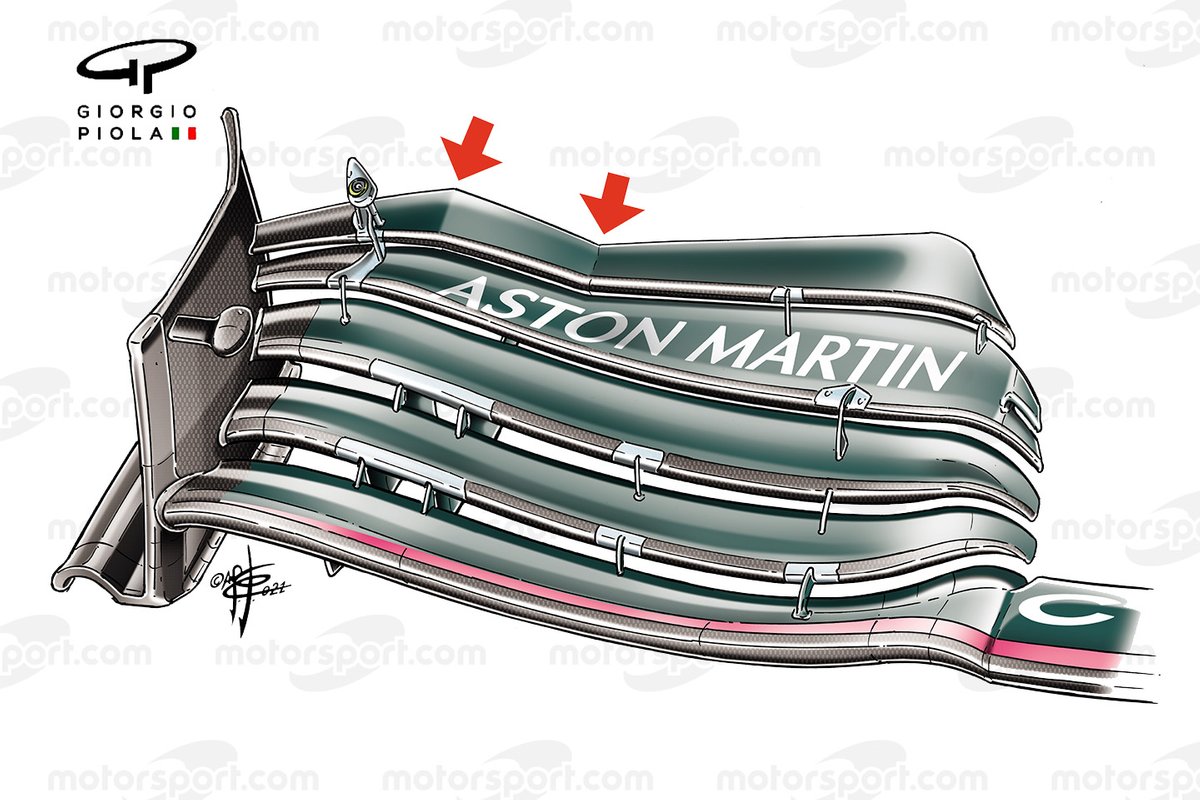 Teams have been compartmentalising the front wing's design for a long time now, with the outer section of the wing more or less used to create outwash, which helps drive airflow across and around the front tyre.

The change made by the team is likely in response to it not being able to get the desired balance with its existing setup when it relaxes the upper flap's angle, whereas this twisted geometry might offer it the ability to fine tune its downforce level, whilst providing the necessary outwash too. 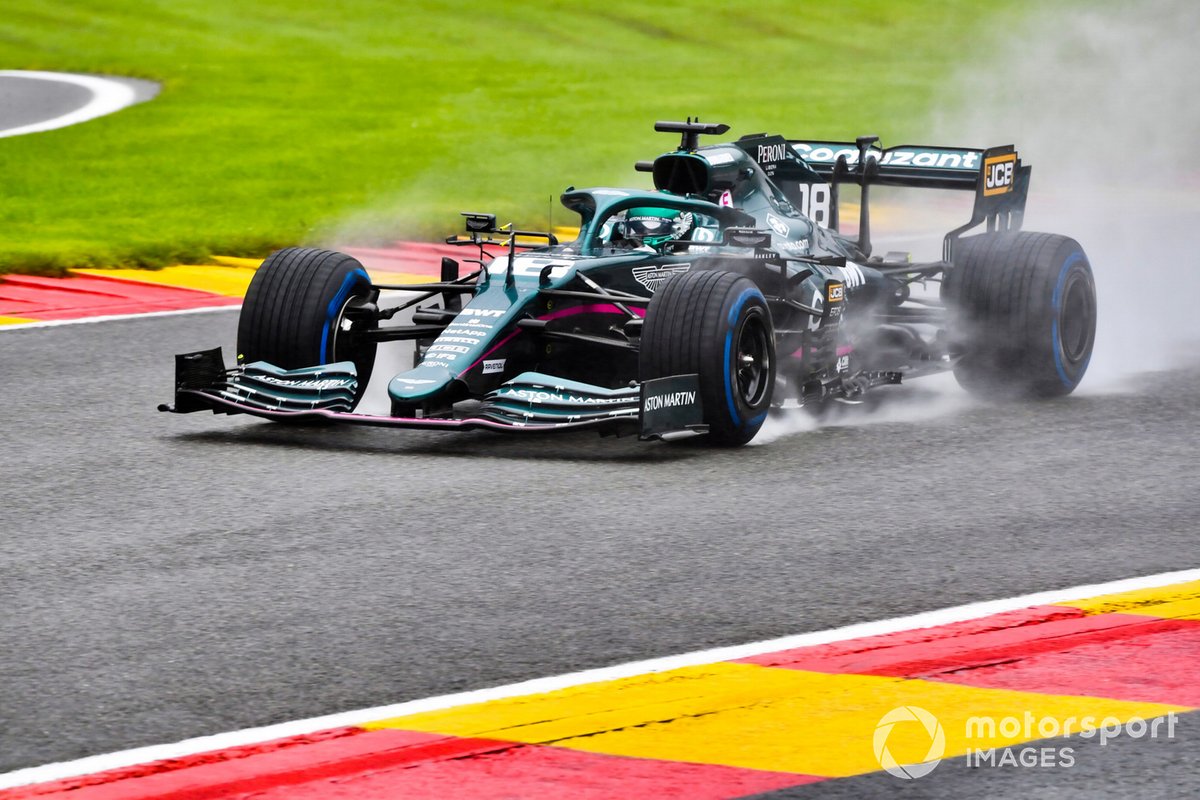 The low-downforce rear wing deployed by Aston Martin is a simplistic approach that utilises a smaller top flap and mainplane, whilst a Gurney is applied to the trailing edge of the top flap to help with balance. 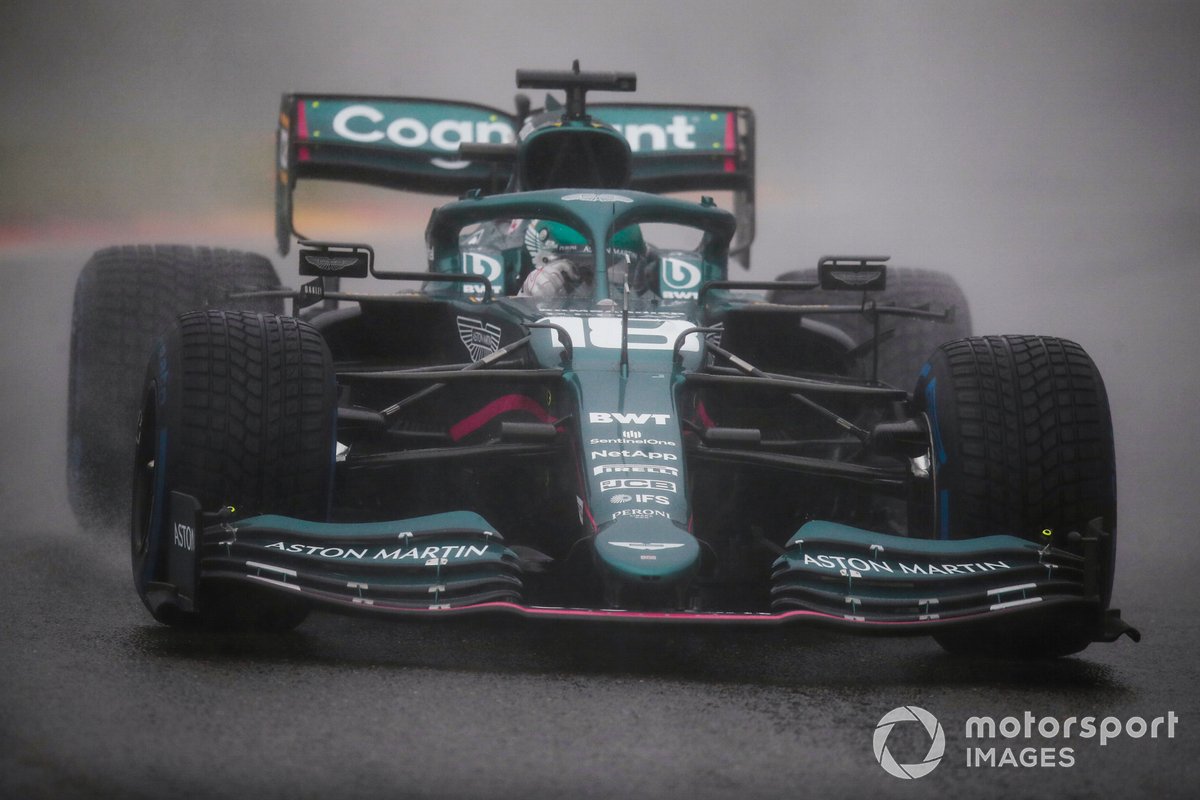 The team switched Lance Stroll to the higher downforce, spoon-shaped rear wing whilst the cars waited to start the race in the pitlane.

Starting down in 18th place, it received a 10-second penalty for breaking parc ferme conditions but, had racing got underway, it could have helped the Canadian move up through the pack. 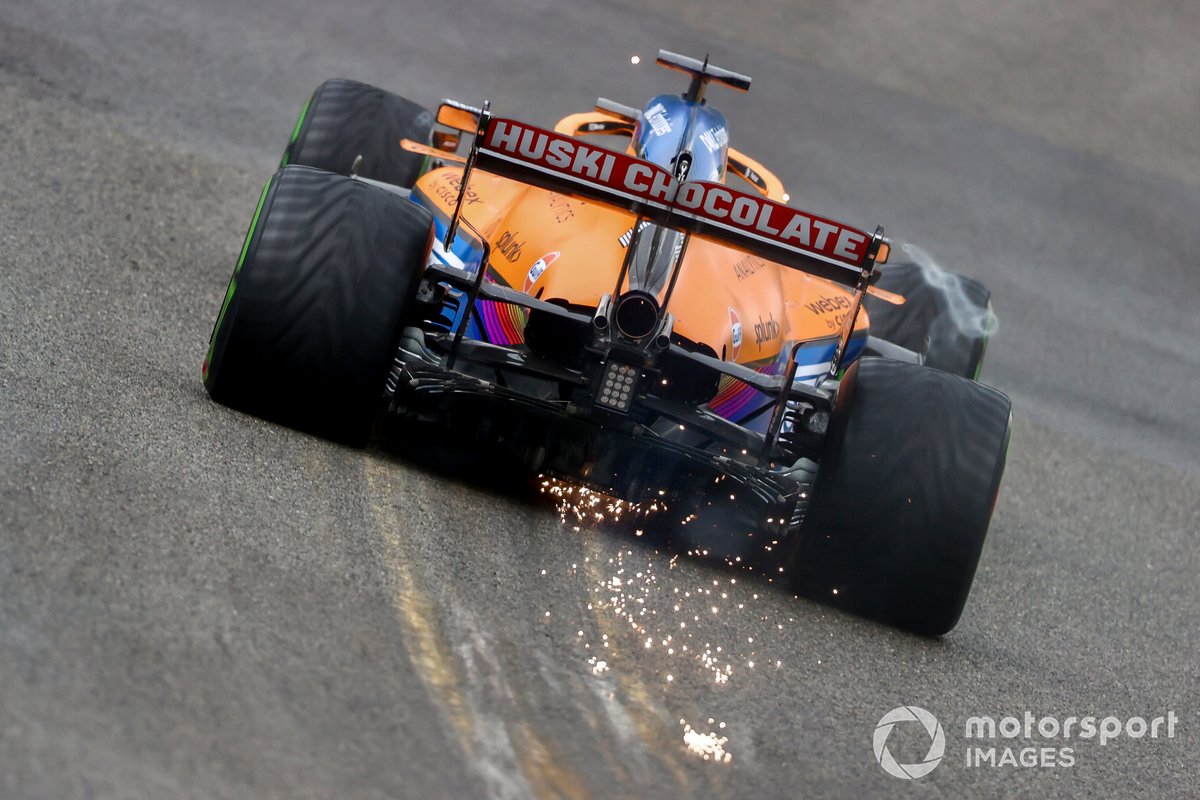 McLaren deployed a low-downforce rear wing it used in the past and this shot perfectly captures the wing tip vortex. 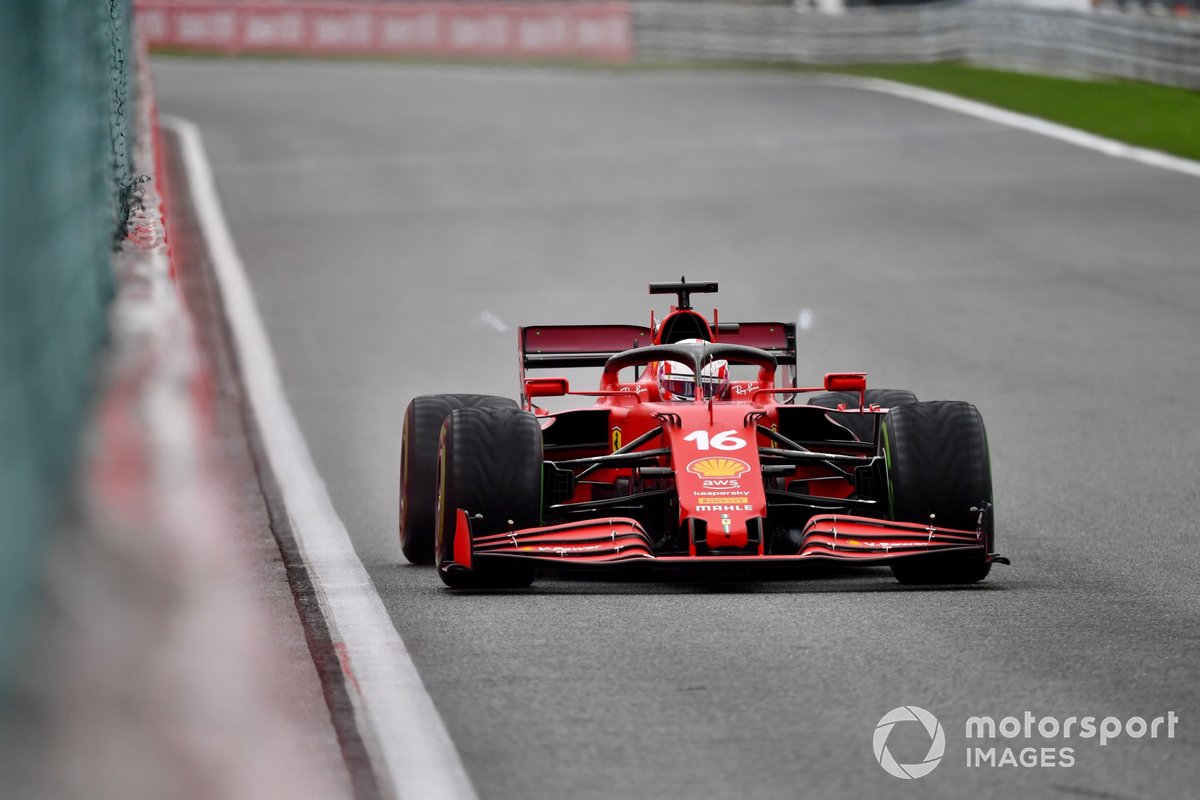 We can see the vortices boiling off the wing tips in this shot of the Ferrari SF21, which was running in a relatively high downforce arrangement. 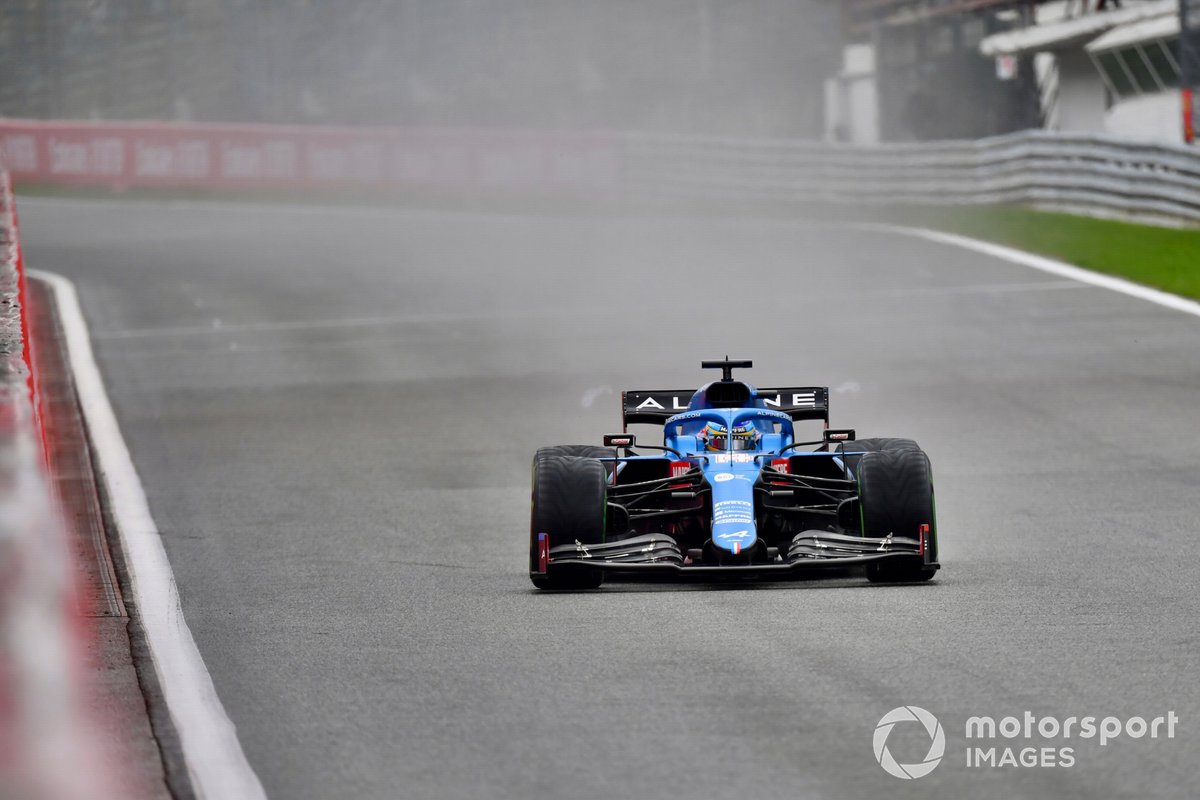 Alpine set up with a lower downforce rear wing that featured a gentle spoon-shaped curvature to it. We can see the vortices pouring off the A521's rear wing here as Fernando Alonso approaches. 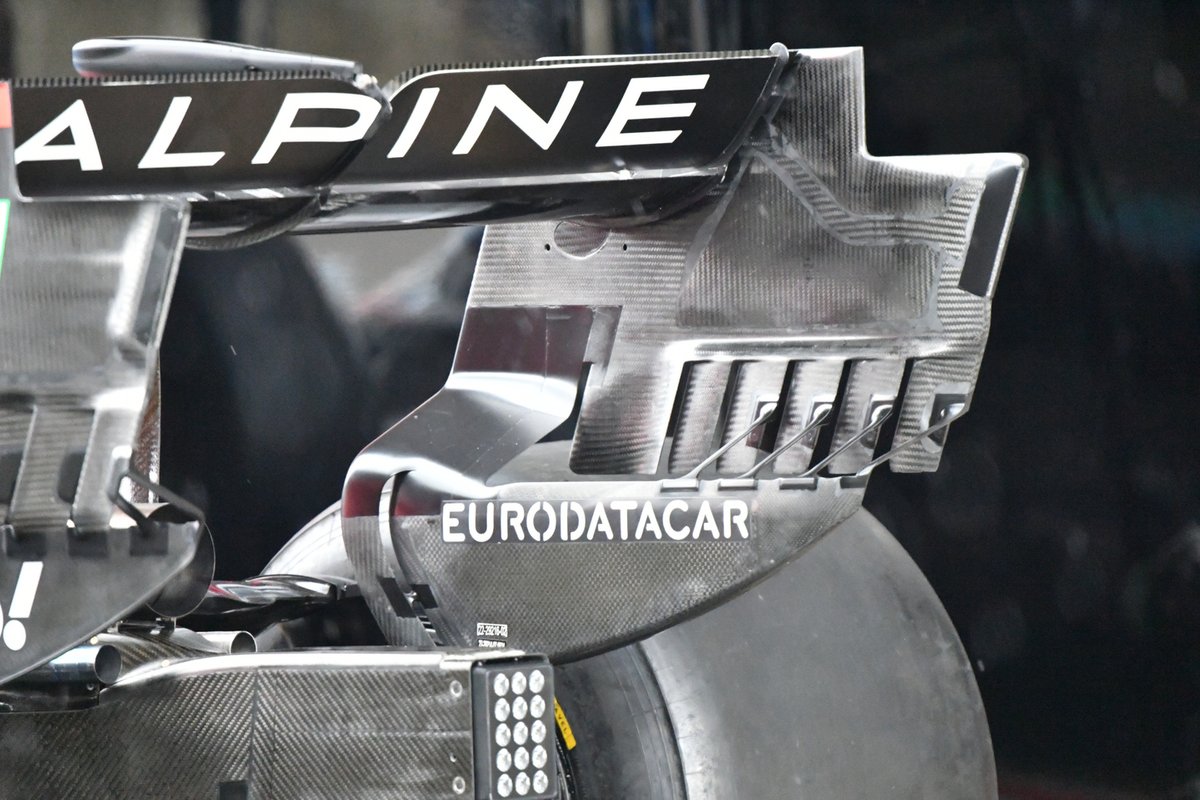 Alpine has recently added these additional spars to its rear wing endplate in order to maintain rigidity. 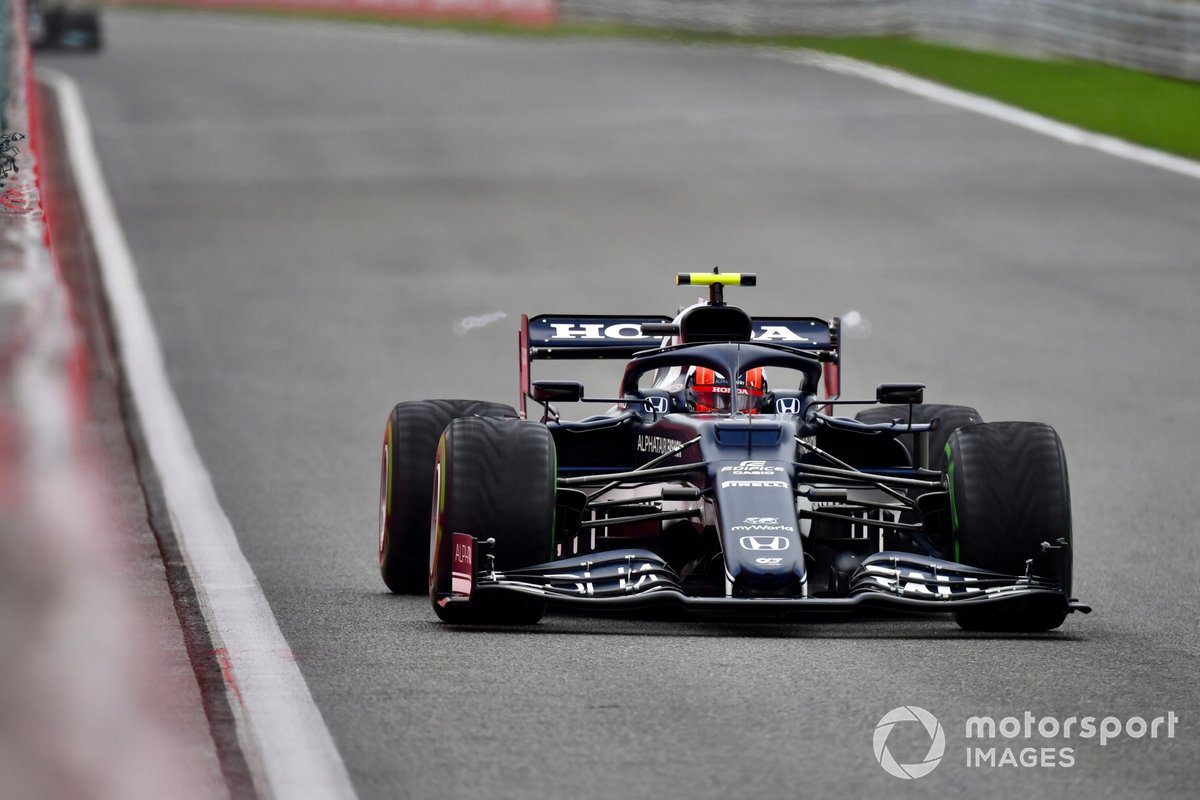 AlphaTauri's low-downforce wing not only features a much smaller box region, but the team also uses cutouts in the upper flap at the endplate end to alter the tip vortex, which we can see here. 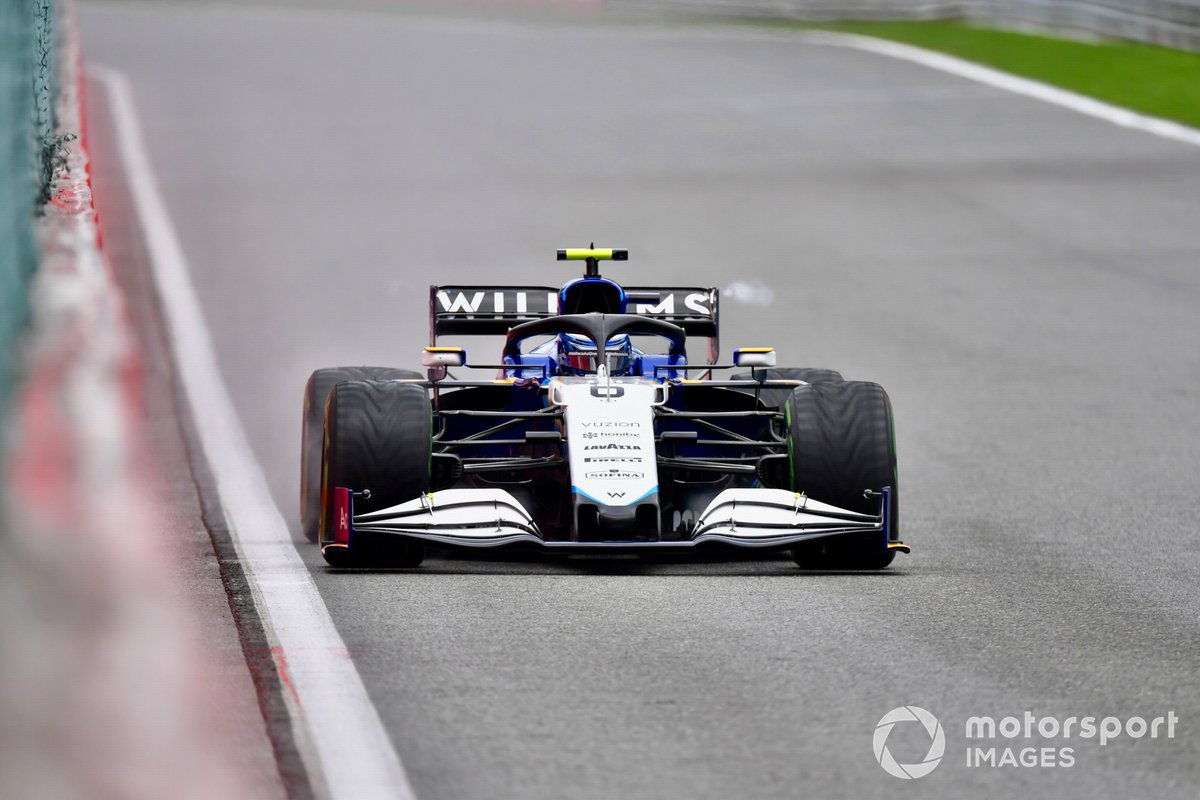 Williams opted for a relatively high-downforce rear wing when compared with some of its rivals, which offered it better performance in sector 2 but might have left it vulnerable on the straights had the racing got underway on Sunday. 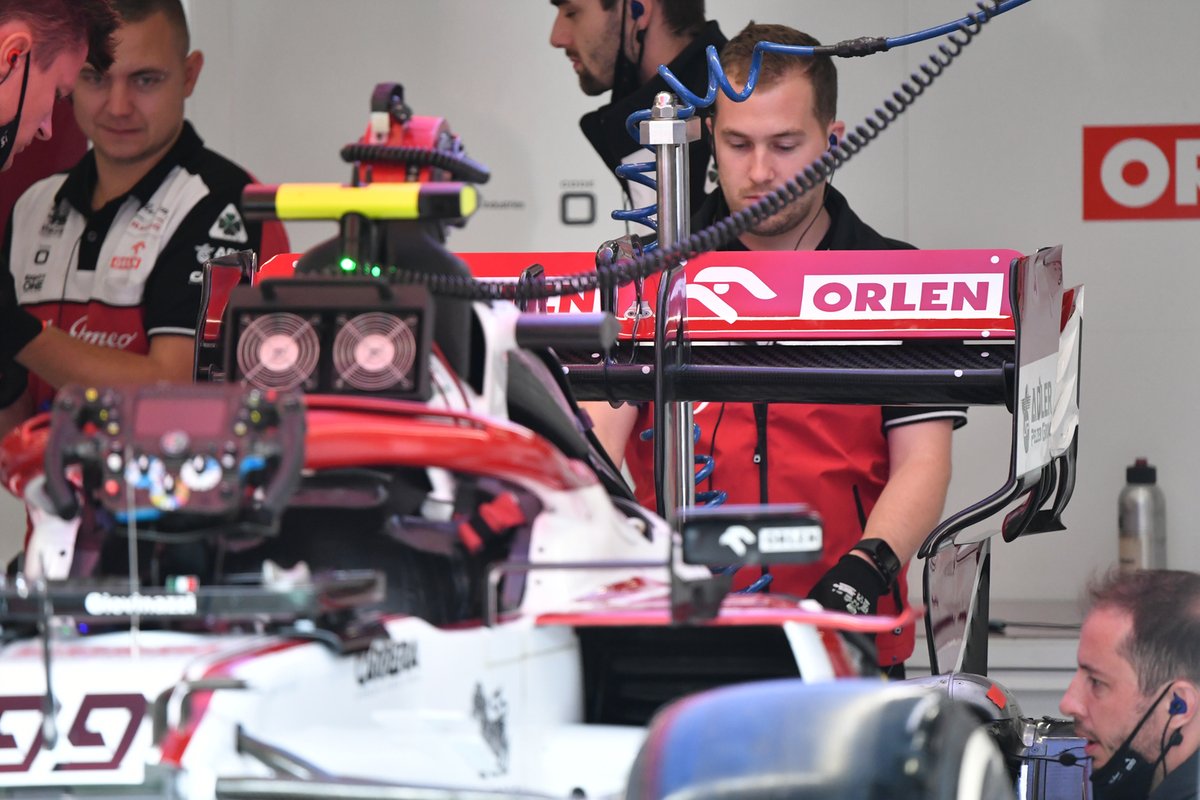 Alfa Romeo also opted for more wing angle than some of those ahead of it, and had to take things further still before qualifying as it added a Gurney on the trailing edge of the wing that wasn't present initially. 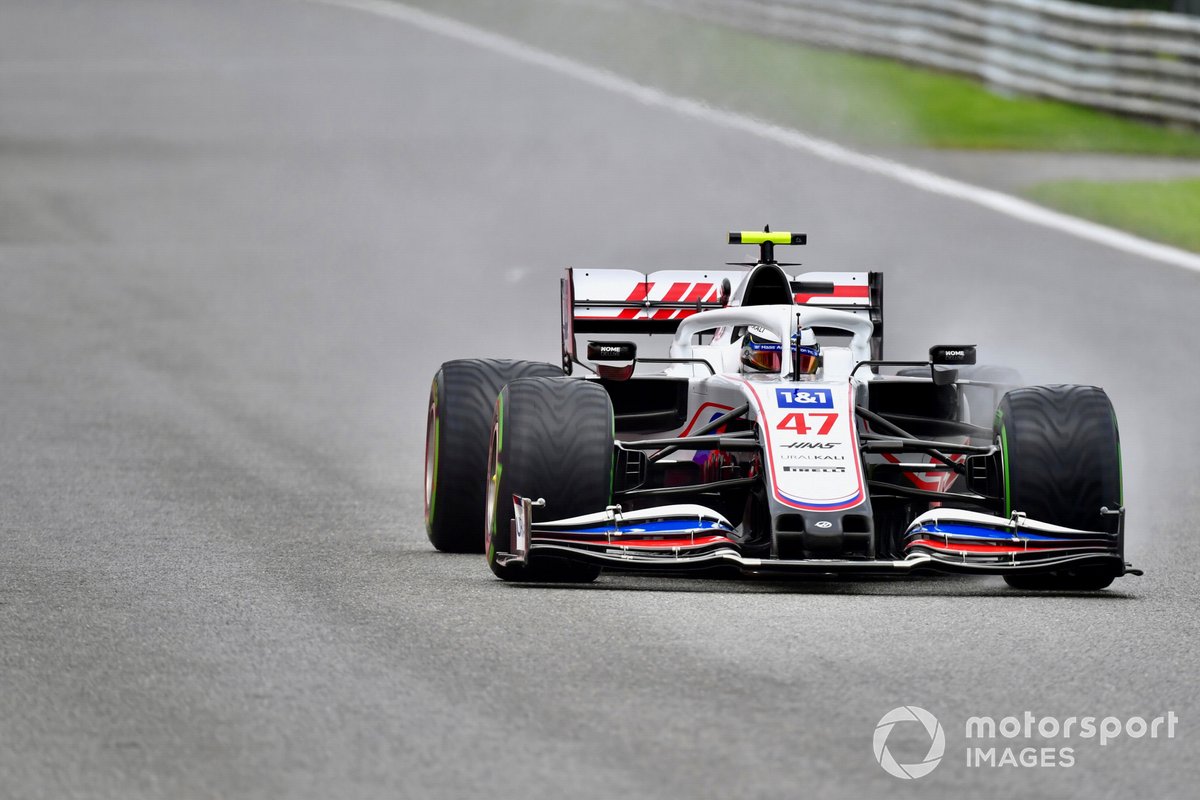 Haas had the highest downforce level rear wing on the grid as it looked to keep its car stable in sector 2. However, it obviously paid the price for this in sectors 1 and 3.