How revitalised Vettel redeemed himself in Monaco

It's not been an easy start to the 2021 season for Sebastian Vettel and his Aston Martin Formula 1 team, with the results not coming and rivals scoring well. However, in Monaco the German bounced back in style.

Having qualified eighth, Vettel crossed the line in fifth, both numbers marking his best performances of the season to date.

In the race, he was helped to the tune of two places by the non-start of Charles Leclerc and the retirement of Valtteri Bottas, but even seventh would have been a good reward.

Perhaps more important than the stats was the way he turned on the speed when he needed a couple of quick laps before his stop, and his bold approach to a game of chicken as he raced Pierre Gasly up the hill after exiting the pits.

It was a charging performance that reminded people that Vettel hasn't forgotten how to drive after seemingly losing his way in his latter days at Ferrari, and it went some way to addressing the sceptics after he failed to better 13th place in the first four races of this year.

A Monaco winner in 2011 and 2017, Vettel felt comfortable in the car from the start of practice on Thursday, taking eighth and 10th in the two sessions. Significantly he was ahead of team mate Lance Stroll, who has usually had the upper hand this year.

He was helped by the latest package of floor updates on the AMR1, fast tracked for Monaco as the Silverstone outfit continues to find the downforce lost to the winter rule changes.

Come qualifying he only just made it out of Q1 in 15th after gambling on using only one set of tyres. He then took ninth in Q2 before going one better in Q3 to earn eighth on the grid – putting himself right behind the troubled Lewis Hamilton.

It was only the second time this year that the four-time World Champion has progressed to Q3, after he started 10th in Portugal earlier this month.

"It was tight in Q1, we only used one set so that was a bit risky," he said after the session.

"But we had two sets of tyres in the end, which didn't help us because there was a red flag. Overall I think it was a good day for us. We've had now five qualifyings and it's always been right on the cusp, so it's tight.

"Here we were a bit more clear than other places in Q2, but overall it's always fighting for 10th, up and down.

"I had a good feeling already in practice around here. Ultimately eighth is not pole position, but it's a lot better than the last races, so we've got to take it and we aim for some points tomorrow, we see what the race brings." 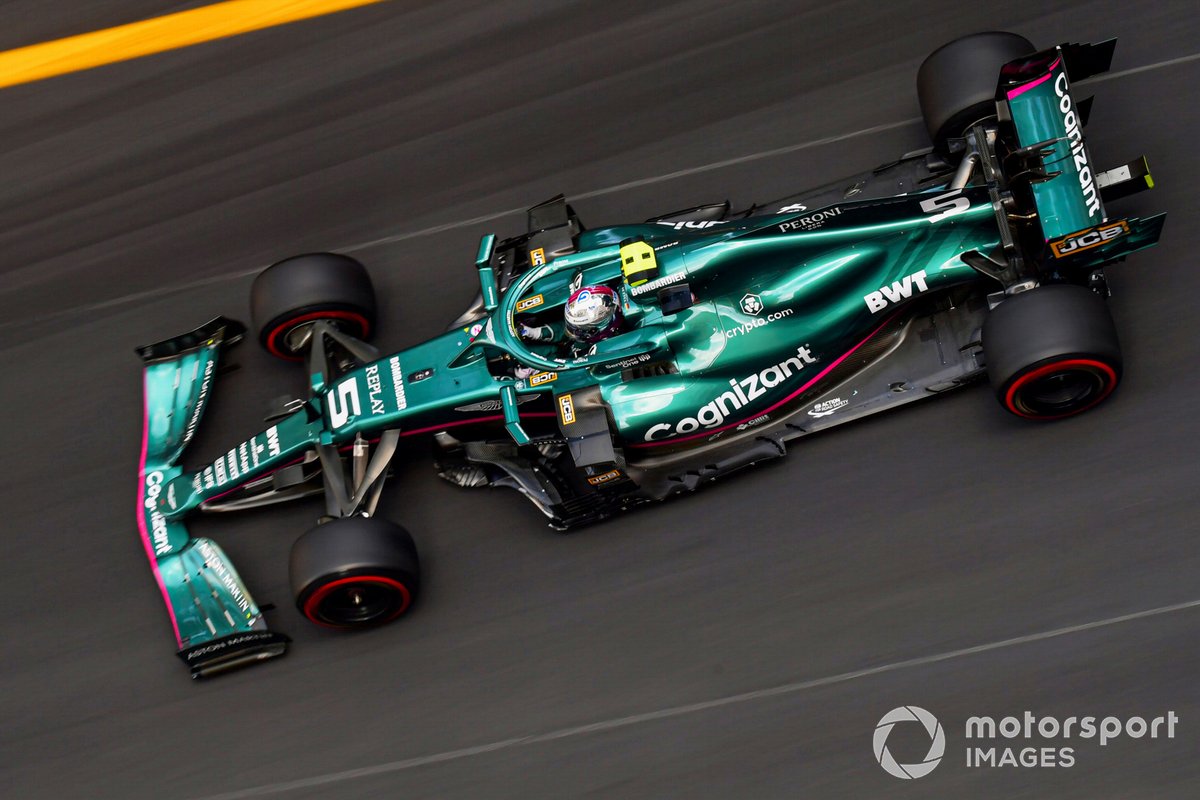 Leclerc's absence from the grid meant that Vettel was promoted to seventh at the start. In the opening stint he ran behind Gasly and Hamilton, and ahead of Sergio Perez. The Mercedes driver was the first to stop on lap 29, followed by the AlphaTauri man a lap after that.

With a clear track ahead and some life left in his soft tyres, Vettel pumped in a couple of quick laps, while his two rivals got up to speed on their hards.

"I enjoyed it, because that's the time when it when it matters," he explained. "The first 10 laps were quite boring, just Sergio pushed in the beginning, but no threat really. And then he backed off to save his tyres, and I knew that those laps before the pits, they will be the crucial ones, and they turned out to be.

"So I just enjoyed the fact that I was on top of the car and could push when I had to, and knew how the car will respond."

When he came in on lap 31 it became a race out of the pitlane. He'd done enough to safely jump Hamilton, but as he headed down to Ste Devote, he could see Gasly.

Turning into the pit exit lane and heading up the hill they almost touched. In the end it was the AlphaTauri driver who had to give best and back off, allowing Vettel to slot in front.

"I knew it will be close," said Vettel. "But that close, it's always difficult to foresee. I always had a bit of the nose ahead, and I could see him. But not enough really to tell how much I was ahead, because he was nearly side-by-side, it was only a quarter of a car to half the car. And then it starts to go left/right.

"I guess he didn't know if I saw him, so at some point he backed out of it. I gave him room, but I had fresh tyres. I went through the pick-up as well, so not the most comfortable route up to the Casino!"

A very different strategy, involving a long opening stint on the hard tyres, promoted Stroll from 13th on the grid to eighth. Aston bagged 14 points and jumped from seventh to fifth in the championship table.

"Well, obviously it was good I think for all of us," said Vettel. "We had the right calls from the pits today, and also the pace, that helps if you can stay out and just have that extra pace for two more laps, three more laps. 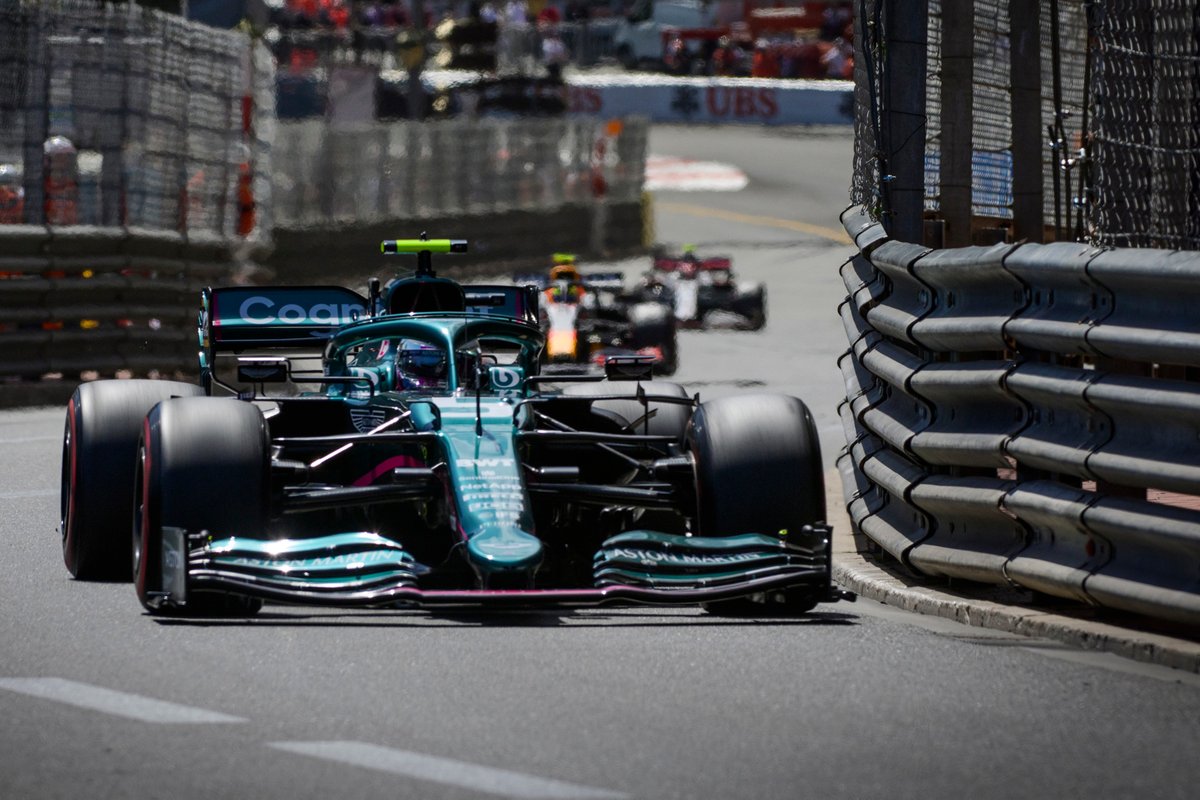 "I felt really good on the soft, I was just cruising in the beginning, and letting the cars go in the front, and then slowly closing the gap. I thought we might have a chance as well to keep Sergio behind with that pace that we had, but he had another second from there, and then it was not possible.

"But other than that, obviously we got Lewis and Pierre, so that was great for us today."

It's not been an easy transition to Aston Martin for Vettel, and after a disappointing final season at Ferrari, he's taken a lot of stick.

However, he was more concerned about giving a boost to a team that has had a tough start to the year under its new name than for his own reputation.

"I'm happy for the team, I think after such a strong season last year and then the disappointing start in many ways this year, I think it's what we needed, and the guys deserve. Also, it's a good signal to all the factory at home. There's a lot of things happening.

"But hopefully this result helps us to just keep the spirit high, which it is, and maybe pick up a bit of momentum to have stronger races."

Vettel is naturally keen for his team can continue to extract more performance out of the car, and thus give him further chances to fight like he did on Sunday.

"Obviously, it's very tight in the midfield, and if we can find that extra tenth or two, no matter where, it can make a huge difference, because it might be enough to get you into Q3, it might be enough in the race to stay out that one lap, or to go for the undercut and make it work, and so on.

"So in the end if you look at the weekend, it's probably only five minutes that really matter, it's the qualifying laps and then the crucial laps in the race. But you need to have everything working your way in such a tight field as it is."

When Mercedes "screwed up" Hamilton's race in Monaco