How Ferrari's and Mercedes' most dominant F1 cars compare

Formula 1 returns to the Nurburgring this weekend for the first time since 2013 – with records again set to tumble.

You have to go back to 2004, though, to discover the fastest F1 lap we have seen around the current configuration. That was in Q1 for qualifying that year when Takuma Sato delivered a 1m27.691s in his BAR-Honda.

Current team predictions, based on the various simulations they have run, vary from a time very close to Sato's record all the way to F1's 2020 machinery being up to two-seconds per lap faster. 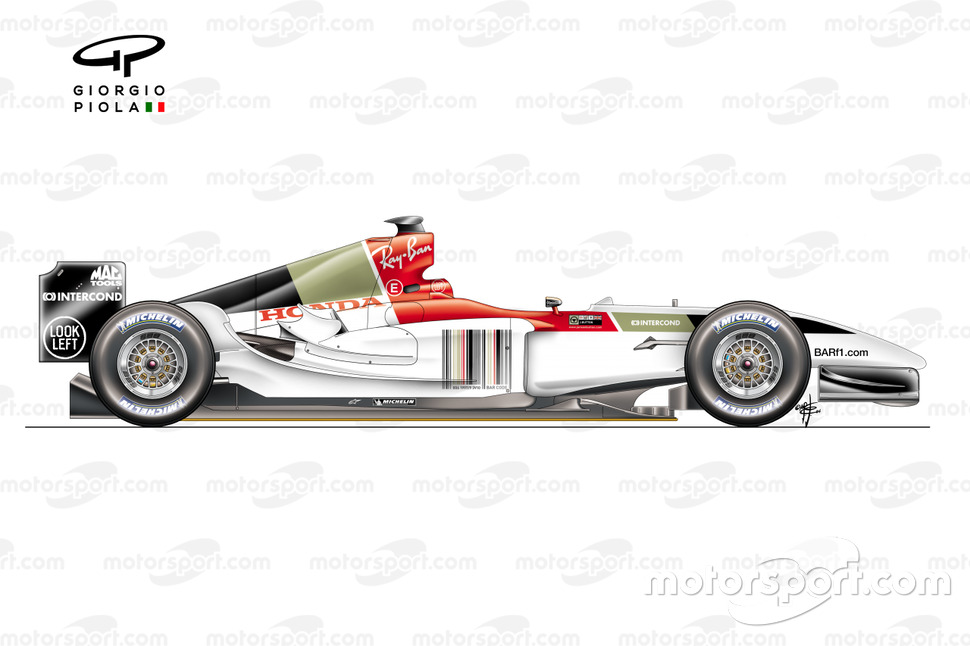 The comparisons between the two years give us a fascinating opportunity to look at how, despite what may be similar lap times, the machinery has changed completely.

So how does the most dominant driver and car combination of 2020, which is Lewis Hamilton in a Mercedes, compare to the leading package back then of Michael Schumacher and Ferrari? 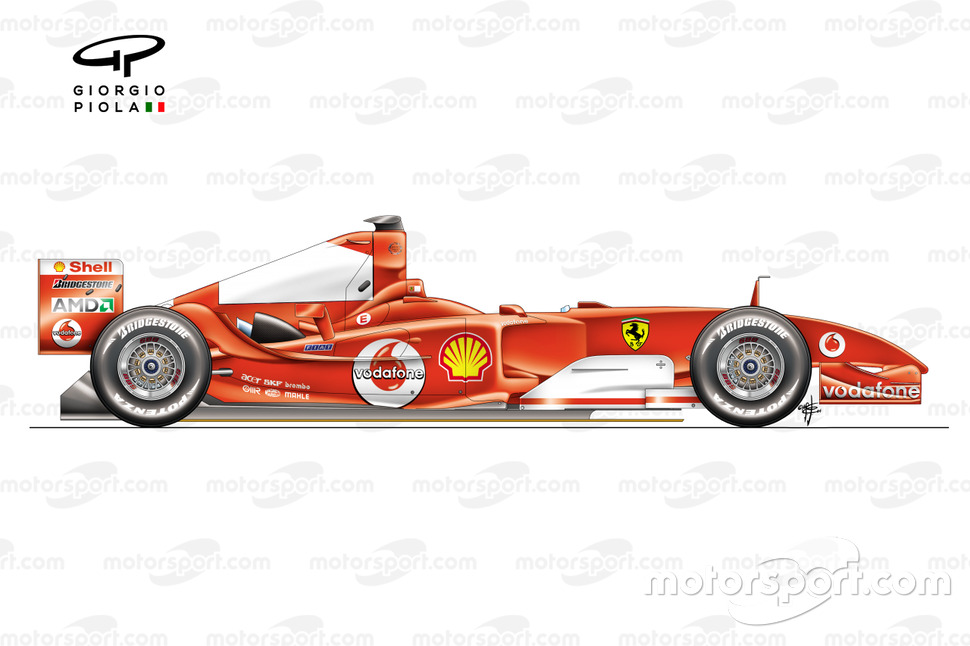 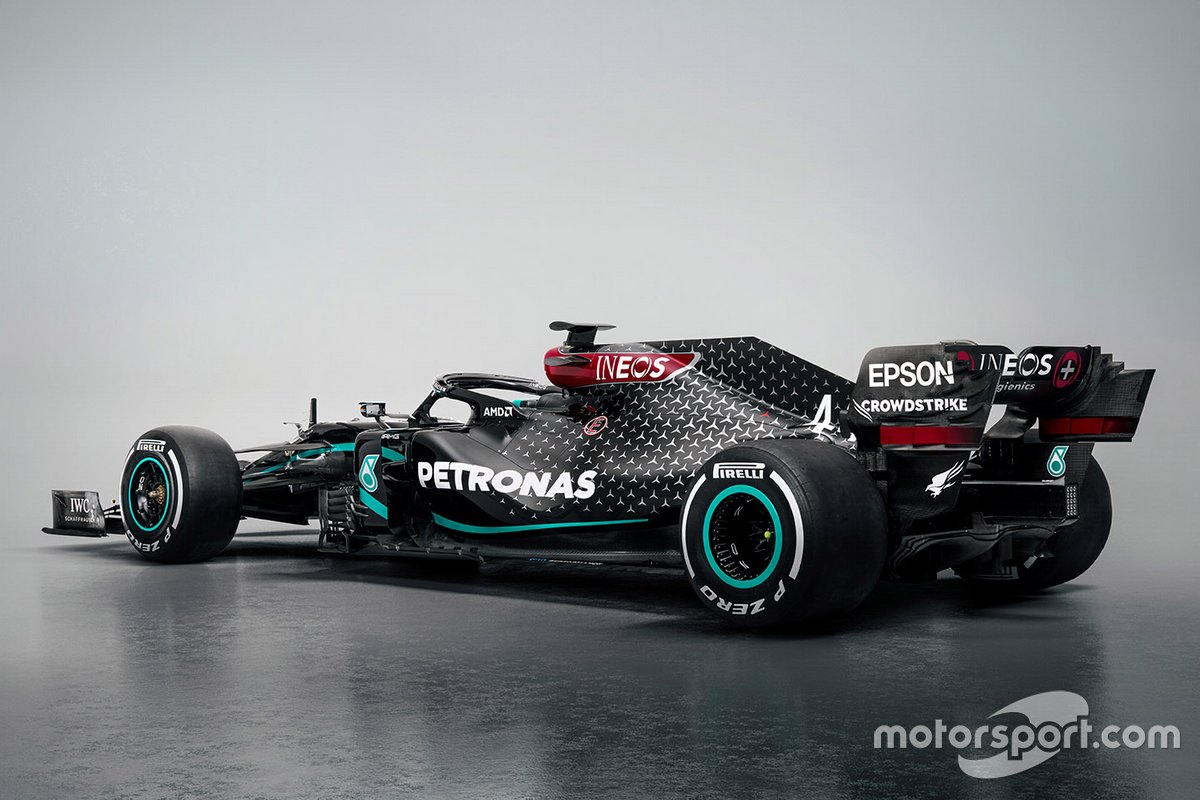 The F2004 was designed to be a qualifying car that did very short runs with frequent pit stops to refuel, meaning it had to be driven close to the limit at all times.

This meant the Ferrari was extremely compact when compared with the limousine-like machines of today. The F2004 is approximately 700mm shorter in terms of wheelbase and more than 1.2 metres shorter overall than the W11.

The cars are now wider too, measuring in at two-metres, rather than 1800mm as was the case for the F2004.

Changes to the rules have dictated some of these dimensions, with the designers required to accommodate more robust safety structures and the styling cues introduced in 2017.

But, even accounting for decisions like these being taken out of the designers hands, they have still favoured longer cars in order to improve aerodynamic performance.

There's also a significant difference when it comes to weight too, as the W11 is dragging around 745kg whilst the F2004 weighed in at 605kg.

Some of this weight is as a consequence of the safety structures, such as the halo, but most of it can be accounted for by the difference in weight between the V6 turbocharged engine and its hybrid components to that of the V10 engine. 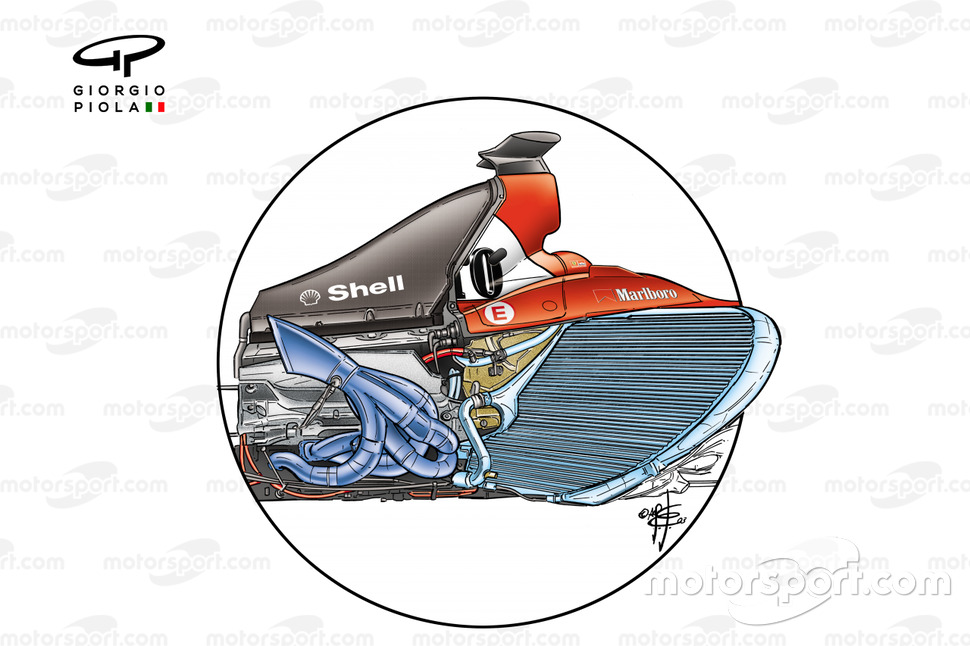 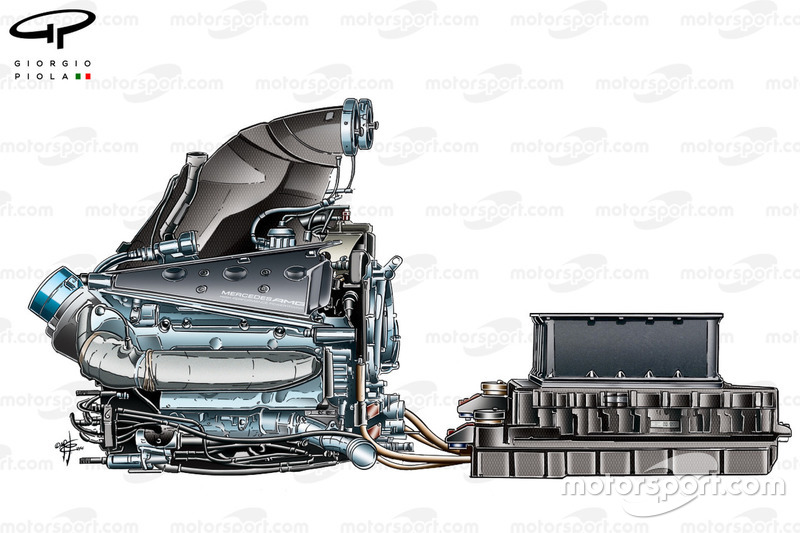 However, whilst it might seem odd that the weight has gone up so dramatically, we must also remember that the current generation of power unit is capable of doing over 6000km and has around 1000 bhp, whilst the V10 would last around 800km and had 100bhp less too.

Efficiency is up dramatically too. The V6 turbo hybrid is extremely frugal in its fuel consumption, with a maximum 110kg allowed for a race. But more often than not, the limit isn't used, whilst the F2004 needed around 180kg of fuel to complete a race distance. 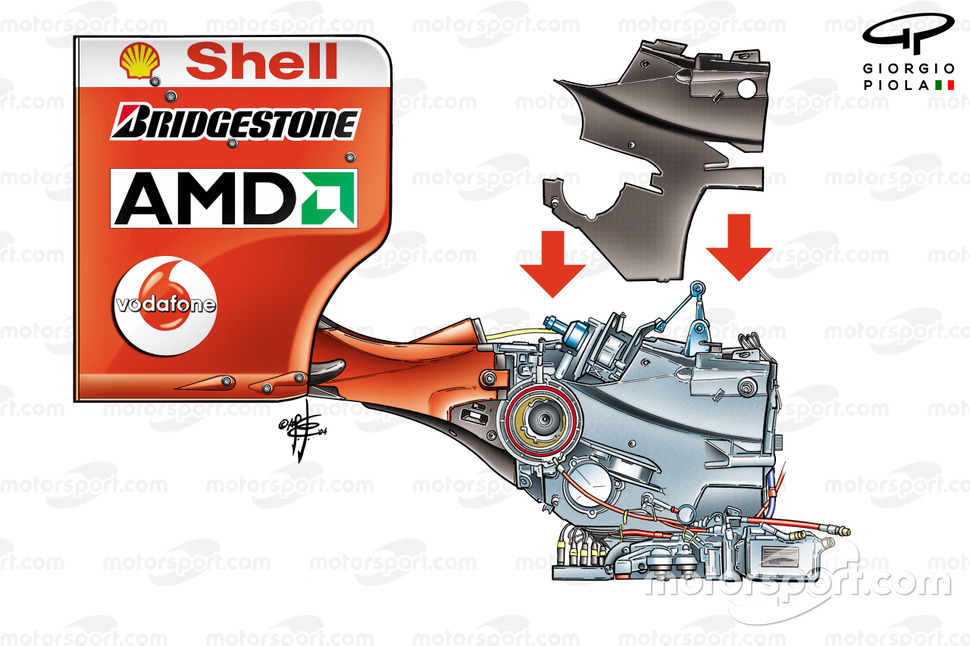 The F2004 introduced a gearbox concept that utilised a titanium casing with a carbon skin, a feature that's now almost universally interwoven with the DNA of the designs seen today.

The now eight speed gearboxes generally feature a cassette-style design that allows it to be slotted within the casing, in order that if damage were to occur they can still complete seven grands prix without fear of picking up a grid penalty for having to change a gearbox. No such restraints existed in 2004 though and the gearbox, like the engine, merely had to last a race weekend.

The FIA had just banned pre-programmed downshifts controlled from a button in 2004 too, a feature that had meant drivers had to use the paddle shift on the steering wheel.

Launch control, which had become a feature, was also banned by the FIA meaning the driver had less software assistance off the one. However, in 2004, drivers still had more than the current drivers have, who have to manually find the bite point and release the clutch. 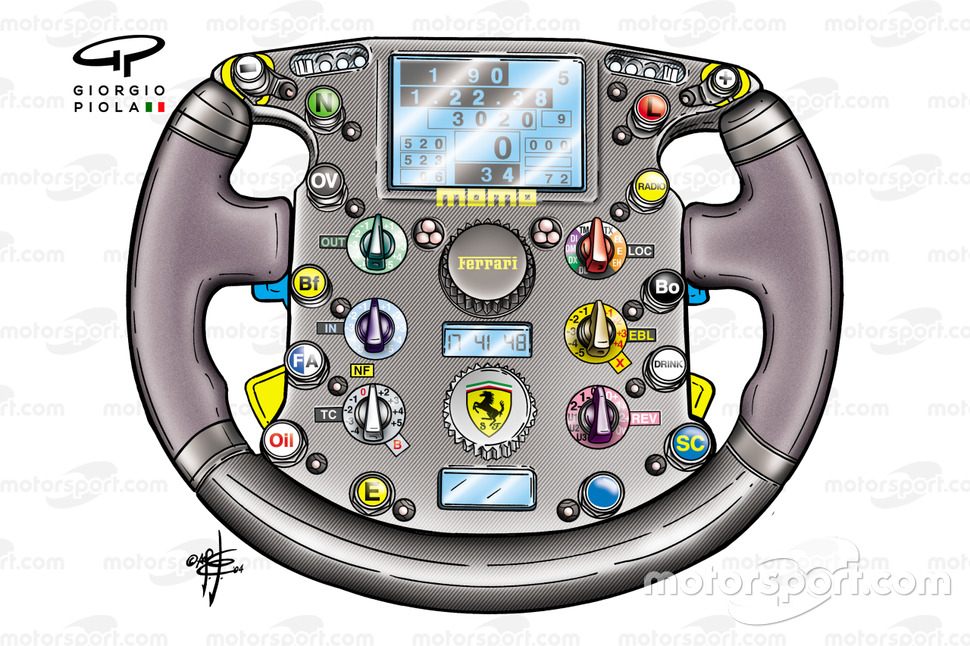 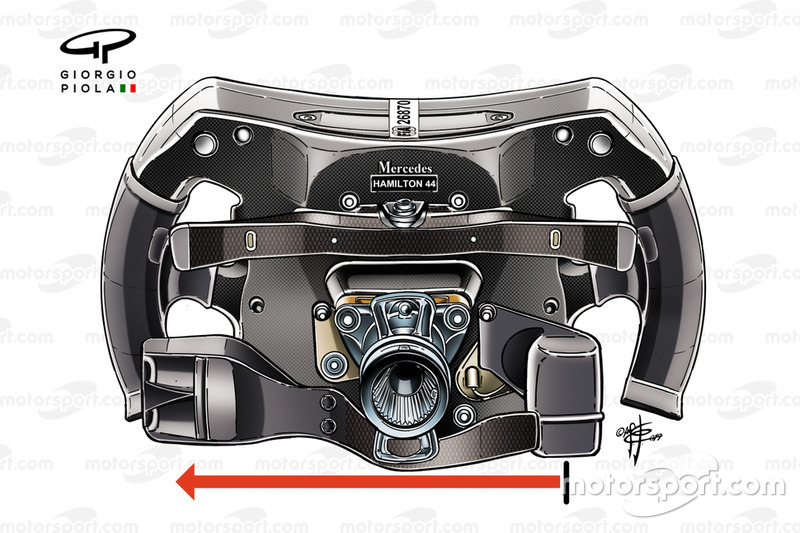 The F2004 was shod with grooved Bridgestone tyres that year, although Michelin also supplied some of their competitors too, which forced the two manufacturers to compete with one another for superiority.

Bridgestone also supplied Ferrari with its own specific compounds at each track, giving them a competitive advantage over the other teams supplied by the Japanese manufacturer.

In comparison we now have a single supplier who gives all the teams the same three compounds during a race weekend. For 2020, Pirelli has also taken control of the allocations too, giving every team the same tyre choice, whereas previously this was decided upon by the teams and drivers themselves.

As you can see, the F2004 and W11 designs could not be more dissimilar to one another, with each taking the technology and regulations of the time to the maximum.

But, with Sato's track record already etched in history, it will be interesting to see if the current batch of cars are quicker this weekend, especially as the weather could yet play its part too.

What is behind Verstappen’s recurrent F1 DRS problems

Five interesting Spanish GP F1 updates you may have missed