Formula 1's winter rule changes to slash downforce proved to be a big headache for teams over the winter – and became a big talking point in Bahrain last weekend.

The changes to the floor, brake ducts and diffuser were originally aimed at cutting downforce by 10%, although indications suggest teams have already clawed back half of that.

But of more intrigue in Bahrain was how the floor tweaks in particular had favoured some teams over others, with the low-rake concept cars in particular looking like they have lost more.

It was no wonder then that a lot of the main developments that were unleashed for the first race were focused in the floor area, as teams rapidly act to try to make up for the losses.

Aston Martin, like Mercedes, appears to have been much more aggressive with the design of its floor and the associated aerodynamic appendages, likely tied to its lower rake set-up when compared with the rest of the field.

Aston Martin ramped up its efforts further still for the Bahrain GP, as its introduced an entirely revised package, which includes a change to the width of the floor. 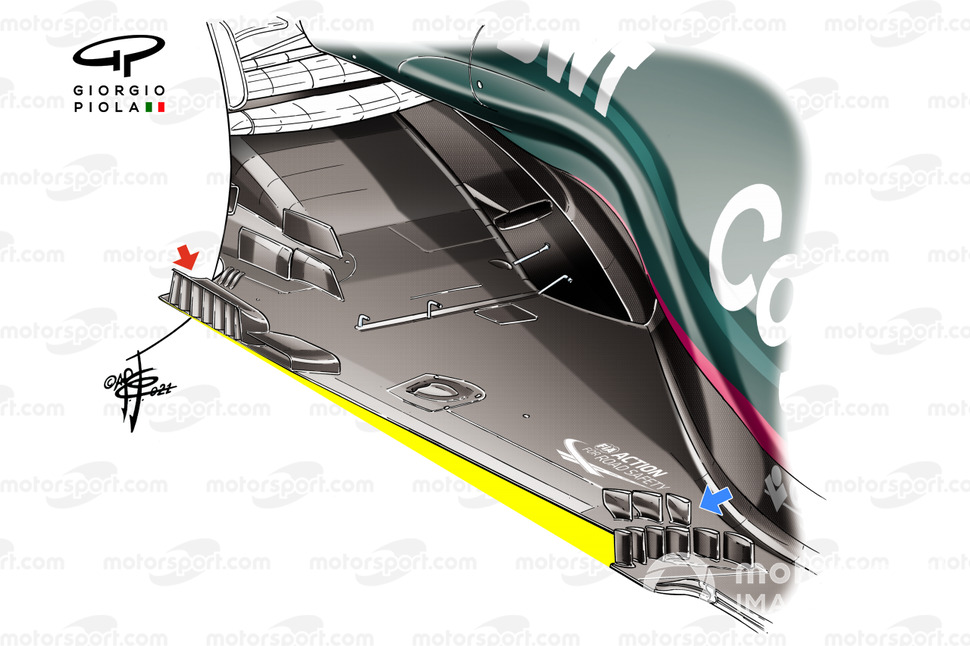 Aston Martin has essentially given up some of the floor that's available to it, opting to have a Z-shaped floor instead of the fully tapered option.

For Aston Martin and the others running a similar solution, the loss in floor space is made up for by the aerodynamic gains that can be leveraged from having a more conventional straight edge to the floor.

Paired to this, the Silverstone-based team added an additional fin in the first cluster of fins, taking its count to six, rather than five and added another trio of fins just behind (blue arrow).

Meanwhile, the cluster of fins that previously resided on the edge of the floor just ahead of the rear tyre have also made way for something more complex (red arrow).

This structure is broken up into two main elements, with the primary structure comprising numerous outwash fins, all housed within a large enclosure, whereas the secondary structure takes on more of a flapped shape and sits lower to the floor. 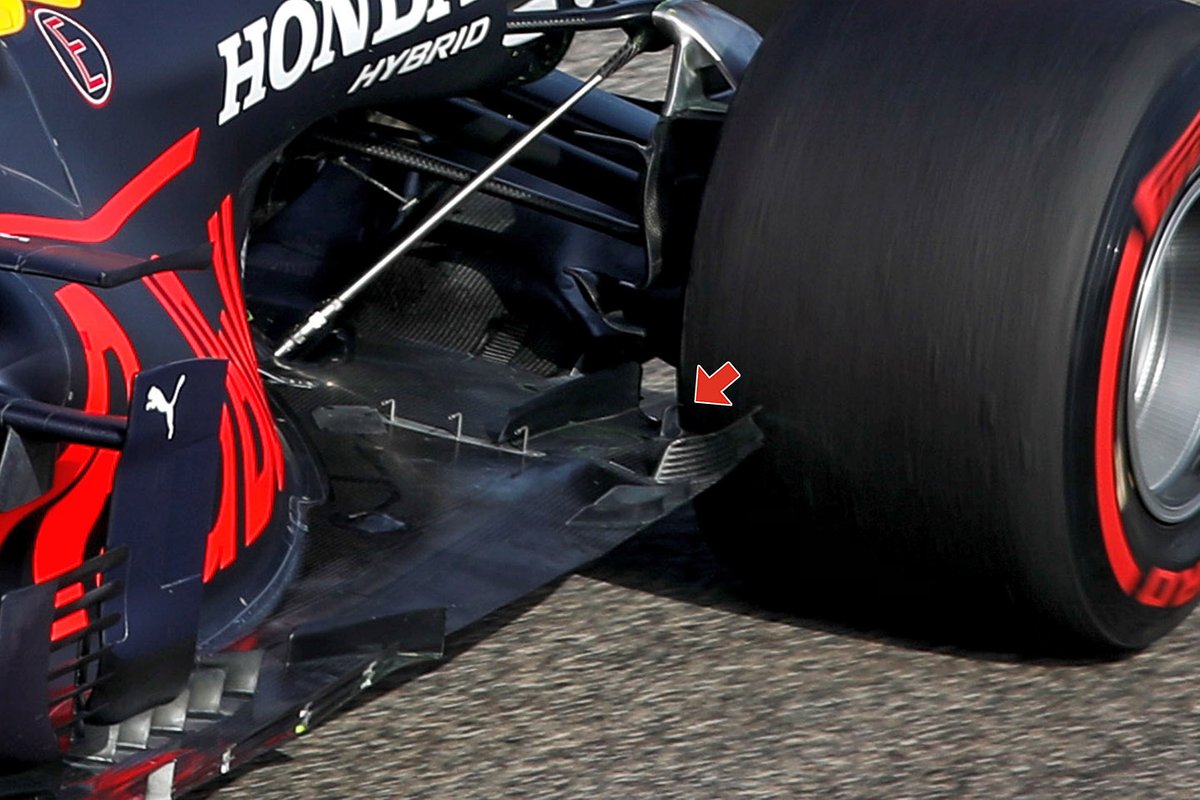 Red Bull had already made some changes to its floor during the pre-season test, adding a fin at the midway point and two shorter, curved outwash fins ahead of the main outboard fin.

However, in Bahrain the team added another curled fin in the central section of the floor as it looked to improve the airflow's transit across and around the tyre and, perhaps more critically, reduce the influence that the turbulence it creates has on the diffuser's performance. 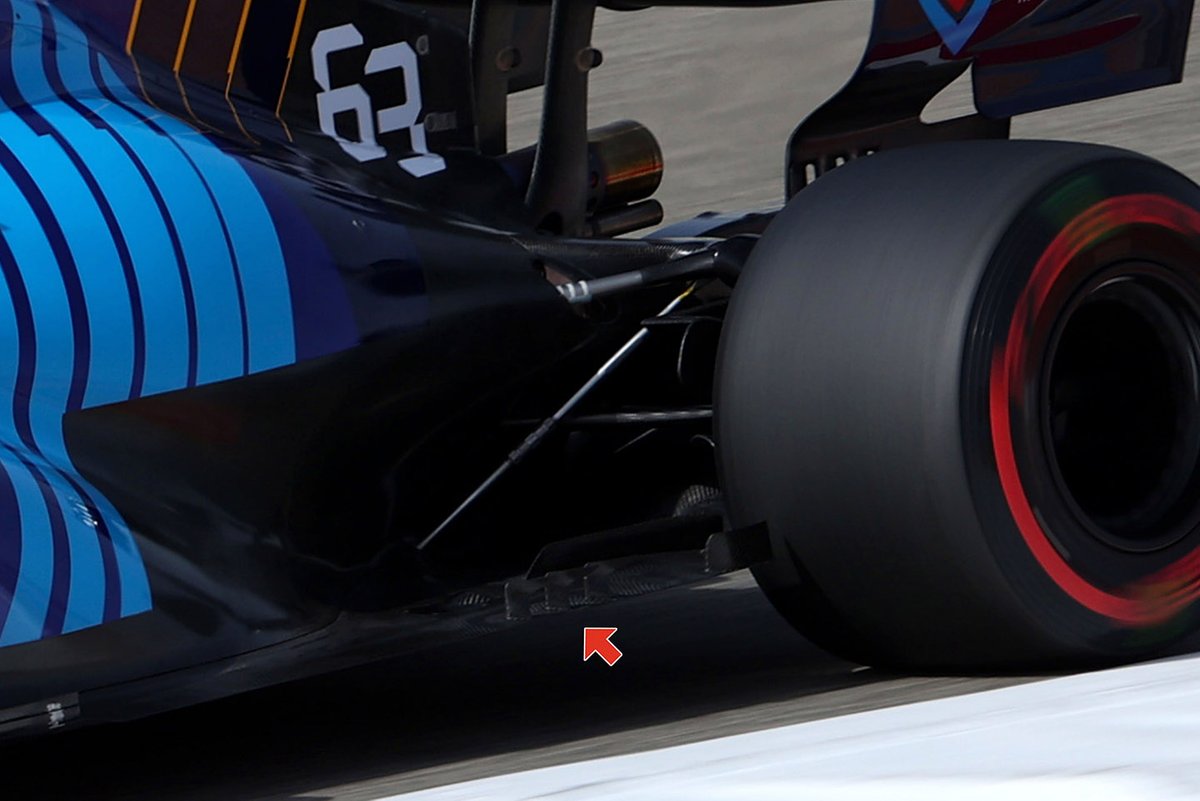 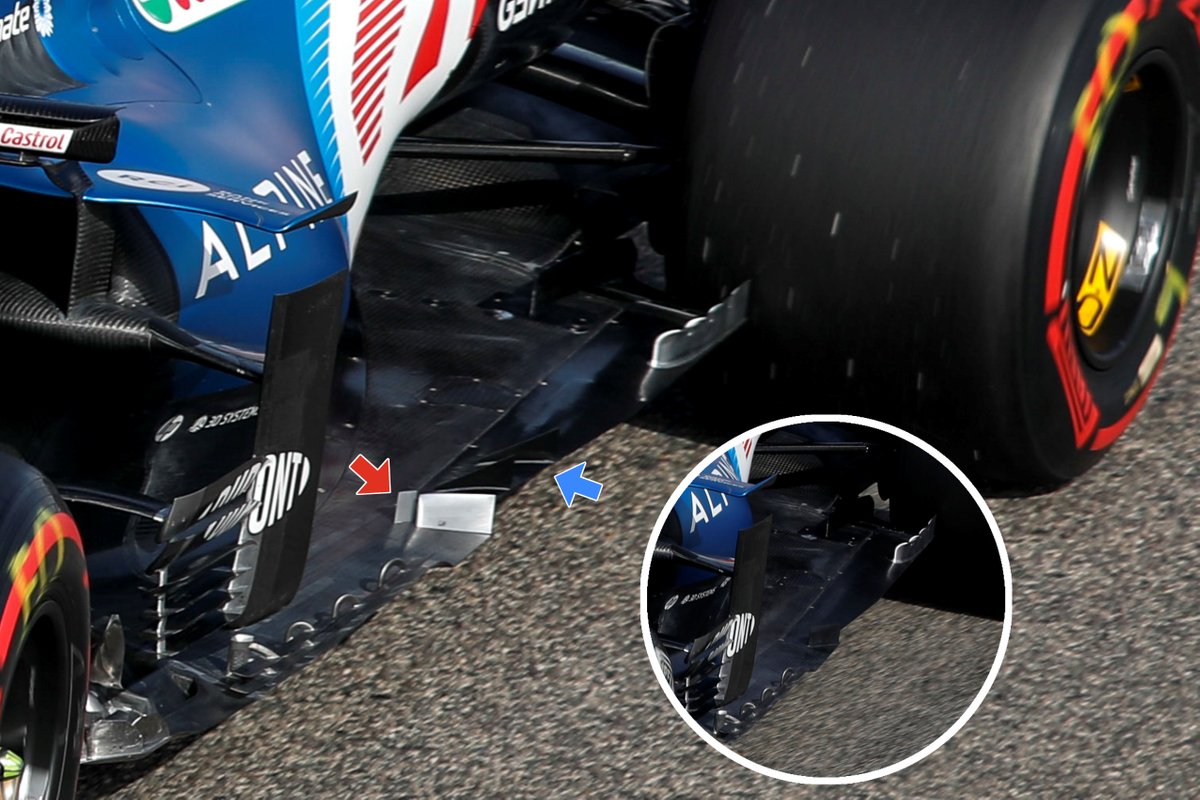 Williams has a more simplistic approach to this region of the car at this stage in the season but did arrive with some new parts for the Bahrain GP, installing a trio of winglets to help drive airflow across and around the rear tyre (red arrow).

Alpine also had several new parts available to them in Bahrain with two new floor configurations amongst those.

The first of these (pictured, right) featured an additional vane midway along the floor (red arrow) and two additional, triangular shaped vanes a little further downstream.

The other floor option tested saw the fins ahead of the rear tyres conjoined with shorter slots in the upper section, rather than the full length ones that are ordinarily used.

But, just like the additional boomerang-like halo fairing seen here on Esteban Ocon's car during free practice (below), none of the parts were raced by Alpine, suggesting it needs more time to understand whether they're offering the expected performance uplift that its simulation tools would suggest. 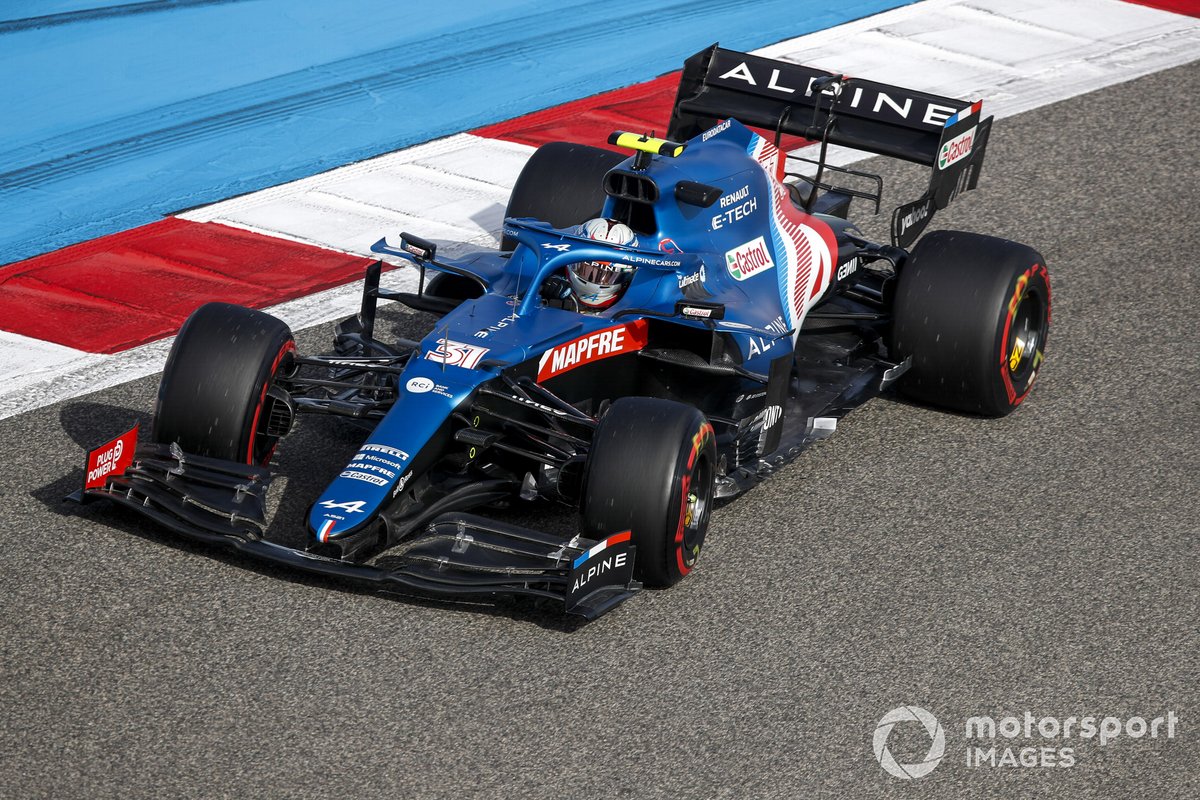 Ferrari didn't have a raft of new parts on offer for the first race but it's still worth another look at a novel solution that was discovered on the SF21 during the pre-season test.

Mounted on the edge of the diffuser are three tall fins that are being used to redirect the airflow and turbulence in that region in order that it doesn't impinge on more important flow structures created to improve the car's overall performance. 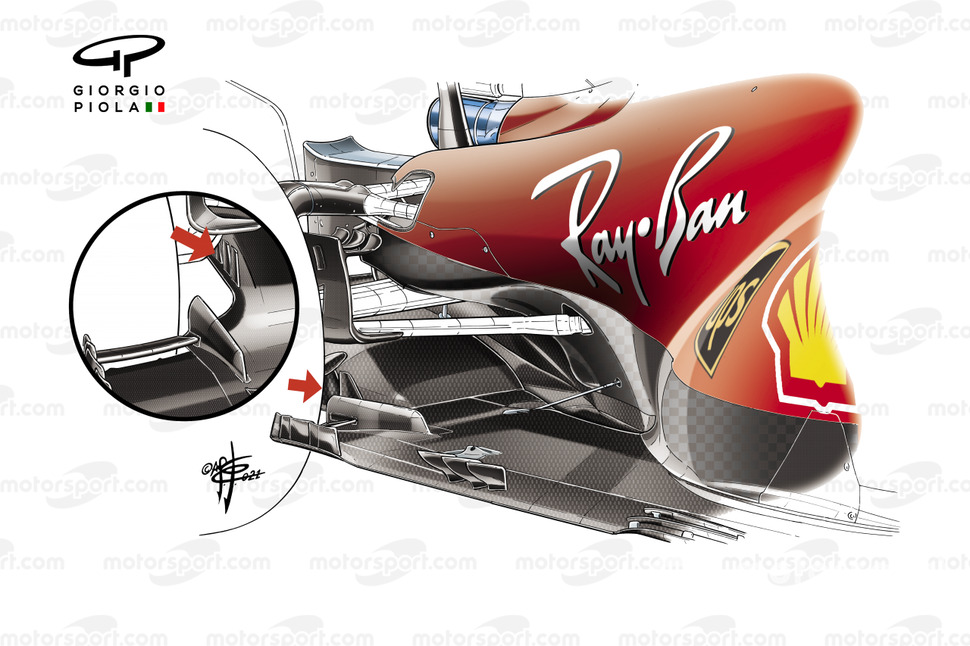 Not all teams focused on floor changes though. Alfa Romeo has opted for a new solution on its front wing this season, as it has added a slot in the footplate which allows the airflow to migrate to the underside of the wing.

But, whilst interesting, it's not a new solution, as Alpha Tauri introduced something similar at the tail end of last season and has continued with it this year. 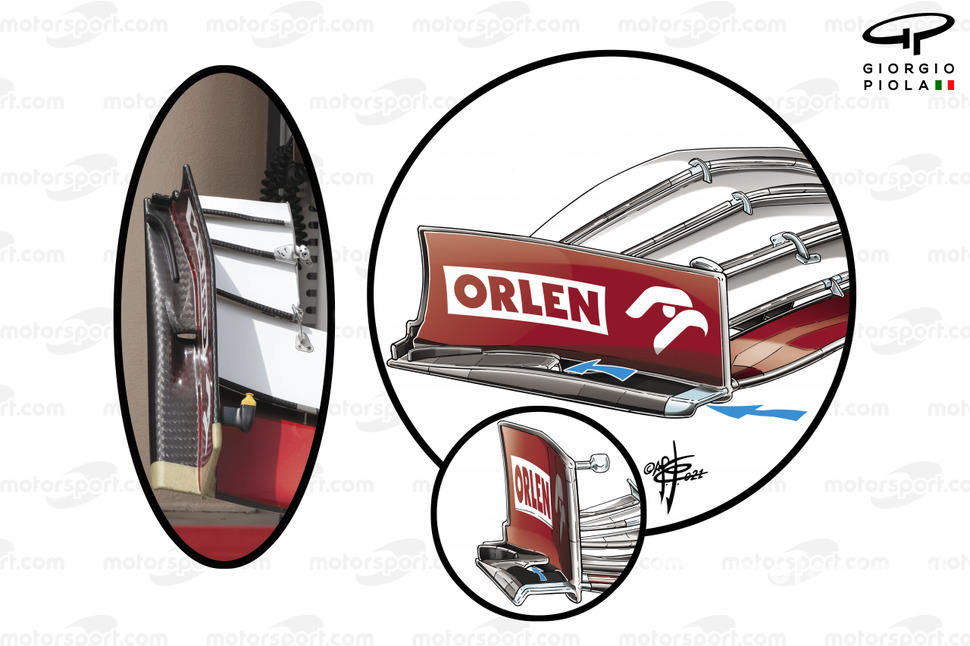 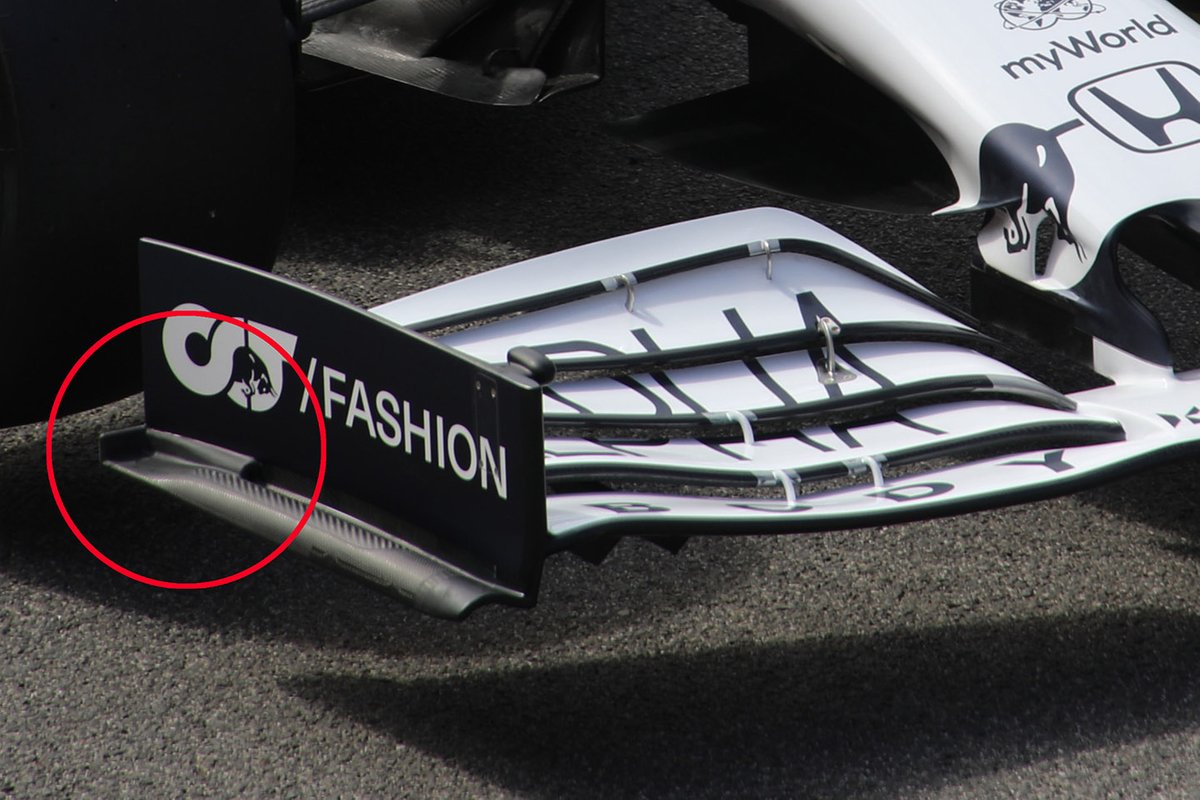 Albeit with different shapes and positions, the solutions appear to be performing very similar roles: encouraging the air to deviate from its normal path across the upper surface of the footplate and influence the airflow it converges with beneath.

The airflow that continues to reach the latter phase of the footplate is shunted outboard by both the triangular strake and the trailing edge Gurney flap, both of which play a role in creating the outwash that the designers are searching for in order to reduce the turbulence created by the tyre behind. 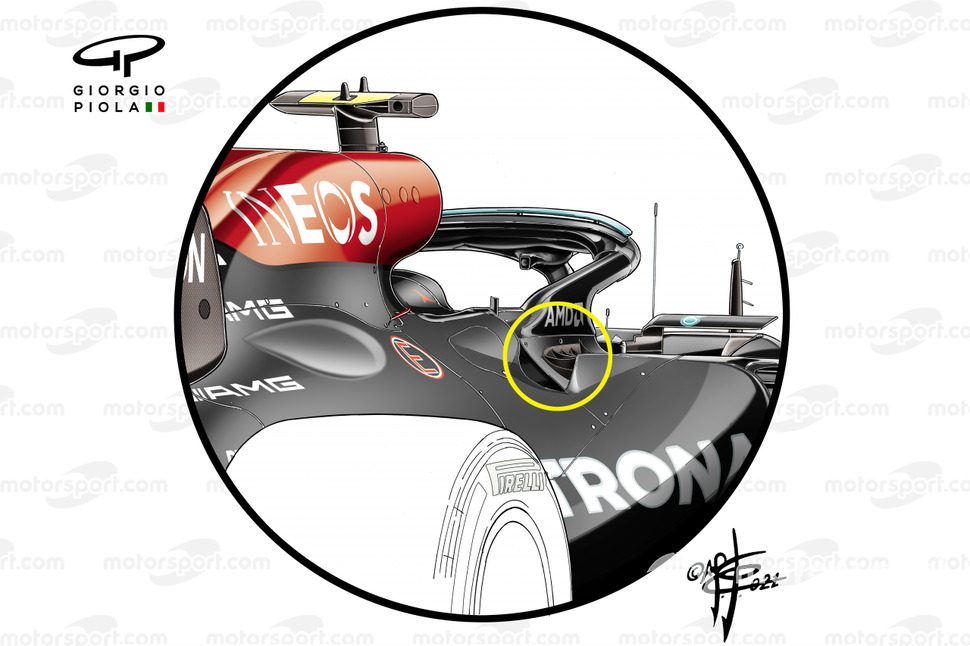 F1 teams always run on the absolute limit when it comes to cooling, as opening up bodywork reduces the car's aerodynamic efficiency.

However, it's a price that must be paid at circuits in warmer climates. But rather than sacrifice performance at the rear of the car and open up the rear cooling outlet, Mercedes opted to run the maximum cooling outlet in the panel beside the cockpit.

Perched on the joint between the halo and the sidepod, this interchangeable panel will have different configurations throughout the year in order to find the right trade-off between the prevailing cooling demands and aerodynamic performance.

There was plenty of talk about McLaren's diffuser during preseason testing, with the Woking based outfit having taken a different direction to its rivals. The animation covers the basics of what it has done and how.