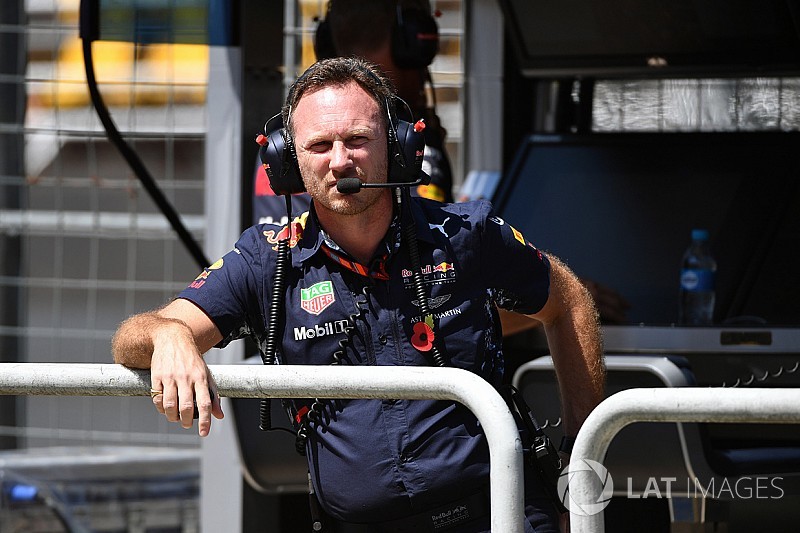 Red Bull boss Christian Horner has urged the FIA to go further in clamping down on teams burning oil in qualifying, after feeling that new Formula 1 rules introduced for 2018 are not strict enough.

In a bid to stop teams trying to exploit oil burn, several changes to the regulations were made for this year – including a new 0.6-litre per 100km oil usage limit, a restriction on different oil specifications and a ban on active control valves in parts of the engine.

But while these changes will deter teams from burning oil in races, Horner is concerned that the changes will not prevent manufacturers from trying exploit opportunities in qualifying modes, which is an area where his team's engine partner Renault has been playing catch-up.

Speaking during this week's Barcelona test, Horner called on motor racing's governing body to step up its game and try to find ways to prevent teams getting away with burning oil in qualifying.

"We'd like to see that [the rules] go further because it still doesn't deal with qualifying," said Horner.

"It contains the race but still there are windows of opportunity in qualifying which we'd like to see further closed down. Hopefully that will have an effect in creating engine convergence."

Horner believed that it is up to F1's car makers to agree a way to police the matter better.

"It's between the manufacturers," he said. "We still feel there are loopholes regarding qualifying that need tidying up regarding consumption. We felt it has been dealt with in the race.

"If you were to find a way of using lubricant in a different way and qualifying it, it offers a significant performance increase. We'd like to see belt and braces that closed down."

Renault F1 managing director Cyril Abiteboul said he was especially intrigued to see what rivals were able to do with qualifying modes from now on in the wake of the various oil burn clarifications.

"I am really curious to see what is left with the qualifying modes now that there have been a number of clampdowns on fuel and oil," he told Motorsport.com. "Let's see.

"We have an extra performance mode for qualifying. But I don't want to say too much about this at this moment in time."