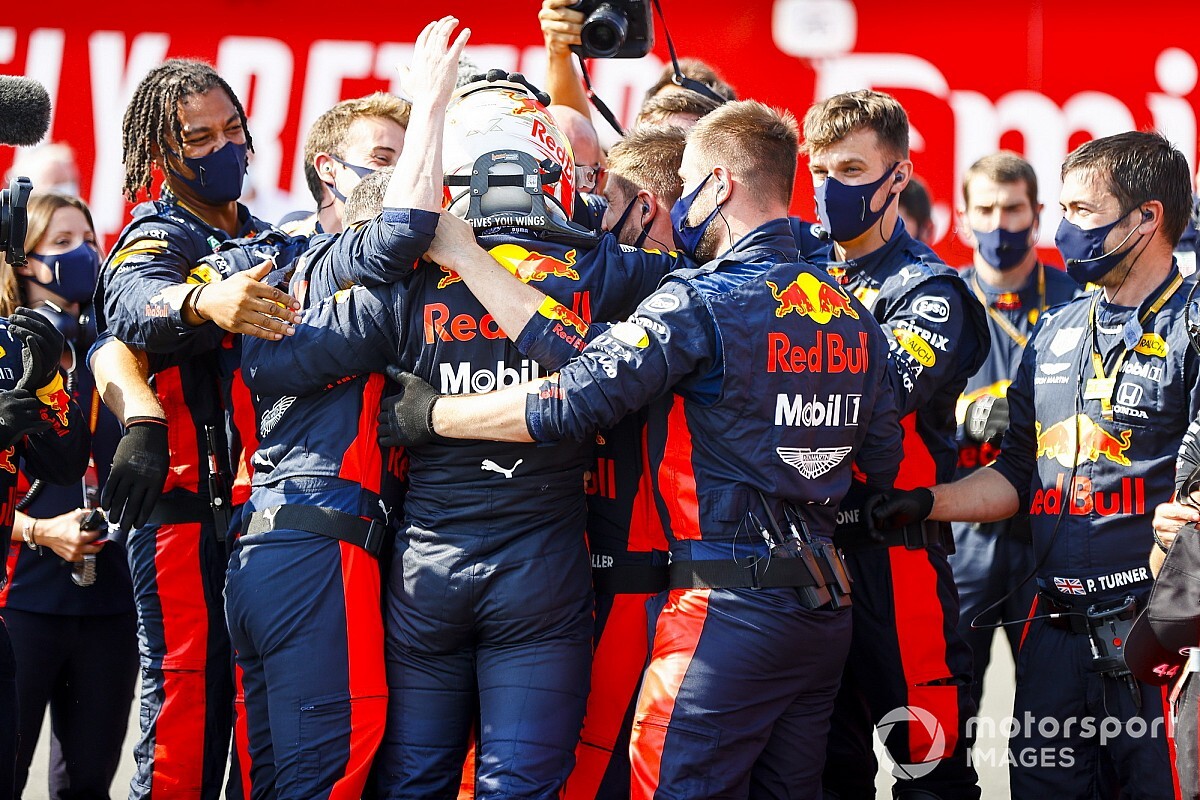 Red Bull’s Christian Horner says Max Verstappen’s victory in the 70th Anniversary GP at Silverstone was an “amazing performance” – but was surprised more teams didn't gamble on using the hard tyre in qualifying that played a key role.

Verstappen was the only top runner to start on the hard tyre, and he converted that into a surprise race win with a brilliant charging performance that saw him run a long first stint.

He was ultimately able to pit and come out just behind Valtteri Bottas, who he then passed. He gained the lead for the final time later in the race when Lewis Hamilton made his second stop after a long middle stint.

“It was an amazing performance today,” Horner told Sky Sports F1. “I mean, the pace in the race was beyond what we expected. We started on that sort of reverse strategy, and Max was just chilling out to the beginning of the race.

“And the pace in the car, it was just so easy today. And even after Mercedes pitted and went on to a new hard, we were able to pull away, and at that point, you think this is really game on now.”

Asked about Verstappen’s suggestion early in the race that he wanted to push and not drive like a grandma, Horner said: “His grandma must drive pretty quickly! We just had them covered today. And I think there's a lot for us to understand from this race.

“The car worked fantastically well, with Alex as well, and the pace was right there. And then we switched our strategy, because we were going to go hard, but we switched it to the medium in the middle to get rid of that tyre, so then we were essentially on the same strategy as the Mercedes boys, and we were able to cover them. And whatever they had, Max could cover, so that was fantastic.”

Horner admitted that Red Bull was surprised that others didn’t try to qualify on the hard tyre.

“What you have to remember is the compounds have gone a step softer this weekend. So what was the red tyre, the soft tyre last weekend, was the medium this weekend, and that felt for us really fragile.

“So we thought if we could manage to put a lap in qualifying, and it was so tight yesterday, electing to run again with that hard tyre though, we were surprised that we were the only ones that drove out on that tyre.”

He also conceded that the higher pressure mandated for this weekend have been less favourable for Mercedes.

“It could well be I mean, you see they've got a lot of downforce on that car, more wing than we're carrying and they've blistered their tyres within about five laps after after that first pitstop.

“And Max was still taking it very, very easy at that time and so there's a lot of stuff for us to understand. But you know, the result's a win, the 70th anniversary race, here at Silverstone is unbelievable.”

Asked about the prospects for a championship fight, Horner said: “They're a formidable opponent. But, you know, we've had a really strong performance today.

“We beat them fair and square, we beat them on pace, and on strategy. And I think that there's a lot of a lot of confidence that we'll take out of this race weekend.”