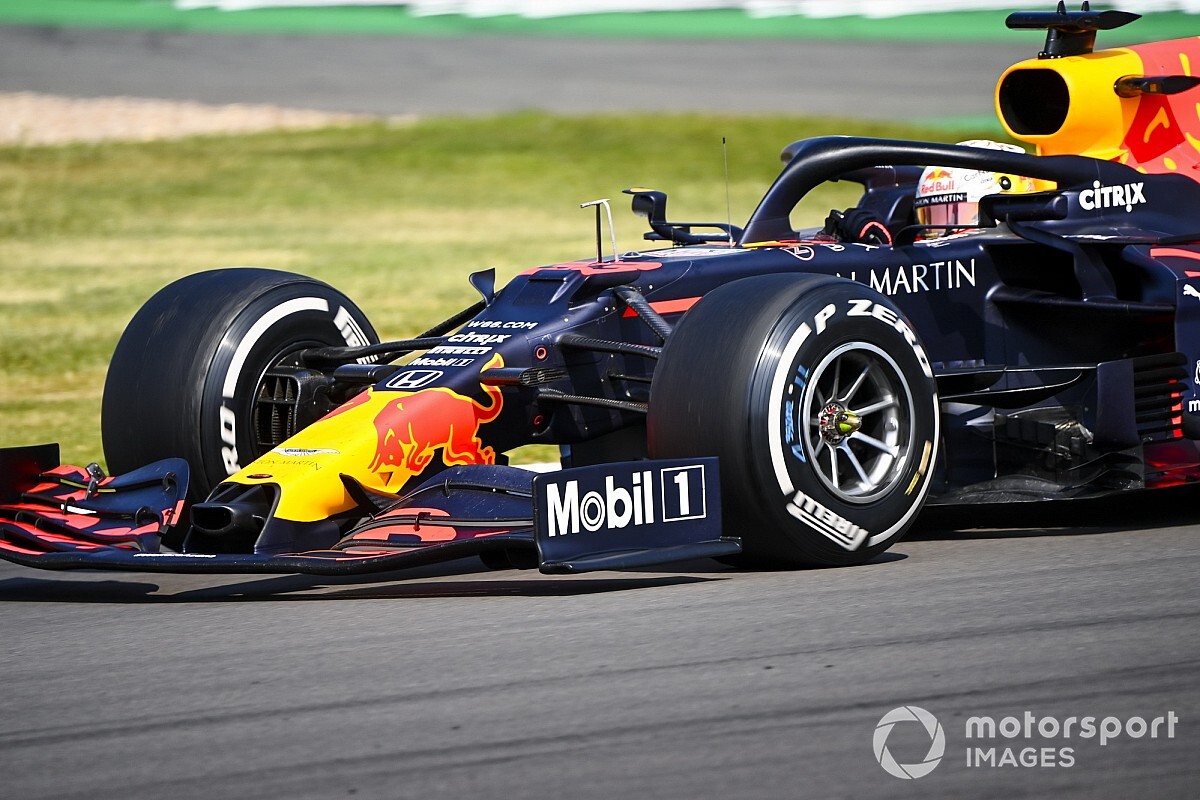 Red Bull Formula 1 boss Christian Horner says that Max Verstappen had to "buy into" the crucial decision to qualify on the hard tyre at the 70th Anniversary GP.

Verstappen was the only driver to use the hard in Q2 at Silverstone and thus commit to using it in the first stint, and it paid off when the Dutchman scored a victory over the two Mercedes drivers in a dominant style that even his own team hadn't anticipated.

Horner said Verstappen and the team had to balance the pros and cons of doing something different, and in the end they decided to go for it.

"Obviously he had to buy into it," he said. "So we run the simulations, we come up the risk and the reward. And we felt that if we just do the same as Mercedes following last week's performance, we'd end up with the same result.

"So at least by running the hard the theory was that there was a safety car later in the race, we'd have potentially a grip advantage at the back end of the race, but as it turned out, we actually had a pace advantage through the race.

"There's more risk, because if there's a safety car at certain times then you could end up in a spot of bother with it, but there's no crystal ball. It worked well, and it was a gamble worth taking and it paid off today.

"But we just simply had the pace which gave us that that length of stint and pace advantage over the Mercedes."

Horner admitted that Verstappen's pace on the hard tyre was unexpected.

"Our best bet to take on the Mercedes we felt was to do something different. And by starting on the hard tyre, which was, as you remember, last week's medium, that was a crucial factor.

"So a lot of data for us to understand, because we had a very dominant car today, and we were able to run longer with greater pace.

"And so we were actually able to create an overcut on the Mercedes on an older tyre, and bag track position, which enabled us then to switch our strategy to run the medium tyre and then cover them with a hard tyre, which put us effectively on a straight race to the end of the race on the same compound of tyre.

"So all of that was possible because o the way that Max managed the tyre, and the pace that we had in the car."

"I think Max has a great feeling for these tyres, we've seen him on numerous occasions manage the tyres incredibly well.

"We know that following a car closely, you do damage your tyres. We knew Mercedes would pit as they were on that softer compound to begin with, and we wanted to make sure we could make hay while the sun was shining, and have tyres left.

"He was very confident that he was really protecting those tyres through the high-speed corners, and was well-placed for when they did pit. He was absolutely right, and he managed that incredibly well.

"Likewise on the medium tyres when we ran them and then again at the end of the race when we had pace in hand just in case Lewis came back at him really aggressively on his much fresher tyres.

"When Mercedes pitted and we still had the same pace they had with tyres that were significantly older, and they were starting to blister their tyres quite early on, then you think OK, this is game on, we can win this race.