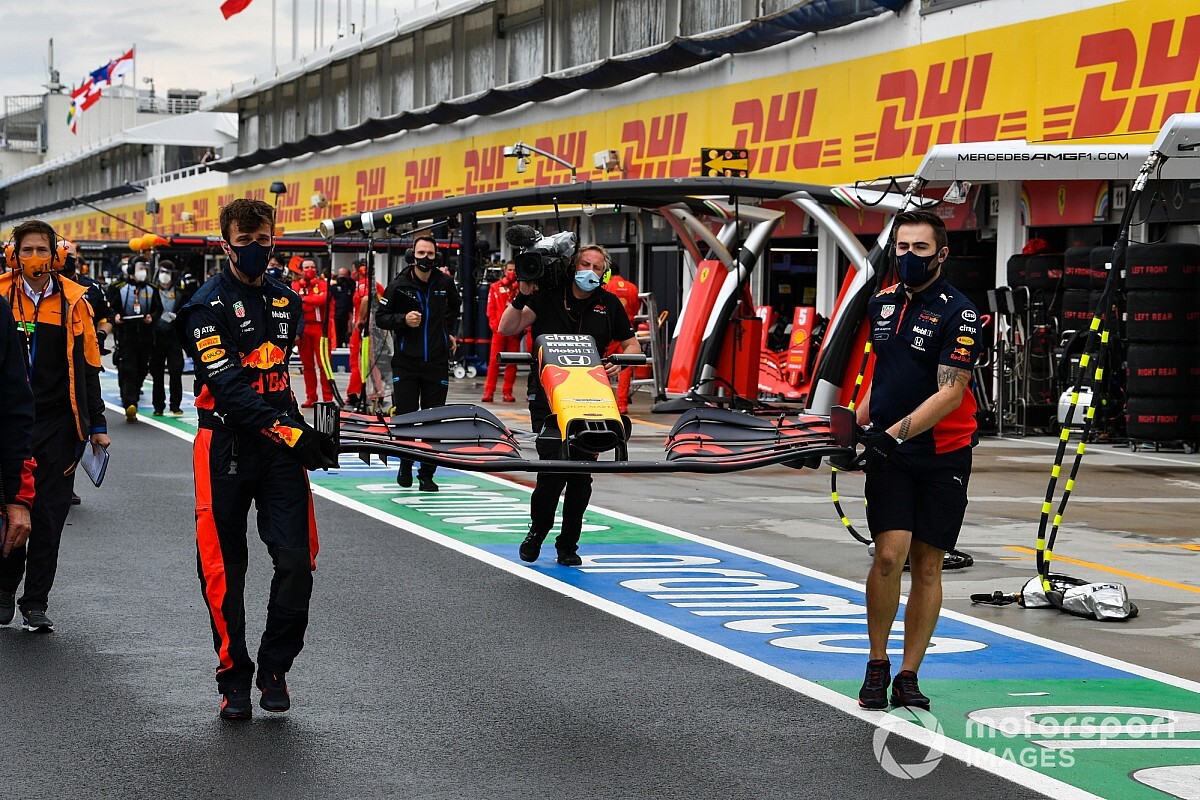 Red Bull Racing Formula 1 team boss Christian Horner has revealed a contributing factor behind Max Verstappen’s crash on his way to the grid in Hungary.

Horner says that Verstappen was going flat out on the damp track because that was required for the routine job of synchronising the eighth gear, and the Dutchman misjudged the grip level.

Horner added that the team’s impressively quick repair job on the grid and Verstappen’s subsequent charge to second place turned round what had been a “depressing” weekend for the team.

“I was watching the out lap on the monitor and saw Max run wide at turn six/seven,” he said in a Red Bull column.

“He was pushing to find out where the grip was and trying to synchronise eighth gear on the run down to turn 12, which means you have to be flat-out to get that synchronisation.

“The circuit was more slippery than he thought, and the tyres were pretty cold, nobody could quite believe their eyes when he went off into the barrier.

“Luckily, he managed to keep the engine running and reverse out of the barrier. We were unsure how serious the damage was and had to decide quickly whether to call him into the pit lane, but we made the call to send him to the grid to see if we could get the job done so he wouldn’t lose his grid position.”

Horner praised the crew for the lightning repair job they performed: “The funny thing is, I wasn't stressed about it. I felt that if anyone could do the repairs then our mechanics could.

“You'd need to be a sensational piano player to be able to work your fingers within the space they had, such is the tight design of these cars.

“Other teams' mechanics clapped our guys off the grid. It was the absolute epitome of teamwork, all the guys working together in synchronisation against the clock and getting the job done.

“They were properly buzzed in the garage and then, of course, they had to calm themselves down because it is the same mechanics doing the pit stops and they smashed in a sub two second pit stop as well - the quickest during the race - for the third race in a row. It was a phenomenal team performance.”

Horner conceded that prior to the race it had been a poor weekend for the team, which is struggling to find consistency with the car.

“Hungary is normally a track where we have been strong, but last Friday we were a little bit at sea. The mechanics broke the curfew making changes but still the car was not performing as it should, and the drivers were struggling with the unpredictable characteristics.

"The changing weather conditions also reduced the opportunity for a like for like comparison between sessions which really hampered our progress.

“So, after qualifying we were well out of position in seventh and 13th on the grid and if I’m honest it was a pretty depressing evening.

“It felt like one those weekends where nothing was going our way despite everyone working their arses off. One thing you can be sure of about our team is that we never give up and we all have a massive amount of fight in us.

“We went into Sunday with a renewed energy and you can only imagine the feeling when we saw Max hit the wall. But once we got over the out-lap incident, the drivers did a great job in the race and the car performed better than expected.

“Max put the incident out of his mind, that was a real sign of maturity from him and Alex [Albon] put his head down and fought his way past some of the most experienced drivers on the grid.”

Horner says that the car still has potential: “Hats off to Mercedes, they have developed a competitive car and we are going to have to go some to catch them but that is the focus of the whole team.

“We have to address the issues we have but I think RB16 has the makings of a very good car, we just have to make sure we extract the full performance and fix the handling issues.”

The "borderline outrageous" car that could change F1 forever

Willy T. Ribbs: F1 "light years" ahead of US racing in diversity