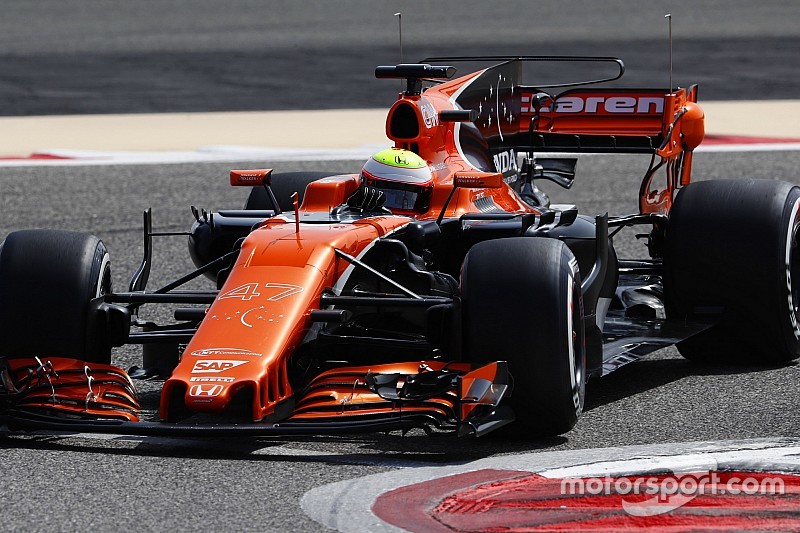 Honda's troubles in the heat of Bahrain showed no signs of easing on Tuesday when its Formula 1 testing programme was cut short by a reliability problem after just two laps.

On the back of a troubled F1 weekend, where it suffered a run of failures with its MGU-H, Honda had hoped for better fortune during the two-day in-season test at Sakhir this week.

But despite McLaren development driver Oliver Turvey managing to get out on track as soon as testing got underway, he was only able to complete two installation laps before being confined to the garage with a problem.

Honda engineers had discovered a water leak in the Energy Recovery System, and there was no option but to make an engine change.

Work on the switch was taking place on Tuesday lunchtime, and it is hoped that this can be completed to allow Turvey to get back out on track later.

It is understood that the engine being used by Turvey was a new test specification that had been shipped from Honda's Sakura facility in Japan, with the replacement unit being fitted also a new one.

Honda had said ahead of this week's running that it wanted to trial some new ideas to help improve its performance, as well as potentially look at cures to the issues it faced over the grand prix weekend.

Investigations as the cause of the latest water leak are ongoing, and it is unclear if the issue that has stopped Turvey is related to the MGU-H failures that hit McLaren last weekend.

Ahead of the race, Vandoorne also suffered another failure when water pressure dropped – with initial suspicions surrounding a repeat failure of the MGU-H. The Belgian was unable to start the race.

Honda's F1 chief Yusuke Hasegawa flew back to Honda's headquarters in Japan after the Bahrain Grand Prix to help work on the investigation into the Bahrain GP problems, and help push forward development plans for the rest of the season.

One theory is that the hot temperatures in Bahrain have contributed to Honda's troubles, but a definite answer will not be known until later this week when the broken parts have been stripped down and analysed.