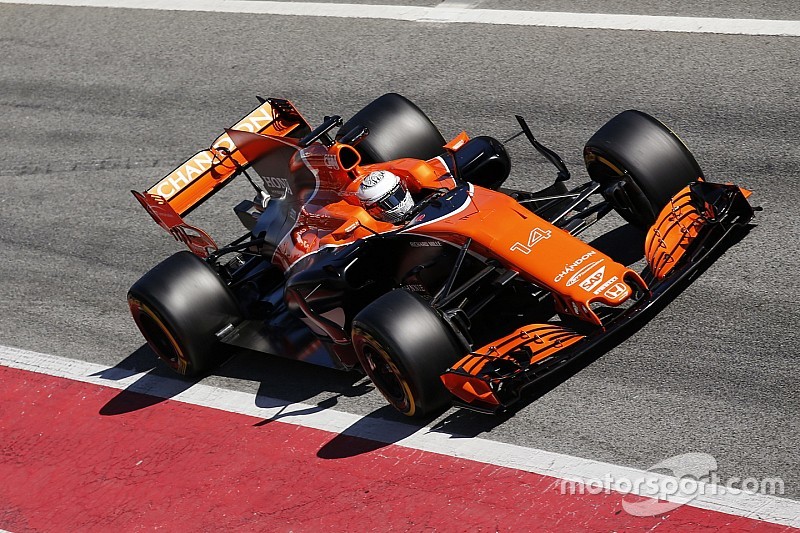 Honda is "feeling sorry" for McLaren and its drivers Fernando Alonso and Stoffel Vandoorne for the engine problems that have marred the first pre-season Formula 1 test.

The Japanese car manufacturer has had a difficult time at Barcelona this week, after suffering an oil tank issue on the opening day and then a full failure on Tuesday.

While Honda is still awaiting an answer overnight as to the cause of yesterday's problem, its F1 engine chief Yusuke Hasegawa made it clear that he felt bad for McLaren's drivers.

"Obviously we are not happy to have trouble, but this is a test – and we are feeling sorry for both drivers," he said. "So, we need to find out what has happened in the day two engine especially."

Once Honda has an answer as to the failure, then Hasegawa said it will work out if modifications are needed for the Melbourne-spec engine that is due to run next week.

"We didn't know the exact cause of the problem of yesterday's engine, but so far we didn't change anything," he said.

"Because we don't know the cause of the problem we can't tell [what progress will be like] but I believe we can of course solve the issue before Melbourne."

When asked what specification of engine will be run in testing next week, Hasegawa said: "It depends on what was the problem of yesterday's one was, but we are supposed to introduce the same spec engine for Melbourne [that we will run] next week of course."

McLaren racing director Eric Boullier was clearly disappointed with how Honda's early running of its redesigned engine had gone, but had some faith that improvement could be eked out over time.

"We have many issues," he said. "None of them are fundamental – we don't know yet, even Hasegawa-san, all of them, because the yesterday engine is on its way to Japan.

"Today finally we can run, so we have some usual glitches, the ones you get on day one, but obviously we have them on day three. It is a new layout of the engine from Honda and obviously some unexpected glitches but nothing is fundamental."

Hasegawa did state that the oil tank issue Honda suffered on day one is easily curable, with a temporary fix in place now which has alleviated any immediate concerns.

"So far we can live with the current modified oil tank, but obviously through the season we always try to improve the system," he said.

"So if we have the chance we may try to introduce some more oil tank modification but so far I don't think it is a problem to run with this one."