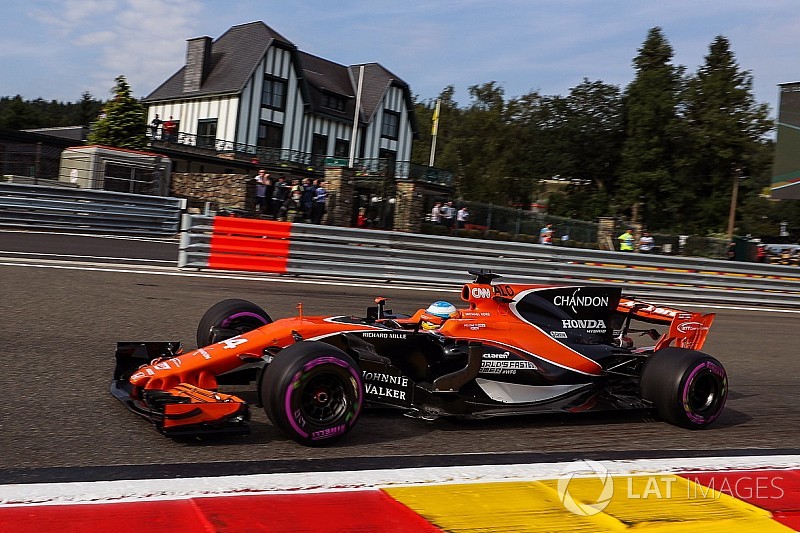 Honda had hoped to introduce a 'Spec 4' Formula 1 engine for this weekend's Belgian Grand prix, but failed to meet its development schedule, according to Yusuke Hasegawa.

The Japanese manufacturer is pushing ahead with an aggressive development plan as it bids to make gains and prove to McLaren that they should continue with their partnership beyond this year.

On Thursday, it confirmed both Fernando Alonso and Stoffel Vandoorne would run updated internal combustion engines at Spa, with Vandoorne also running a reliability improvement.

But Honda chief Hasegawa has revealed the update, which it christened spec 3.5 and 3.6, was only half of the package it had hoped to introduce.

"We had planned to introduce 'spec 4' here but we failed, we didn't match our schedule," said Hasegawa. "We're halfway through our upgrade so we called it 3.5 and 3.6."

Honda feels the upgrade has boosted performance, but Hasegawa said the gain was difficult to quantify given this is the first circuit it has run on.

"It's difficult to compare the previous engine to this engine because it's a different circuit," he said. "From the data point of view, we see a good update of the performance here."

McLaren executive director Zak Brown noted a step forward at Spa, but conceded the outfit, which is currently down in ninth in the constructors' championship, had been hoping for more.

Spa follows McLaren-Honda's best race of the season in Hungary, before the summer break, when Alonso and Vandoorne finished sixth and 10th respectively.

Hasegawa said Honda took comfort from that result, but knows it still has a lot of work to do be on par with its rivals.

"Still we need to update engine performance to convince McLaren."