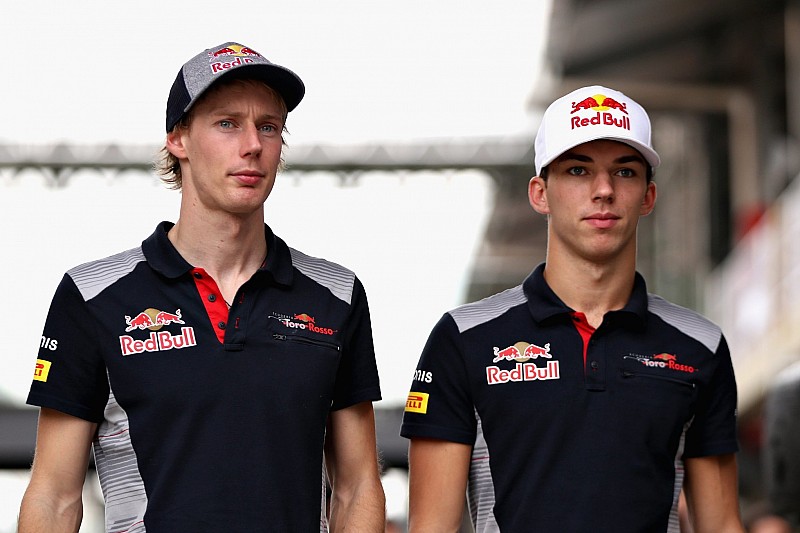 Toro Rosso has announced that Brendon Hartley and Pierre Gasly will continue to race for the team in Formula 1 in 2018.

The team has ended the year with Hartley and Gasly as its drivers after starting the season with Carlos Sainz and Daniil Kvyat, with the Spaniard switching to Renault early and the Russian being dropped.

While Gasly was the latest driver to emerge from Red Bull's junior programme, World Endurance champion Hartley has enjoyed a reunion with the energy drinks firm's F1 programme after being dropped from its ladder system in 2010.

"We're really happy to have Pierre and Brendon confirmed so early by Red Bull as our drivers for 2018", said team principal Franz Tost.

"During this last part of the year they've shown that they're ready for Formula 1, getting to grips with the car quickly, showing good performances and always demonstrating to be prepared for the challenge.

"As we know, F1 is something that not all drivers can adapt to this fast.

"Therefore, we're looking forward to having a full year with them; one where we can hopefully provide them with a good package which, combined with driver consistency, can surely put them in the best possible situation to deliver."

Gasly has made four starts for the team this season, missing the US Grand Prix to contest the Super Formula finale that was abandoned, which created the opportunity for Hartley to make his F1 debut in his place.

"I'm super happy to race for Toro Rosso in 2018, for my first proper season in Formula 1," said Gasly.

"I would like to thank all the people involved, who helped me get here: Red Bull, Toro Rosso, my family and all the ones who have supported me in the lower series.

"I'm really excited and super motivated to give it my all in Abu Dhabi and the whole of next year. I just can't wait."

Hartley, who appeared on course to switch to IndyCar following Porsche's withdrawal from the LMP1 category of the WEC, added: "It's very satisfying to have converted an opportunity that came as a surprise into a 2018 F1 drive, I couldn't be happier.

"I'd like to thank Red Bull and Toro Rosso for believing in me and giving me this second chance – dreams can come true.

"I'm now going to carry on working harder than ever in order to finish this busy end of season on a high and start the new year as strong as possible... Bring it!"

Neither driver has scored points yet for Toro Rosso, with Gasly's 12th place in Brazil last weekend the best finish achieved so far.