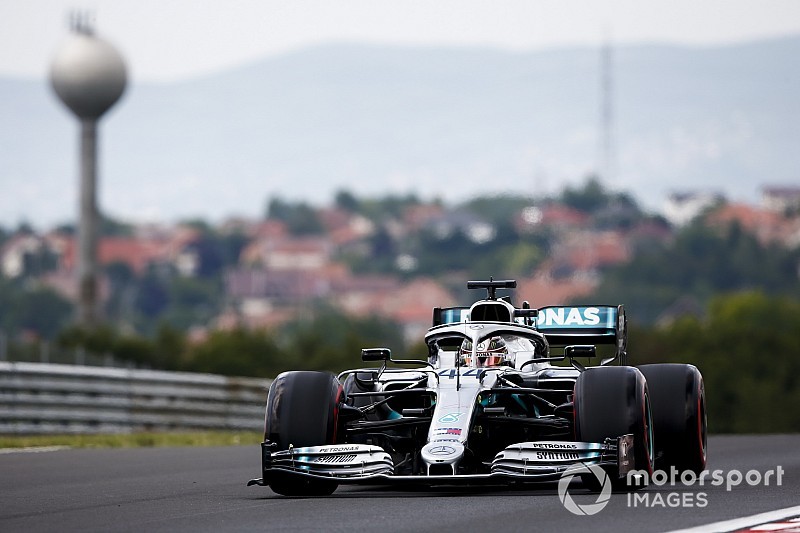 Lewis Hamilton topped an ultra-tight final practice session for the Hungarian Grand Prix, as Max Verstappen and Sebastian Vettel lapped within a tenth of the Formula 1 points leader.

Vettel wound up 0.082s off the pace in the lead Ferrari to tease a three-way fight for pole in this afternoon’s qualifying session.

The session started 10 minutes later than planned because of the lengthy process of applying cement dust on the exit of the fast Turn 4 left-hander, where a lot of oil had been dropped during the Formula 2 race that preceded FP3.

When the shortened 50-minute session started the drivers kicked up huge clouds of dust at that part of the track and were visibly struggling for grip.

Laptimes improved fairly quickly and by mid-session the pace was faster than on Friday, with Verstappen the first man into the 1m17s but Hamilton setting the first truly representative soft-tyre run with a 1m17.051s.

He headed a Mercedes one-two at that stage, but with teams having use of an additional set of soft tyres thanks to the rain-hit FP2 the order changed several times in the second half of the session as drivers were able to commit to multiple runs.

Verstappen initially shaded Hamilton on his second flying lap, before switching to a fresh set of softs and smashing the 1m17s barrier with a 1m16.489s.

That was quickly beaten by Leclerc and then Bottas, before Hamilton pumped in a 1m16.339s to reassume the lead in the standings ahead of Leclerc and Verstappen.

McLaren’s Lando Norris kicked off the final bout of fresh-tyre runs and jumped to fifth – having briefly run third after the second runs – before the leaders emerged for their final qualifying simulations.

Verstappen lit up the timing screens and jumped 0.242s clear of Hamilton’s benchmark with a 1m16.097s that included the fastest middle and final sectors so far.

Vettel then moved into second place, 0.069s slower than Verstappen, having earlier complained of struggling with a “different car compared to before” during a scruffy session.

Verstappen aborted a second attempt on the same set of tyres as Hamilton wound up for one final run.

Hamilton did not improve his first sector but a personal best in the middle part of the lap and the fastest final sector hauled him back to the top by just 0.013s.

Bottas’s first run on his last set of tyres was hurt by a moment through Turn 4 and then quickly catching a slow Racing Point as he approached Turn 5, which triggered a curse from the Finn on the radio to his team.

He finished fourth, ahead of Leclerc, who failed to improve on his final run.

The second Red Bull of Pierre Gasly sixth and 0.6s off the pace – having reported possible minor front wing damage after running wide on his first set of soft tyres.

Norris was shuffled back to seventh but won the best-of-the-rest fight, with McLaren teammate Carlos Sainz Jr ninth despite complaining of a “horrible” Renault engine that was suffering from “misfires”.

The McLarens were split by the Alfa Romeo of Kimi Raikkonen, while Kevin Magnussen edged Haas teammate Romain Grosjean to complete the top 10.

At the tail of the field, Williams’s encouraging practice pace continued as George Russell lapped within two seconds of Hamilton’s benchmark, outpaced the Racing Point of Lance Stroll for the second time in three sessions and ending up only half a tenth slower than Alex Albon’s Toro Rosso.