Lewis Hamilton believes his dominant victory in the Turkish Grand Prix was his "stand-out" performance en route to his seventh Formula 1 title in 2020. 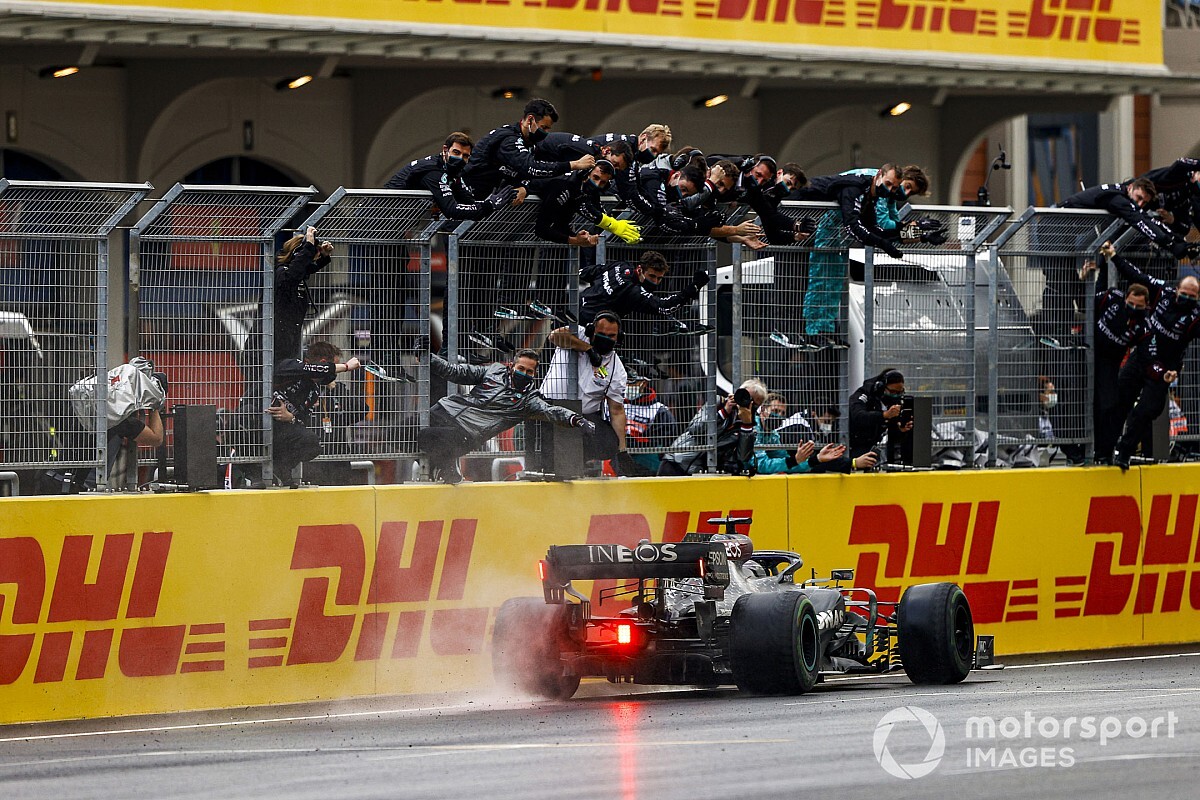 Hamilton tied Michael Schumacher's record of seven drivers' championships after a dominant campaign that saw him win 11 of the 16 races he took part in.

The Mercedes driver wrapped up the title with three races to spare, and also surpassed Schumacher's record tally of 91 race wins, ending the season with 95 victories to his name.

Hamilton's title campaign featured a number of outstanding performances, including his pole lap in torrential rain in Styria and winning the British Grand Prix on three wheels after a last-lap tyre failure.

But when reflecting on his season, Hamilton picked his victory in the Turkish Grand Prix as his best display.

"Turkey, naturally is the closest one to memory, because it was not that long ago," Hamilton said.

"I think that was [the best] for me, in the circumstances we were faced with as drivers, and with it being so pressured, the championship could be won in that moment.

"I would say that for me was my stand-out performance."

Low grip conditions at the resurfaced Istanbul Park made for a difficult rain-hit qualifying, meaning Hamilton could only qualify a lowly sixth on the grid.

But he made an ambitious one-stop strategy work in drizzly conditions through the race to move into the lead, before ultimately winning the race by over 30 seconds.

The result wrapped up the championship for Hamilton after teammate and closest rival Valtteri Bottas failed to score any points, finishing one lap down in 14th.

Hamilton ended up missing the Sakhir Grand Prix after contracting COVID-19, by which point the title had already been settled.

There was uncertainty in the beginning of the year over how many races F1 would manage to complete in the season due to the ongoing pandemic, but Hamilton said he felt no change in approach when starting the campaign.

"I always take it one race at a time, it doesn't change the approach at all," Hamilton said.

"It's just the season started much later, which meant that the normal build up, the normal race prep that I would have in building up to the first grand prix and arriving ready to peak shortly after - and then there was no races for a period of time.

"It was just trying to discover the best way to train and prepare yourself for the opportunity if it comes along that the season is going to start.

"It was weird to start mid-year, and all be in Europe and have back the triple-headers. But I think we showed strength and real depth this year as a team."