Hamilton was "too friendly" with Bottas at start 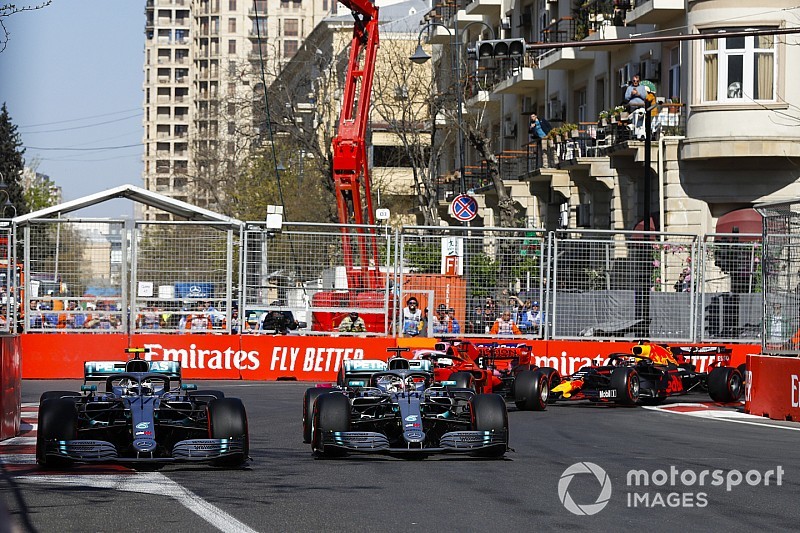 Lewis Hamilton reckons he was "too friendly" against teammate Valtteri Bottas at the first corner, as he labelled his Azerbaijan Grand Prix performance as "under par".

Hamilton made a good getaway from second on the grid to pull alongside pole position man Bottas on the run to Turn 1, as the pair ran around the first corners side-by-side.

Bottas eventually managed to get in front, and Hamilton suggested he could have made life tougher on a weekend when his teammate had the upper hand.

"I didn't get the job done in qualifying, he [Bottas] did," Hamilton told Sky. "And then in the race I was too friendly at Turn 1 and basically gave it to him.

"He drove a fantastic race and made no mistakes so he deserved the win this weekend."

Hamilton said that considering Baku is not one of his favourite circuits he was happy to have come through the weekend with Mercedes having taken a 1-2 finish.

"This is not our strongest race of the season. This has always been a difficult race for me so this is a really good result considering," he said.

"It was a fantastic result for the team. Valtteri did an exceptional job this weekend and truly deserves the win. It was a bit of an under-par performance from myself so I just need to work hard.

"It is not I don't enjoy [it], I just struggle here. There are certain races I struggle and then there are others [where I don't] and I can't really point it out. I got quicker at the end but it was too late by then."

Although Hamilton got within DRS range of Bottas near the end of the race, his teammate said that he never felt the win was going to be lost.

The Finn said: "It was actually a tough race even though there was not that much happening at the front.

"Lewis was putting me under pressure all the time so I couldn't do any mistakes, but honestly everything was under control so I am happy to see the chequered flag."

Ricciardo gets grid penalty for Spain after Kvyat clash