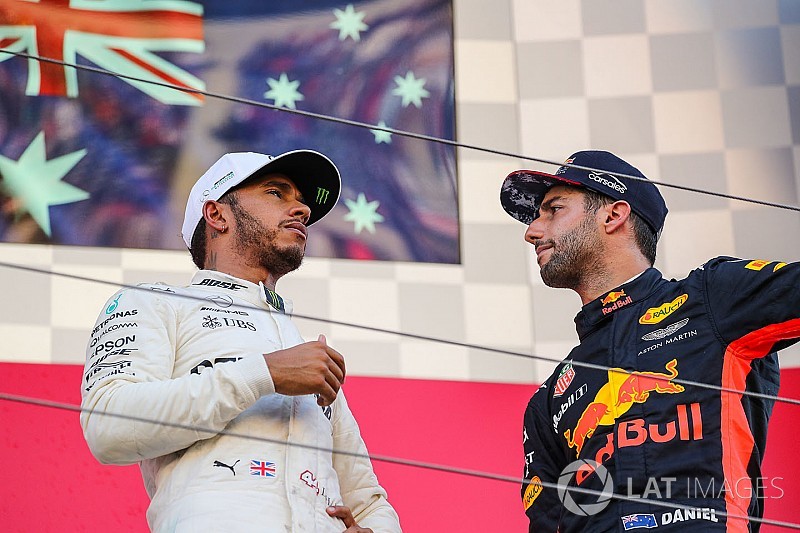 Formula 1 world champion Lewis Hamilton believes Daniel Ricciardo does not have a serious option beyond Red Bull for next season.

Ricciardo, who won last weekend's Monaco Grand Prix, has been backed by Red Bull his entire F1 career but his current deal expires this season.

Neither Hamilton nor Valtteri Bottas have a contract at Mercedes beyond this year, while Ferrari needs to decide who Sebastian Vettel's teammate will be.

Hamilton decided to leave long-time backer McLaren in 2012 to join Mercedes, but said Ricciardo's situation is not quite the same because there is no clear alternative to Red Bull.

"It's different for everyone so I can't imagine how he's mentally positioned himself," Hamilton said when asked by Motorsport.com about Ricciardo and his future.

"They're still a strong team, they've got good potential moving forwards. I would imagine his future is there, but he's one of the top drivers so I'm sure there are options for him.

"Obviously in the top area there's only Ferrari and Red Bull and Mercedes that he could consider.

"And if you look at Ferrari, I imagine Kimi's going to want to continue - and why not?

"He's driving really well this year and he doesn't seem to be ageing. I'm sure he'll go for a little bit longer."

However, Verstappen has endured a fraught start to the season and denied Red Bull a likely one-two in Monaco by crashing in final practice and missing qualifying.

Hamilton said Ricciardo is "pretty much the lead driver" at Red Bull now and suggested he deserved to given an offer that matches his worth, joking he would negotiate on the Australian's behalf.

"I said to him he's doing a solid, solid job," said Hamilton. "Ultimately he's got a teammate that is, from what I hear, making a lot more money than him and yet he's more consistent, keeping the car together a lot more - and, more often than not, pulling through.

"It's important in a team to feel that you're valued according to your contribution. He should definitely have his contract on the table and have his options ready."

Red Bull could partner Honda next season in a bid to get back to championship-winning ways, but the Japanese manufacturer is a gamble after three unsuccessful years with McLaren.

Renault's underpowered engine has ultimately restricted Red Bull in recent seasons but Hamilton said the team is "not a bad place to be".

"If at some stage they get an engine, they're going to be even closer in the mix with us," said Hamilton.

"There's still a long way to go [this season - they could win a lot more races. He's just got to get his head down and keep doing what he's doing."

Why Monaco's "most boring race ever" claims are wrong