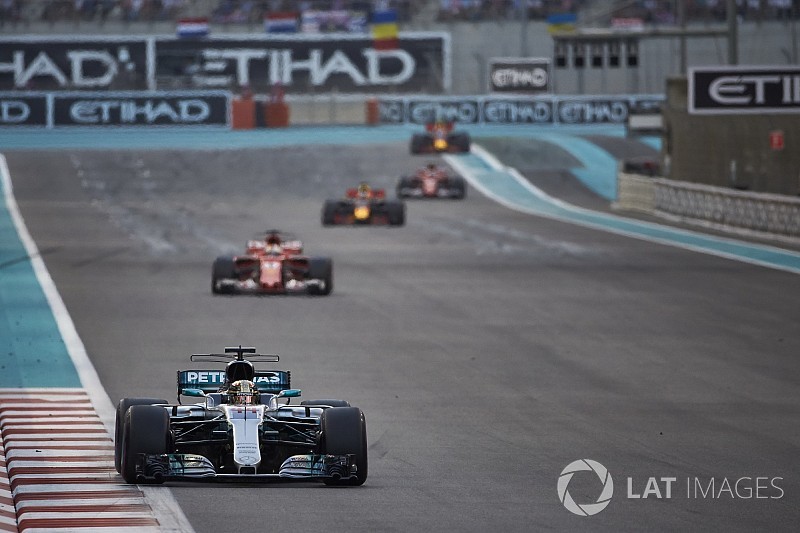 Formula 1 world champion Lewis Hamilton has named the three drivers he sees as his biggest rivals on the current grand prix grid.

Hamilton, who claimed the fourth F1 championship crown of his career in 2017, identified McLaren's Fernando Alonso, Ferrari's Sebastian Vettel and Red Bull's Max Verstappen as the three drivers he most has to watch out for.

When asked which of those three he would most have to watch if Mercedes, Ferrari, McLaren and Red Bull all produced cars of a similar level of competitiveness, Hamilton replied: "We're the four strongest drivers. I really hope we are all in the fight next year. It would be friggin' amazing."

Hamilton enjoyed wheel-to-wheel battles with all three at various points in 2017, allowing him to build a portfolio of knowledge on how to handle each of them.

"You look at them all slightly differently," added Hamilton, who said it was possible to measure the differences between all four drivers in "millimetres".

"They all have different characteristics. Sebastian, for example, from this year, you could say: 'Give more space.' - not in a negative way.

"Max takes a lot of risks. Also, you have to give [him] more space, but he is more inexperienced than the other guys.

"Fernando - toughest driver there is, so you have to keep that utmost respect for each other, but you've really got to play your cards right to utilise the racecraft.

Hamilton suggested Verstappen would become an even bigger threat once he builds more experience, having only raced in F1 for three seasons.

"He's doing wonderful things, but he is going to grow so much over the next 10 years," Hamilton said.

"I don't think it will be a problem, it'll just be freaking tough [to beat him]. Wouldn't that be a fight? Even I'd pay to see that."