Hamilton: I was quickest "by a long way" in Brazilian GP 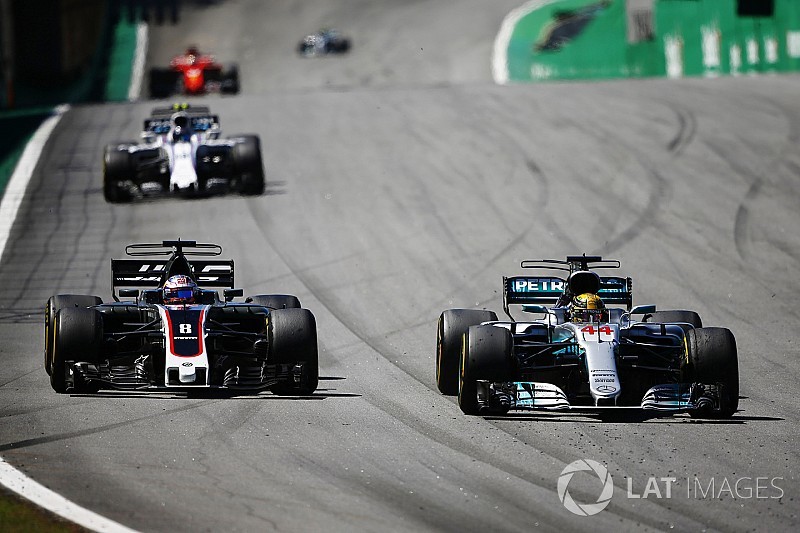 Formula 1 champion Lewis Hamilton feels he was quickest “by a long way” in the Brazilian Grand Prix, as he fought his way through to fourth place from a pitlane start.

Having crashed in the first segment of qualifying on Saturday, Hamilton started from the pits and scythed his way through the pack in the opening stages of the race.

Fifth after making his only pitstop in the race, he picked off the Red Bull of Max Verstappen before catching up to the Ferrari of Kimi Raikkonen, but he could not overtake the Finn for the final spot on the podium.

"I was quickest all weekend, I probably would have been on pole, and pole to finish [first], but this made it a more enjoyable race for sure," Hamilton told NBC.

"I was quicker than everyone today by a long way. That's the real positive to take from it.

"I had good pace on the long runs on Friday [in practice] – particularly on the soft, I think I was almost half a second quicker than everyone. And I had an old engine and a different aero package, so I had pace.

"But today I was 110 percent the whole way, I had to bring up a little bit extra.

"Kimi was right there, but my tyres just let go and I had nothing left."

Hamilton said having to battle through the field reminded him of his early days in karting.

"It was reminiscent of when I first started racing as a kid, we had not a great go-kart and we started from the back and had to make our way through to the front.

"That's how it felt today, except obviously I had a good car and I was able to do something special with it."

Despite Hamilton ending up just 5.5s adrift at the chequered flag, Sebastian Vettel – who won the race for Ferrari – did not feel the Briton was a threat for race victory.

Vettel also reckoned that the tyre strategy Hamilton was on – starting on softs and switching to supersofts – was advantageous, with the cars that lined up at the sharp end of the grid forced to use the opposite strategy.

"The track ramped up at the end so supersoft was the faster tyre."

Bottas says he "lost" the Brazilian GP at first corner