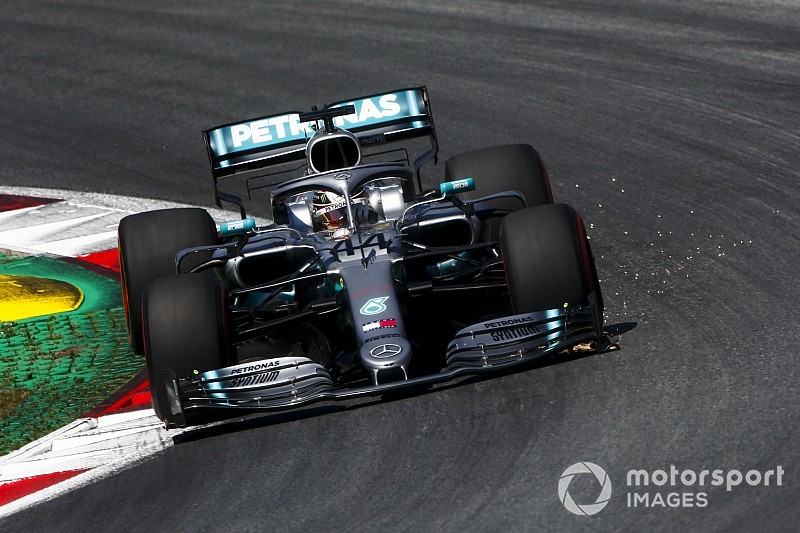 Formula 1 championship leader Lewis Hamilton has been demoted from the front row for the Austrian Grand Prix after incurring a penalty for impeding Kimi Raikkonen in qualifying.

Hamilton had qualified second to Ferrari driver Charles Leclerc, but will now be relegated to fourth.

Red Bull driver Max Verstappen is promoted to the front row, while Hamilton will join teammate Valtteri Bottas on the second row.

The incident occurred in the first segment of qualifying, with Hamilton caught out by the approaching Raikkonen at the sharp Turn 3 right-hander and straightlining the corner in a late attempt to avoid impeding the Finn.

But Raikkonen ended up rolling out of his push lap, and flashed a middle-finger gesture in Hamilton's direction as he went past.

Hamilton said in the post-qualifying press conference that he hadn't realised that Raikkonen was among the cars needing to be let through, but the stewards' verdict has since suggested the Briton had been made aware by his Mercedes team.

"Totally deserved the penalty today and have no problem accepting it," said Hamilton later. "Was a mistake on my behalf and I take full responsibility for it. It wasn't intentional. Anyway, tomorrow is another day and an opportunity to rise."

"Car 44 [Hamilton] had just come out of the pits and was informed of the cars approaching, including car 7 [Raikkonen]," the stewards' explanation read.

"Although car 44 tried to take evasive action when he became aware of car 7 approaching on a fast lap, it was not sufficient to avoid impeding car 7, which then had to abort the lap."

Hamilton also incurred a penalty point for the offence, which now stands as the single point on his licence for the past 12-month period.

Hamilton will start fourth, rather than fifth, because of way that the FIA system applies penalties in the order they are handed out, but vacant grid slots are only closed up once all the sanctions have been handed out, rather than the order being shuffled up after each driver is moved.

Gasly "upset with myself" after costly Q3 error