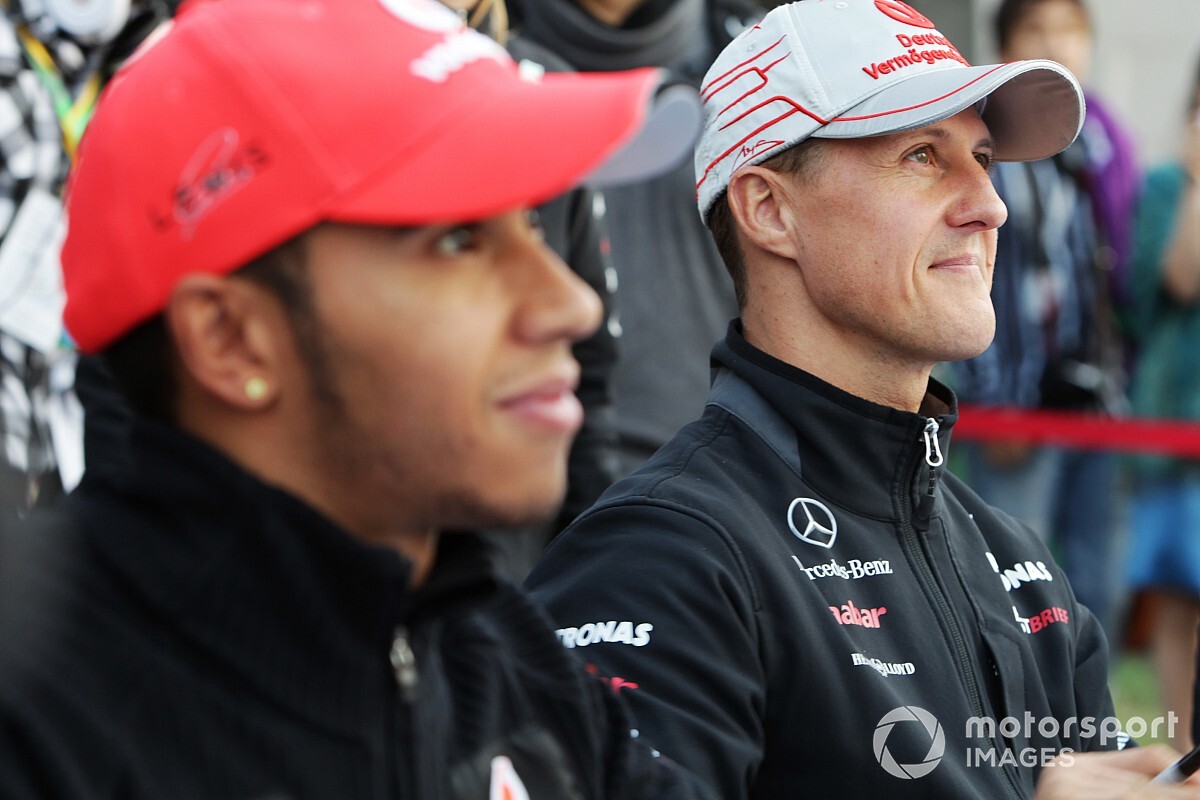 Lewis Hamilton says he has only understood the key influence that Formula 1 champions like Michael Schumacher have in pushing their teams forward since arriving at Mercedes.

Hamilton has just matched Schumacher’s tally of seven world titles, and now also holds the records for the most victories and the most pole positions in F1 history.

But while his latest triumph has still not silenced those who suggest he only wins because he has the best car, Hamilton says that even he did not fully comprehend just how big a role drivers must play in car development before he joined his current team as Schumacher's replacement.

Hamilton says that since he has delivered title after title for Mercedes, it has opened his eyes about the role that his predecessor Schumacher played at the outfit - and he says it is something those outside the sport do not appreciate.

“In terms of helping develop the car, that’s something that I think that drivers – and as I’m approaching where Michael was – I never fully understood,” said Hamilton.

“It’s difficult for someone starting in F1, for young drivers, it’s hard for them to fully understand what it is that Michael did, what I am doing in this team.

“You know, you have to be the rudder. You have this powerful group of intelligent, impassioned people and of course you have the head of the team which is the main rudder.

“But in terms of development, how to get the car to go further and work with the characteristics of the driver, that’s my job and I’d say I’m definitely very, very proud of that. Unfortunately people don’t get to see all that in the background.”

In a wide-ranging interview reflecting on his 2020 championship, Hamilton said that this season felt like a step above his previous campaign.

“It definitely feels like the most all-rounded highest level I’ve been at, yeah,” he said. “It’s a natural progression, naturally. You can’t always get it right.

“This year, being as we’ve also had Covid, we’ve had more time to focus on areas of weakness and I would say last year the racing was strong, qualifying wasn’t so great and I came into this season trying to make sure I kept the strengths but worked on the weaknesses.

“But in improving in qualifying I have managed to improve the racing, which was a bit of a surprise. I was not expecting that.”

But Hamilton still thinks there is room for further improvement in the future, as he reckons the easiest thing is simply to let his standards drop.

“For any athlete that is at the top of their game, you could always say it is going to be hard to raise the bar,” he said. “The easiest thing is to let it slip. But it is not like I am new to this.

“I know what I need to do to get myself in the right head space and physically in the right place also. I don’t really see it being an issue of keeping consistency but it is much smaller increments in terms of raising the bar.

“I don’t really know whether it can get any better. The racing, for example, is super-strong. But there are still elements that could be better. But not everything is easy to improve on.”

For a full interview with Hamilton, where he talks about his role in developing the Mercedes car and opens up on his working relationship with Mercedes, click here.

Interview: The hidden side of what’s made Hamilton so good