Hamilton: Nothing "controversial" about Rosberg collision 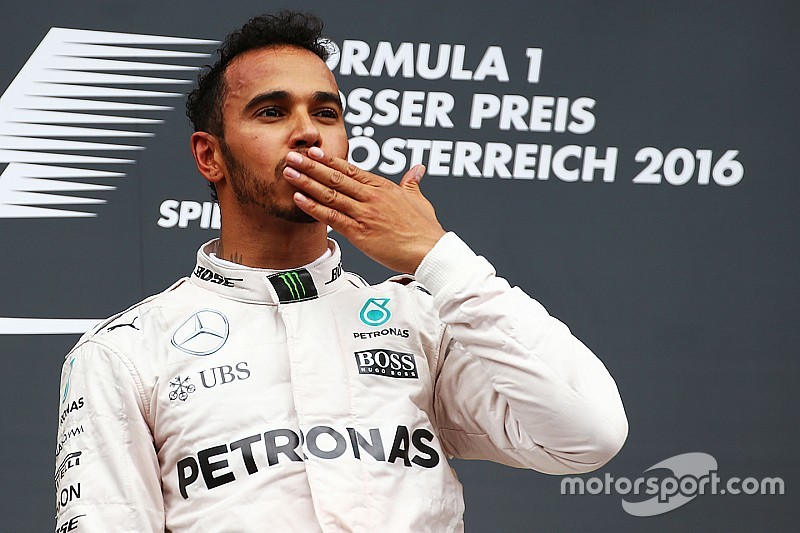 Austrian Grand Prix winner Lewis Hamilton believes his last-lap collision with teammate Nico Rosberg was not "controversial", and that he himself was entirely blameless.

Hamilton was chasing Rosberg for victory in the closing laps of the race and was within striking range on the final tour.

The reigning champion got a good run on Rosberg out of of Turn 1, trying to pass his teammate round the outside, only for Rosberg to block him by going straight on.

As Hamilton turned in, the duo collided, eventually leading to a front wing failure for Rosberg - and while Hamilton then cruised to victory, Rosberg crawled home in fourth, allowing Max Verstappen and Kimi Raikkonen through.

Asked about the crash after the race, Hamilton said: "I don't feel either way, I don't feel it was controversial.

"Nico mad a mistake into Turn 1, clipped the kerb and went wide. I got a good run on him, he blocked the inside and I went outside.

"I was on racing line, he was on my blind side, I assumed he was there. I went very wide and as I started to turn, I was on edge of the track and he collided with me.

"My guys said he had something up with the brakes, maybe, I am not sure exactly what happened, I came back onto the track as quick as I could."

Having won the race, Hamilton was loudly jeered by fans on his arrival to parc ferme and during his podium interview.

Asked about it in the press conference later, he said: "Of course it is not great.

"One of the most beautiful countries to come here, the motorbike I have here, driving through the valleys - so to have that feeling and that response when you win, it is not the greatest.

"I forgive them, sometimes that is the way it is, they have a right to have an opinion. Not quite sure why they have done it, it doesn't make any difference, I won the race."