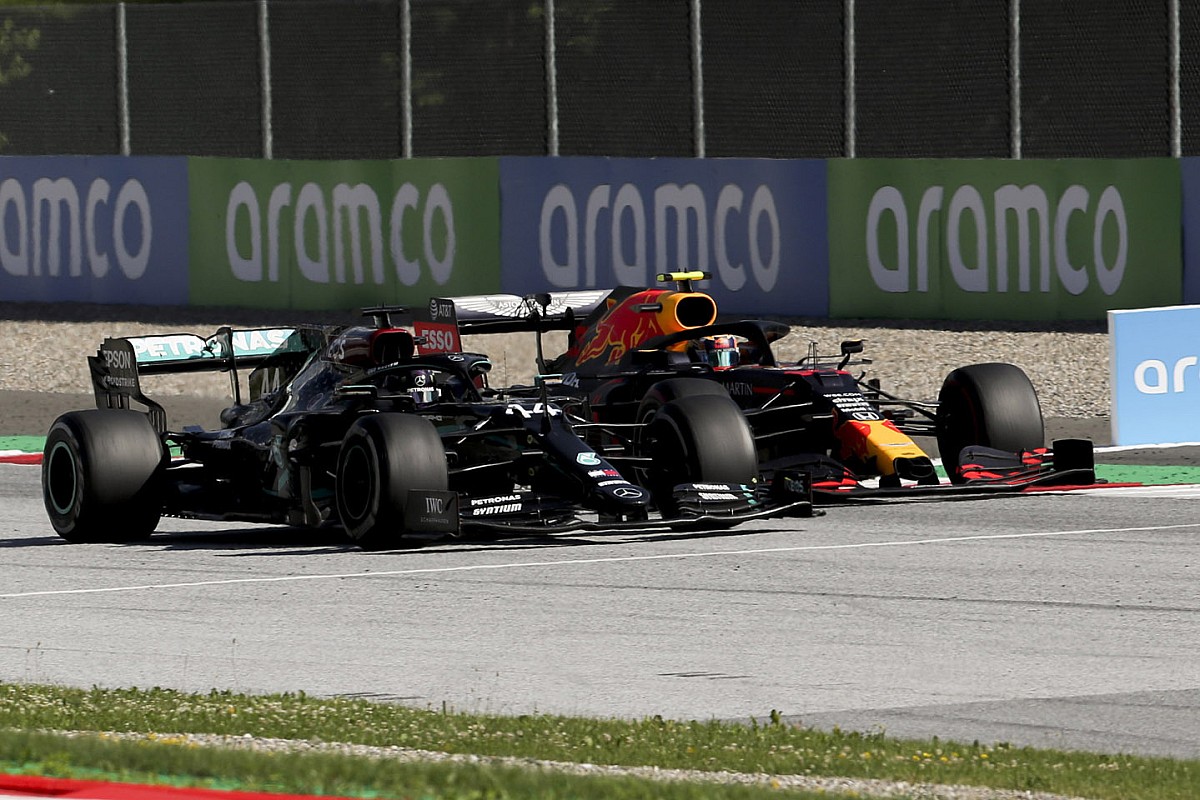 Mercedes Formula 1 driver Lewis Hamilton insists that there's "no bad blood" with Alex Albon despite being penalised for the second time in three races for a clash with the Red Bull driver.

In Austria the pair made contact after the final safety car restart when Albon – who was on fresher tyres – made a bold overtaking move on the outside of Hamilton.

The incident closer mirrored one at the penultimate race of 2019 in Brazil, when Albon also tried to pass in the closing laps.

On both occasions Albon was sent spinning and lost a shot at a podium finish, and Hamilton was subsequently awarded a five-second penalty. In Austria that dropped the world champion from second to fourth place.

Hamilton insisted that the circumstances were different in both cases, and while he accepted responsibility for Brazil he thought last weekend's contact was a racing incident.

"Well firstly I have a huge amount of respect for Alex," he said. "I think he's a super talented young man, and I don't have any bad blood or bad feelings towards him whatsoever.

"In Brazil, he saw me coming straight to him. That was for me wholeheartedly my mistake and my problem and I tried to face it with dignity. I think today was, in my opinion a racing incident.

"He was on a much better tyre. I entered the corner committed in blocking – obviously I was defending the position. I took the corner as normal, I had quite a lot of lock on to get round the corner.

"The track drops away when you go through that corner. So a lot of people understeer through there. However, I didn't get back on the power, I just continued to decrease in my speed, and he jumped on the power, being that he had so much grip.

"He still had like a car's width to the left of him. And ultimately, we touched. I think it's unfortunate that we collided, and I wouldn't want to ever collide with anybody.

"I do think it was unfortunate, but I have to respect the decision that the stewards ended up taking, there's nothing you can say otherwise about it."

Hamilton pointed out that in his initial TV comments he thought he might be to blame, but changed his mind on viewing a replay,

"Before I'd seen the incident I did apologise to Alex, in an interview. Just because in the heat of the moment, you don't always have the viewpoints of everything, and I didn't want to jump to conclusions, and obviously then I went to watch the replay and I think it was a racing incident, as I said."

FIA race director Michael Masi said that the stewards decreed that the clash was a clear case of causing a collision.

"From what the stewards saw and having looked at it, Alex obviously had some momentum around the outside," said Masi. "The contact point, from what I've understood from their explanation, Lewis's front left to Alex's rear right, was why they did not deem that a racing incident.

"They felt that Alex was effectively on the edge of the track, give or take, and had completed the overtaking manoeuvre. For them there wasn't anything more to add. It was a quite simple driving infringement for causing a collision."