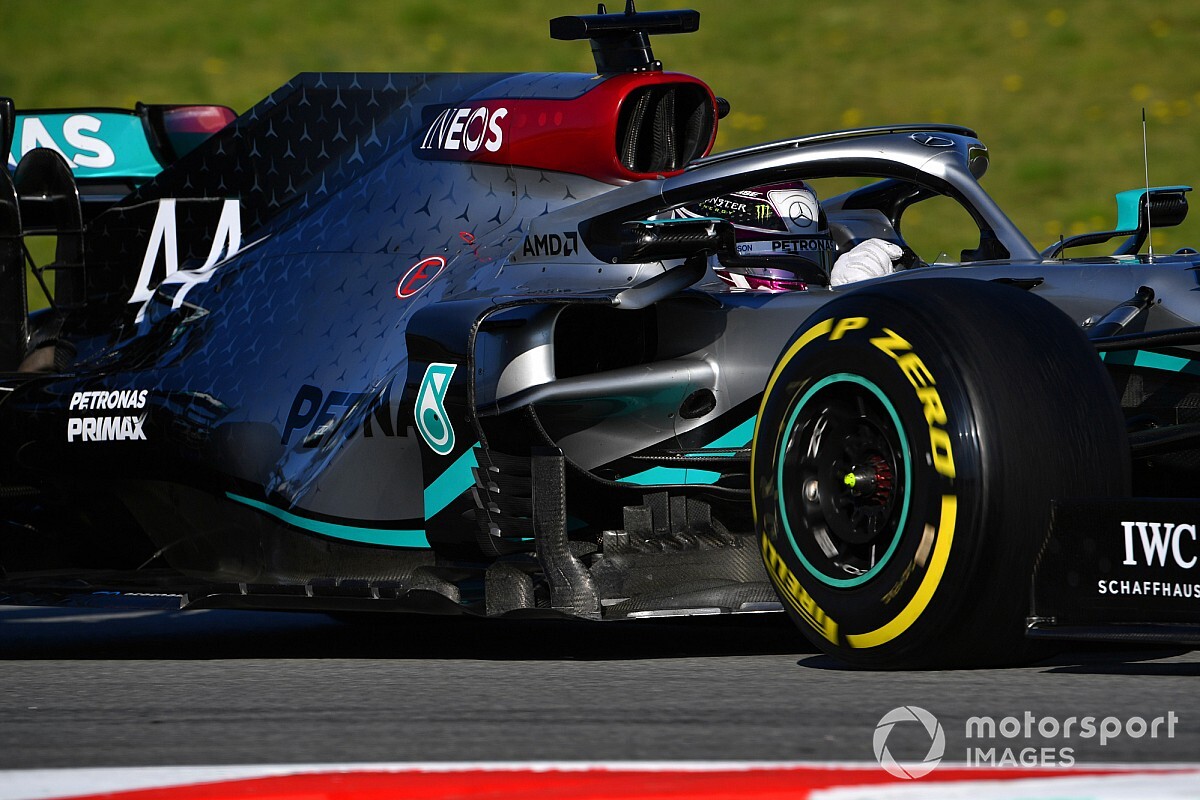 Lewis Hamilton has urged his Mercedes Formula 1 team to "hit the ground running" after the enforced break from competition.

Hamilton says he's in regular contact with his colleagues and is trying to find ways to ensure that the team is up to speed when racing resumes.

"I do hope I'm going to come back better," he said in a Mercedes video interview. "We're probably going to get in the car and have Friday practice and we're all going to be as rusty as hell!

"So it will be really interesting to see how we hit the ground running. But I've been on the phone with my team, speaking to Bono [Peter Bonnington] and speaking to James [Vowles], and trying to discuss with them a plan.

"I think we all need to make sure we arrive utilising all the tools we have like race simulations – I probably will get in the simulator, which I don't always love – but utilising those tools to make sure that when we come to that first race, we hit the ground running and we're ready as if we've not missed any of the races.

"It's how can we arrive in Austria like we've already done eight races? That's going to be the real challenge. I don't know if we're going to be able to do it, but that's a good goal to have."

Hamilton believes that everyone should be striving to improve themselves during the enforced break caused by the COVID-19 crisis.

"I we, if I, if you are not improving, and growing during these days, then what are we doing,?" he said. "You're obviously just wasting your time, sitting on your backside.

"There's nothing going to be handed to any of us, we've got to go out there and get whatever we want, and you've got to want it more than the person you're fighting against. And you've just got to get off your arse and do it.

"I'm in pretty decent shape, but I can always be in better shape. I see things and I think, 'Damn, I've got a bit of fat here, shoot I've got to work harder, I've got to go for a run.'

"In actually reality I don't really have much fat! But there are people out there that have these things going through their minds, but you've just got to let go, find what it is you like, and say I'm going to do it, I'm not going to let anybody get in my way."

Hamilton says he has been enjoying his own company during the break, and has been keeping his mind occupied.

"Mentally it's really about ultimately feeling good about yourself, it's about finding a way to make sure you love yourself, and be comfortable on your own.

"I've been really spending time to take time for me, making sure that I appreciate me, acknowledging things that you do well, acknowledging also when you fail and you don't do it so great, it's OK. And not being so hard on yourself, all these different things.

"I have days when I wake up and feel groggy, I don't feel motivated to work out, I feel, 'Jeez, where are we going, should I continue racing?'

"I think all these different things. The next hour it passes, and I think I love what I do, why would I ever consider not continuing?

"You've just got to keep your mind occupied. I've tried to read as much as I can, I've been getting into meditation. I'm a fidget, it's really, really hard to do meditation for me. Sitting there, moving around, then there's bugs on my arm, it's really hard! The more and more you do it, like with anything, the better you get at it."

When an F1 modern classic arrived out of nowhere

What kind of Ferrari driver will Sainz be?