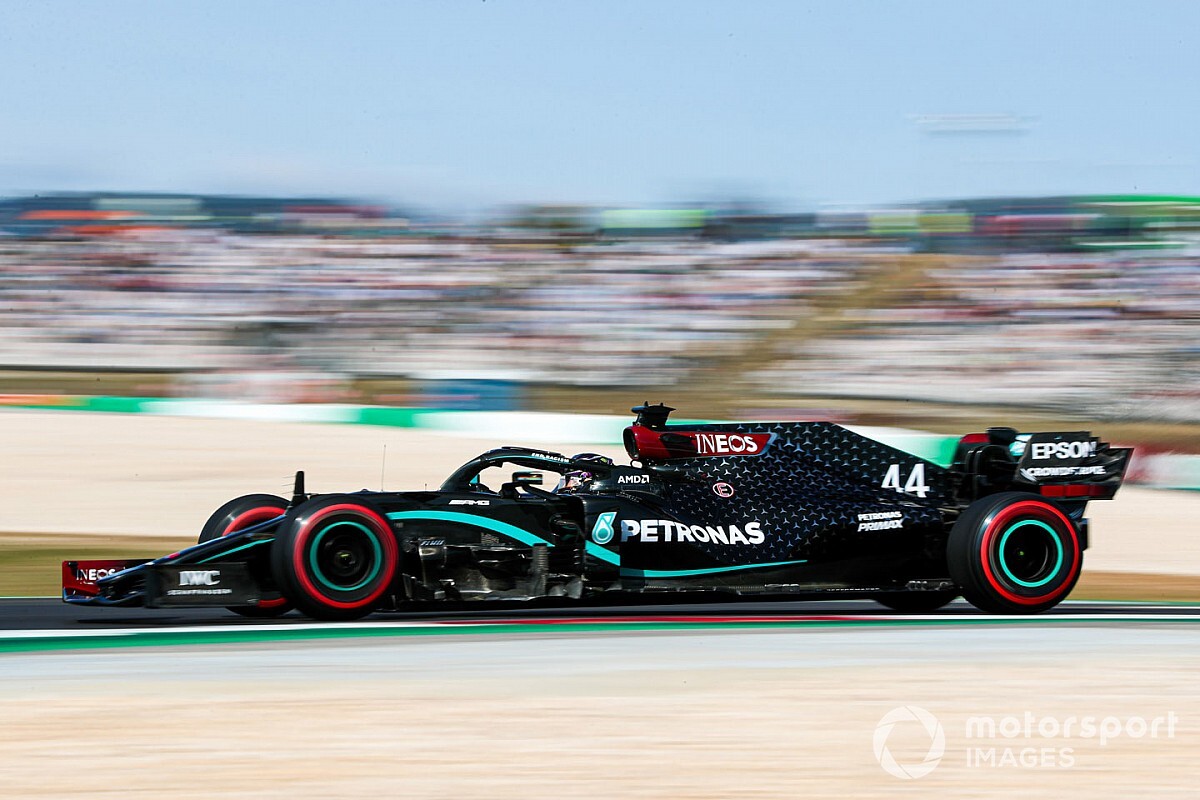 Mercedes has managed to cure the one weakness its long-wheelbase Formula 1 car concept has had in terms of difficulty with corner rotation, says Lewis Hamilton.

The German car manufacturer has differed from other teams in electing to run a longer car during the latest rules phase.

While the length of the car offers greater opportunity for improved downforce – as there is more car area for airflow to influence – it has meant it is not as nimble in corners as shorter rivals like Red Bull.

While Mercedes has always believed that its long concept is the right way to go for the current rules set, it has had to battle hard to try to overcome the increased difficulty its drivers face in getting the car rotated in corners.

Hamilton says that he has been surprised other teams have not pursued the Mercedes idea, especially now that the team made changes this winter to the W11 that have helped it wipe out its problem area.

“With last year’s car for example, we had the longest car,” he said. “It’s definitely been a bit of a surprise to see that none of the other teams have gone to the longest car.

“We’ve been winning with the longest car since 2017, and they [other teams] are so stuck in the way they do things, in that ‘we’re still going to keep our car shorter.’

“Being that it’s a long car, it’s obviously got great downforce, but it’s not as nimble as a shorter car. Last year our car was good through medium and high-speed corners, but was quite poor in low-speed corners. The car would not rotate as well as we’d like.

“We started this year in winter testing and the car had similar characteristics. I had some challenges that I put towards the team in terms of how we set the car up, which changed that. It’s difficult to say too much but that difficulty we had last year with the car rotating, we don’t have that problem any more.”

Hamilton says he is a driver who always prefers a responsive front end to a car, which has not always been something that Mercedes has delivered in recent seasons.

However, he says dialling out the setup characteristics has not been the work of the moment, because of the complexity involved in ensuring a change in car balance does not hurt the tyres too much.

“I’ve always preferred a more positive front end in the car,” he said. “But there’s a limitation with these tyres. The front has a limitation, the rear has a limitation, grip wise. There’s saturation, there’s thermal deg and there’s only a certain amount you can do with the mechanical balance before it affects the other end. It’s like a see-saw.

“Last year our car was definitely very, very strong at the rear, and the car was generally driven by the rear end. The front was a lot more understeery last year. You struggled a lot more when you go over the tyre [grip] and no matter how much we put the mechanical rearwards it wouldn’t really fix it. This year we have made some changes.

“With the aero balance it’s a much longer process. You can’t just change it. Definitely over the winter we fixed it and moved the aero balance more rearwards, so the car was shifting different, and also at different steering angles and different yaw. So it definitely is working a lot better.”

For a full interview with Hamilton, where he talks about his role in developing the Mercedes car and opens up on his working relationship with Mercedes, click here.