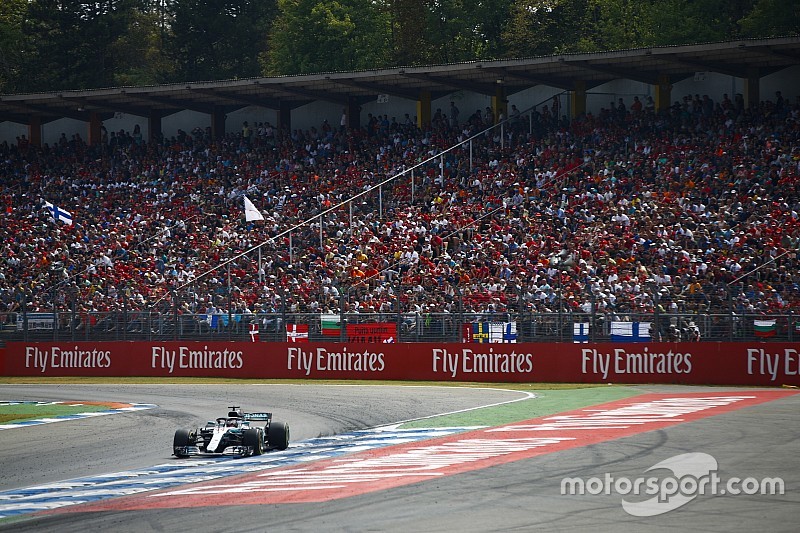 Lewis Hamilton says booing fans at the German Grand Prix only served to inspire him as he pulled off an unlikely comeback drive to victory.

The Briton recovered from a mechanical problem in qualifying at Hockenheim that left him down in 14th on the grid to take a surprise win that moved him back to the top of the world championship standings.

And having faced the brunt of some jeers over the weekend from fans of title rival Sebastian Vettel, Hamilton said that the reaction he got actually made him more determined to do well.

“There was a lot of negativity before the race,” said the Mercedes driver. “You know, I think when you come to England, going around I don’t remember any of the fans booing. We’ve got quite a good group of fans in England.

“And when I came here, there was a lot of booing. The weird thing is that I was really happy about it. It was unusual. It’s weird that I’m still happy.

"It was because I kept seeing individually, a couple of different British flags in amongst a hundred or a thousand [others]. It was a sea of red and then you’ve got a British flag in there.

"That’s why I said at the end, that love conquers all.”

While Vettel and Ferrari made a big deal of winning on Hamilton’s home ground at Silverstonea fortnight ago, Hamilton said he had no desire to respond with similar gloating messages after his German win.

“Honestly, I don't need to search for a boost or energy from other people’s business. I just focus on mine,” he said.

“I’m just focussed on trying to be the best I can be in myself. Because the best me… if I’m my best and my higher self, I feel like I’m able to drive like I was able to today, regardless of all the people and who else is around doing whatever they are doing.

“So, I did say when I came here that you can see things and they can often be maybe a sign of weakness. As I said, if we just kept our heads down, we knew this weekend Ferrari were going to be quick – and they’re ridiculously quick on the straights.”

He added: “I’m just really proud of my guys as well, not getting phased by this fight that we’re having. They could easily jump to conclusions and say, oh well, they’re doing this or they’re doing that, instead of, you know what? All we can do is control our own destiny.

“All we can do is work on our starts, try and improve, make sure we do a better job understanding the car, doing a better job, pushing for better aero performance, all these different things.”