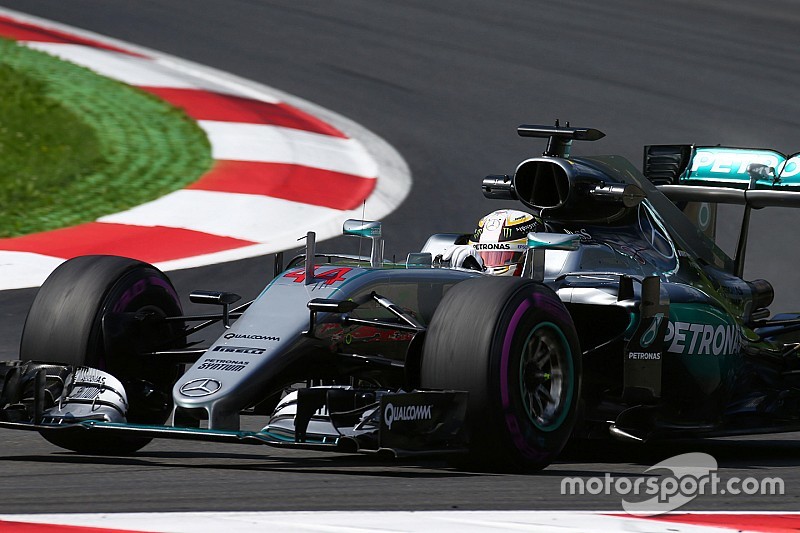 Lewis Hamilton believes rival Ferrari may have the upper hand in terms of race strategy after qualifying on the supersofts on Saturday.

Hamilton secured pole position with the ultrasoft compound, the same tyres he used for his best time in Q2.

Ferrari rivals Sebastian Vettel and Kimi Raikkonen, however, used the more durable supersoft in Q2, meaning they will start the race with it.

Vettel starts from ninth place after a grid penalty, four places behind Raikkonen.

The mandatory tyres for the race are the supersoft and the soft, meaning Ferrari does not need to use the ultrasoft tomorrow.

Hamilton admitted starting on the ultrasoft may be tricky, as the tyre's lifespan has proved to be short around the Red Bull Ring.

"I just did what I was told," said Hamilton when asked about qualifying with ultrasofts. "I think our strategists understand that the ultrasoft was a better tyre.

"We had the supersoft available. I think they saw, I am guessing, Ferrari go out and see if we can do the time, even though there is a time delta.

"Naturally a hard tyre goes further so it doesn't seem such a bad option they have gone for. That is not a bad thing.

"I think the ultrasoft is not a good tyre for the race so it will be a struggle to get a lot of laps out of it. It will be interesting.

"I hope I have an advantage at the start from being on the softer tyre. In practice, my tyre lasted for four laps. Nico says five, so definitely will be tricky and we will do the best we can with it."

Rosberg, who starts from seventh after a penalty, is also expecting the ultrasofts to make things hard in the race.

"Tyres will be tough tomorrow. We don't know because the temperature will drop so much. For sure, in the heat, it was really tough but maybe in the cold it will be better. We don't know."