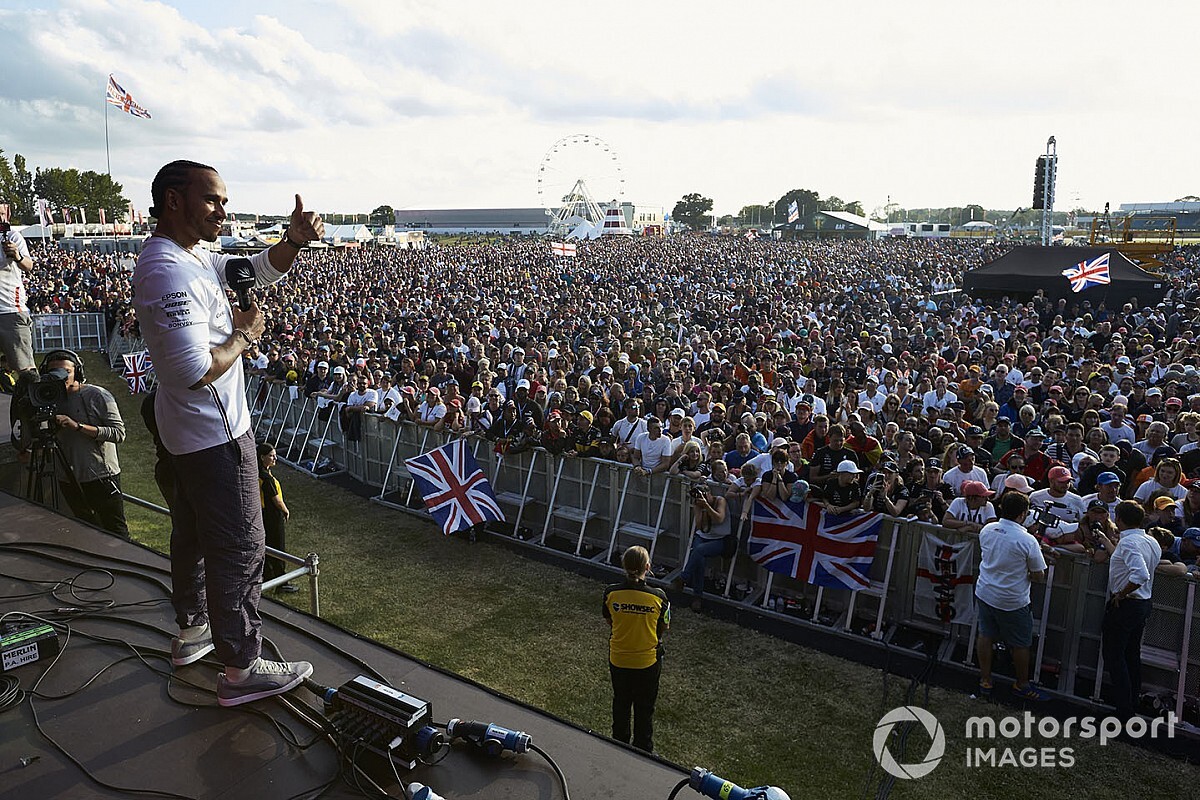 Silverstone will host two closed F1 races – starting with next weekend’s British GP – in the second double-header at the same track of the pandemic-disrupted 2020 season, after the Austrian and Styrian GPs at the Red Bull Ring.

The track and the local police force issued initial warnings to F1 fans in the UK last month, and have been moved to do so again in the run up to the two Silverstone races, while Hamilton answered questions on the topic at last weekend’s Hungarian GP.

The Mercedes driver will be racing on home soil alongside fellow British racers George Russell and Lando Norris – the first F1 drivers to compete in their national events without home fans present.

When asked about the police warnings by Motorsport.com, Hamilton said: “It's not my job to come up with rules and tell people what to do.

“What I see on TV is people out trying to live their lives during this difficult time, but this thing continues to spread.

“So, I always just try to encourage people to keep their distance and remain at home.

“And us holding an event, which we're really trying to remain [focused] and always keep our distances from everyone whilst we're doing our job – I can understand people will want to go and watch from a distance, just to get the sound of the car or to get a sneak peek of the car.

“But if that means that you're in a crowd of other people, that's definitely not a good thing, and I wouldn't advise that."

Silverstone boss Stuart Pringle explained that the warnings were needed to avoid the two British races being jeopardised.

“The government requirement is that you can run this event if people are not present,” he told Motorsport.com.

“It therefore flies in the face of that completely if we allow people to be present – and that includes congregating at the front gate to see whether they can catch a glimpse of drivers coming in and out.

“[And] you won't because they're staying on-site in motorhomes, the vast majority of them.

“And there's a lot of concern in the community around Silverstone.

“It’s that these sporting events should not be a magnet to bring people to their locality and increase the risk of transmission of this virus.

“The plan we've put together is to comply with the government requirements. And we are doing it and we're doing a thorough job.

“We're just getting the messaging out there – get it out early, get it clear and get it backed up with a bit of authority – so that everybody knows you're serious.”

In a statement released earlier this week, Northamptonshire Police superintendent, Dennis Murray, said: “I want to reinforce our previous messages.

“There will be an exclusion zone around the circuit and F1 fans must not travel to it, but should instead join the millions watching the races on TV.

“My officers will be out and about to target anybody intent on committing crime and there will be teams of officers tightly controlling the area.

“It will not be possible to watch the race from the perimeter fences and anybody attempting to do so will be removed.

“Neither will it be possible to park near the circuit. All laybys will be ‘clear ways’ and any cars left unattended will be towed away.

“I’d also like to take this opportunity to remind people that use of drones will be prohibited throughout both the race weekends - the Civil Aviation Authority has imposed a flight restriction for the entirety of the grand prix season.”

Imola's F1 return will be as two-day grand prix