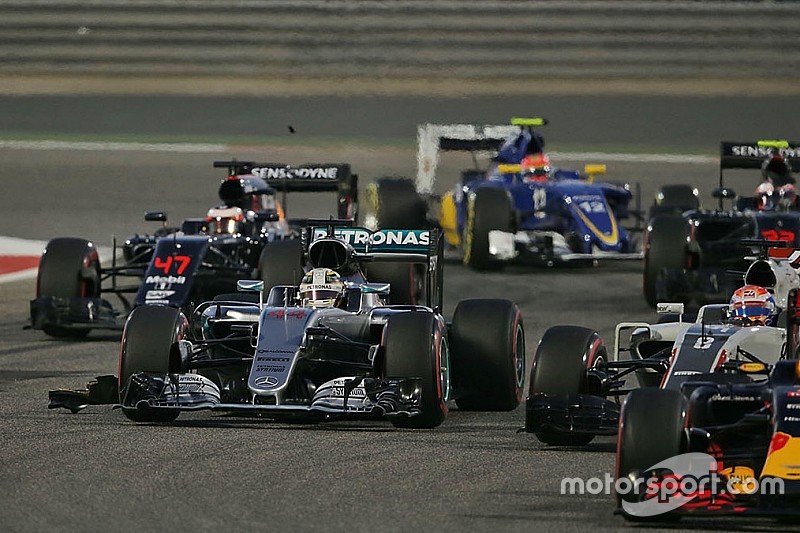 Lewis Hamilton's slow start at the Bahrain Grand Prix was down to an inconsistency in maintaining revs rather than a clutch problem, the world champion has revealed.

The Mercedes drivers suffered another poor getaway at Sakhir a fortnight ago – falling behind teammate Nico Rosberg on the run to the first corner and then getting tagged by Valtteri Bottas in a collision.

Although Mercedes' starts have prompted the German car manufacturer to ponder new clutch hardware, Hamilton has explained that what happened in Bahrain was not related to that.

"No, no, no, it was basically nothing to do with that," he said in an exclusive interview with Chinese TV station Lesports.

Instead, the issue revolved around control of the engine speed which made it impossible for him to maintain the perfect revs for the start.

"In the last race, the formation lap was spot on and I got to the line, I did my sequence thing which was fine, and then the lights came on," he explained.

"I selected first gear and went to get my rpm. Normally, you accelerate and the rpm increases and you hold it - and with the rpm control, it should be relatively easy to hold it there.

"But it was going above and below and above and below. I got my foot to a stable point and the rpm started to drop. So then I had to accelerate more.

"It was easy to accelerate but slow at coming down, so really hard to get it right. And to get the perfect start, it has to be at the perfect amount.

"So four lights are on and I am still trying to find this, and when you do the start you have to look at the lights from four lights up and be focused – that is when you can get the perfect reaction.

"On the last light I have given up trying, so I am like, 'it is going to have to do where I am.' So I look up and the light goes out.

"I didn't want to jump the start so I was over-cautious and started late. The pull away wasn't too bad. I didn't have the worst start, but Nico is already alongside me by the time I have really let go."

With fresh start restrictions meaning teams must now have the same engine map for starts and the entire race, making changes in that area is not easy.

Hamilton confirmed that the engine map would not be altered for this weekend, but said new procedures – which he had worked on in the simulator – had left him confident there would not be a repeat issue this time.

"We will still have the same map – it is just the procedure [has changed] to make it more stable," he said. "I have done some work in the simulator so I am pretty confident in it."

Raikkonen and Vettel got 1st and 2nd in P2 at Shanghai