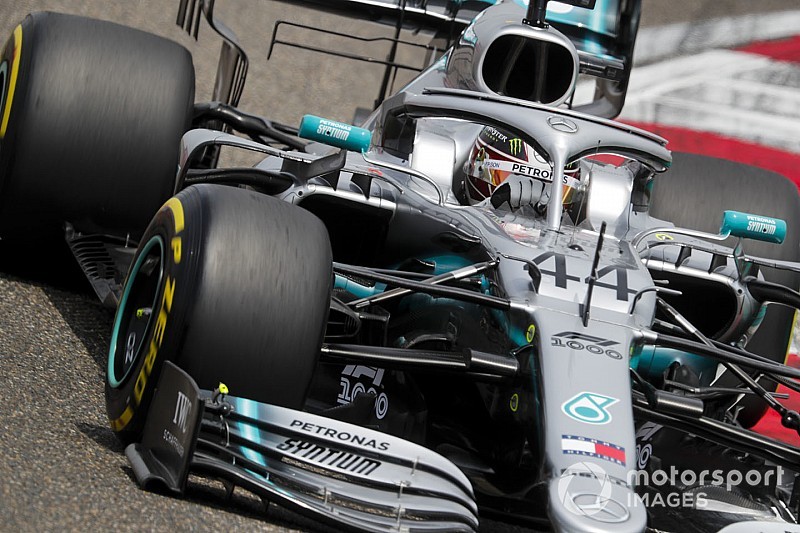 Lewis Hamilton said he was "experimenting" throughout Chinese Grand Prix qualifying after "battling" his car more than his Mercedes Formula 1 teammate and poleman Valtteri Bottas.

Hamilton trailed Bottas by 0.8s in Friday practice and on Saturday, but jumped ahead in Q2 before being edged by the championship-leading Finn by 0.023s when it counted.

Five-time world champion Hamilton said the car "hasn't improved" through qualifying because he needed to work out ways to get more out of it himself.

"I was struggling with the car throughout yesterday and today going into Q2, but I made a couple of changes with some settings on the wheel and changes to the lines, to bridge the gap," said Hamilton.

"Honestly I'm quite proud of the job I've done considering how far I was earlier on in the session. Valtteri's been quick all weekend. He deserves the pole."

Asked by Motorsport.com to elaborate on the changes he made, Hamilton said: "Valtteri was particularly quick in the first sector so I was experimenting throughout the session.

"I think I had the quickest sector in the end but it was a little bit too late. But still it's all about making improvements. It wasn't to do with tyre temperature it was just to do with balance and getting the flow, utilising the grip in the right areas.

"As I said I've been struggling with the car, just battling the thing. It's obviously a great car but the first few races are always quite tricky. It shifts later on in the season and you get a better understanding."

Hamilton said Bottas has been "stellar" throughout the Shanghai event after the Australian GP winner topped Friday practice, Saturday practice and qualifying.

However, Bottas said he was fortunate to be on pole after struggling to find the ideal lap in Q3.

"The lap was OK, not completely how I want it, but luckily it was good enough for pole," said Bottas. "The car has been really good this weekend. Lewis also managed to improve a lot during the qualifying and it was super close."

Mercedes had a three-tenth advantage over Ferrari after being second best on pace in Bahrain despite sneaking a one-two finish thanks to its rival's problems.

Bottas said he was braced for a close race in China as both Ferrari and Red Bull looked in the mix on long-run pace in Friday practice.

"It's been pretty close from the top three teams," said Bottas. "There are many question marks but today's encouraging so we will go for it."

Vettel: Gap to Mercedes "too big" in China