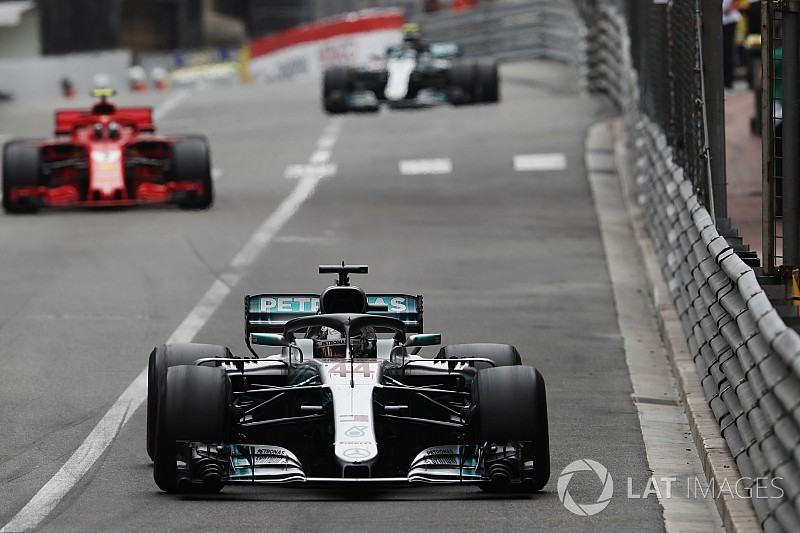 Mercedes Formula 1 driver Lewis Hamilton feels the Monaco Grand Prix “wasn't really racing”, with the leading cars forced to keep to a slow pace for most of the 78-lap event.

The introduction of the new hypersoft meant tyre management was critical for the lead group in Monaco, but with track position crucial and overtaking opportunities scarce at the street circuit, all five frontrunners stuck to a one-stop strategy.

Hamilton stopped as early as lap 12 and had to manage a set of ultrasofts for the remaining 66 laps, visibly struggling with front-left graining.

Despite repeatedly warning his team that wasn't convinced the tyres would last to the end, he finally brought the car home in third, 17 seconds behind race winner Daniel Ricciardo.

After the finish, Hamilton referred to Sunday's event as "the least interesting race", before elaborating in the press conference.

"We were just cruising around from lap six, maybe," Hamilton said. "Literally cruising. So it wasn't really racing.

"I mean, Daniel did a great job today, so super happy for him, but ultimately we were all turned down and just cruising around, making sure we get to the end.

"Which, I don't know if that was exciting for you guys to watch. If it is, no problem."

Ricciardo, who was nursing an MGU-K issue for most of the race, admitted the circuit layout allowed him to get away with maintaining a slow pace out front.

"I think today, because it's a tight circuit, you're able to take the piss a little bit with going slow," he said.

"I mean, there were times when I was really cruising, but the circuit allows you to do that, because it's hard to overtake."

The hypersoft compound will be used again at Formula 1's next race, the Canadian Grand Prix, and Ricciardo is confident the Montreal circuit will not see a similar level of pace management to Monaco.

"I don't think we'll be able to maintain that kind of rhythm in a circuit like Montreal or something. I think that's more circuit-dependent, but I'm glad they're bringing the hypersofts again.

"When we pitted early, I thought maybe it was looking like ever a two-stop race, but honestly we could control the pace.

"But as I said, on a different circuit, I think today would've probably been a two-stop."

Red Bull says Ricciardo's car was 25% down on power

Alonso says Monaco GP "the most boring F1 race ever"